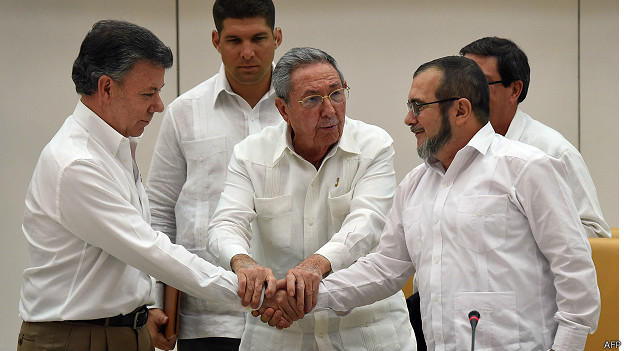 On Wednesday spokespersons from both the Colombian government and the Revolutionary Armed Forces of Colombia (FARC) announced that after years of peace talks they have finally reached a conclusive agreement that will lead to a complete bilateral ceasefire. The historic announcement marks the end of the half-century-long civil war that has claimed over 200,000 lives and displaced millions across the country’s rural areas.

President Juan Manuel Santos and FARC commander Rodrigo Londoño Echeverri (known by the alias Timochenko) shook hands at a ceremony in Havana, where the talks have been held since they began in 2013. Cuban President Rául Castro presided over the event and stood by as Timochenko, the Marxist rebel group’s most senior leader, reached out his hand to President Santos, a former defense minister during the Uribe administration and member of the conservative Party of the U. Also in attendance was Venezuelan President Nicolás Maduro, whose country played a key role in encouraging the FARC to enter negotiations, as well as UN Secretary General Ban-Ki Moon and the leaders of several other Latin American and Caribbean nations.

Santos spoke in jubilant terms about bringing the protracted and bloody conflict to an end, noting that for many Colombians, war is all they know. He said: “Colombia got used to living in conflict. We don’t have even the slightest memories of what it means to live in peace.” Timochenko, holding back tears in an emotional statement, said: “May this be the last day of war.”

According to a joint communique, the two delegations reached a mutual position on safety guarantees for demobilized guerrillas and a program for reintegration into civilian life. The FARC’s leadership is said to have issued an order to “silence all rifles,” which will be followed by a decommissioning process in which all arms will be surrendered and put out of use. The Colombian government will immediately end operations against the FARC in exchange for an agreement to disarm 180 days after the signing of a final peace deal.

Ivan Cepeda, a congressman from the left-wing Alternative Democratic Pole who was an early advocate of dialogue, emphasized that the outcome was not just the result of the efforts of the Colombian government, but also many sectors from across Colombian society including social movements, unions, and human rights organizations. Amongst these groups is Marcha Patriótica, a popular movement coalition of over 2,000 grassroots organizations that organized the historic march for peace in April 2013, in which hundreds of thousands of Colombians descended on the county’s capital city Bogotá to demonstrate in support of peace.

Cepeda also paid tribute to the role of the international community and solidarity with the process from across the world. He noted that in addition to hosting the talks in its capital city, Cuba had along with Norway served as guarantor of the peace talks, while Venezuela and Chile had worked in an accompaniment role.

The talks have been going on since 2013 and deadlines have been extended on several occasions. A final deal in which all of the finalized agreements will be codified together in one document is expected in the coming months. Once signed, the agreement will be put to a referendum in which the Colombian public will have the opportunity to accept or reject its terms.

After a long period of equivocation on the part of the United States, the dialogue belatedly received U.S.-endorsement from Secretary of State John Kerry when he met with representatives of both negotiating teams during a visit to Cuba earlier this year. Representatives from the United States were in attendance along with diplomats from several European nations.

To be sure, the talks have been controversial from the outset. Opponents to dialogue from the political right have argued that negotiating with the FARC, whom they consider to be “terrorists,” has been a dangerous and immoral surrender to violent insurrection. Former President Álvaro Uribe, whose administration engaged in an aggressive counter-offensive against the FARC and other leftist insurgent groups, has been a particularly outspoken opponent of dialogue, even launching a signature drive denouncing the peace talks as promoting “impunity” for the FARC. Uribe’s preferred candidate in the 2014 presidential election, Óscar Iván Zuluaga, promised throughout the campaign to discard the peace talks in favor of a return to all-out counter-insurgency, with the hope to defeat the FARC militarily and force a surrender on less agreeable terms. Santos defeated Zaluaga in what was widely seen as a public referendum on the continuation of the dialogue.

On the other side of the political spectrum, fears have been voiced that a disarmament of the FARC might leave its demobilized members defenseless against right-wing violence. Such concerns are based in large part on the FARC’s experience from the previous attempt at peace in the late 1980s and early 1990s in which several thousands of members of the Unión Patriótica were murdered. The political party, which was made up partially of FARC members but also leftist intellectuals, was formed to provide the radical left a route into electoral politics after the finalization of a peace deal and formal end to hostilities. Indeed, one of the major areas of contention in the current round of talks has been an agreement regarding a path into peaceful politics for the FARC.

But Santos has struck a surprisingly conciliatory tone, arguing for the importance of democracy and the inclusion of all perspectives. Though maintaining that the FARC will always be his sworn enemy, he said that battles would in future be fought through political debate rather than through violence. He said: “Now that we have agreed peace, as head of state and as a Colombian, I will argue, with equal determination their right to express and to continue their political struggle by legal means, even if we never agree. That is the essence of democracy to which we welcome.”

Santos was the primary example of a war monger as Minister of Defense in the Uribe government and one of the most predictable and flagrant human rights violators. His aggressive anti-guerrilla policies included the 2008 incursion into Ecuadorian territory that led to the deaths of over twenty militants and sparked the 2008 Andean diplomatic crisis. However, with his actions throughout the peace process, he has shown himself to be a peacemaker of considerable caliber.

Despite the growing pressure for him to further engross Colombia as the United States’ main ally in South America, he has persisted to present himself as a Latin Americanist and not a U.S. pawn in the region. The way that he has come out in favor of the peace agreement will no doubt be looked back on as one of the major events in Colombian history. Though it is perhaps wise to wait for the referendum by the public, COHA sees Santos as a potential nominee for the Nobel Peace Prize for his leadership throughout the talks.

For the guerrillas, there is terrible risk that they are taking, especially in terms of how the Unión Patriótica genocide decimated some of their leading figures and forced them to retreat back into the jungle. Their decision to take a leap into the unknown by laying down their weapons has been brave and commendable.

Just as the Santos government has a responsibility to move toward demilitarization of the countryside, the FARC too will have to adapt to a culture of non-violence and come to terms with its past. But with the strength of the Marcha Patriótica and other social movements, there is now a strong base for a resurgent left in Colombia to participate in the political process through peaceful and democratic channels.

Though there is much to celebrate, there is also much work still ahead. All parties now need to focus on building institutions that will foster peace and greater democracy for Colombia’s future.