As COHA previously reported, the free trade agreements (FTAs) with South Korea, Panama, and particularly Colombia were overwhelmingly approved, but not without controversy by U.S. legislature, as several Democratic lawmakers and labor unions staunchly opposed the passage of these agreements. Their opposition was based on the claim that workers’ rights would not be adequately protected under the new system. On October 12, 2011, the U.S. Senate passed the long awaited deals through a rare display of bipartisanship with a 83-15 vote for the U.S.-South Korean measure, a much closer 66-33 vote for the trade arrangements with Colombia, and a 77-22 vote for the FTA tie with Panama.

Of the three accords, the U.S.-Colombia trade agreement was attacked the most, even though Panama, the region’s quintessential corrupt society, should have drawn much more negative attention than it did from U.S. policy makers. Right after President George W. Bush backed a trade pact with the South American country in 2006, ranking Democrats like Sen. Harry M. Reid (D-NV) highlighted Colombia’s deplorable human rights and labor rights records and the fact that U.S. workers would be hit hardest in the all but certain event that textile jobs and other factory jobs would be outsourced to any of these countries. Coincidentally, President Obama proposed the USD 447 billion American Job’s Act that was projected at eventually generating new U.S. jobs, but was convincingly stalled in Congress.

Though the FTA could potentially be defeated with a veto from President Obama, this is hardly unlikely to happen as the legislation is set to become law very shortly, but will not be fully implemented until at least the end of next year. Meanwhile, affected governmental bodies and local business entrepreneurs will be assessing the FTA’s economic impact in the coming years.

The powerful oil and mining sector in Colombia, for example, is responsible for the distribution of four-fifths of foreign direct investment coming into the country, despite the fact that the sector generates relatively few jobs. When it comes to expanding trade and advancing economic development, it is important for planners to diversify the economy into primary, secondary, and tertiary sectors (at this point, the manufacturing sector represents only twenty-five percent of Colombia’s economy). New products and services coming from the U.S. could play an important role in strengthening Colombia’s economy, but is imperative that Bogotá doesn’t rely too heavily on mining and oil revenues since per-barrel prices in the international market often dramatically fluctuate. A silver lining in this matter might be Colombia’s commitment to bolster its financial sector by adopting World Trade Organization procedures that will expand U.S. corporate entities’ access to Colombian service markets, according to the Brookings Institution.

Additionally, Colombia’s longstanding problem is its relative lack of global competitiveness—it ranks 68th among 139 countries, according to a survey by the World Economic Forum, due to a number of factors that range from corruption and advanced levels of paralyzing bureaucratic behavior, along with inflation and unemployment. As Colombia enters a more competitive market, it is necessary to implement measures that will lower its unemployment rates, some of which are the highest in Latin America. A strong case can be made that free trade will prove valuable in battling Colombia’s unemployment issue to a degree, but “it is believed that these free trades will create more jobs in some parts of the country than others. Take, for example, South Florida, whose second most important commercial partner is Colombia. The Florida Chamber of Commerce reported that more than twenty thousand jobs will be created and in turn generate about USD 1.5 billion in international trade opportunities.”

Infrastructure upgrade is yet another hurdle to Colombia’s full-fledged development. In a recent visit to Colombia, former White House economist, Larry Summers said that it’s cheaper for Colombia to export from Liverpool to its ports of Barranquilla or Buenaventura than move products from those ports to Bogotá. It also has been noted that Colombia’s rugged geography is one of the main hurdles to expanding its road network, yet it has managed to build tunnels and highways that have noticeably reduced the number of travel hours between Bogotá and the country’s Caribbean region, such as the so-called “Ruta del Sol” (The Sun Route). Colombia’s present efforts to modernize a now aging and often inadequate infrastructure require ample development and expansion, with high-priority projects that include the completion of the new El Dorado Airport in Bogotá, the restoration of railways, the upgrading and construction of new port facilities, and the construction of the Bogotá metro system and trains that connect the city to suburban areas, the countries budgetary pressures will be heavy. 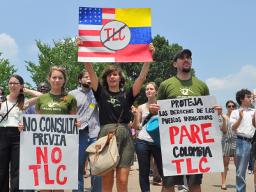 Human rights flaws sit heavily on Colombia’s reputation. As COHA Guest Scholar Robert Works has noted elsewhere, the present Santos administration would be wise to launch a mission of framing a law-abiding state in spite of pervasive political corruption. It must also directly deal with the persistent claims of human rights violations made by U.S. and Colombian union leaders, as well as by the UN’s International Labor Organization, ILO, by working closely with human rights organizations in contrast to the belligerent approach featured by former President Alvaro Uribe, who indiscriminately turned on his opponents.

Finally, one of the many concerns Colombian free trade skeptics have raised is the possible lack of intellectual property protection now that the trade agreement is signed. Both Colombia and the United States need to work out some of the terms that were not included in the original FTA blueprint, such as granting medicinal patents for animal or human treatment.  Conversely, Minister of Agriculture Juan Camilo Restrepo told Caracol Radio that Colombian farmers are not ready for an FTA with the U.S. regarding milk and rice production. As previously pointed out, Colombia must protect its campesinos’ products and their produce must not lose value in order to improve their quality of life, often threatened by natural disasters as well as by guerrilla activities.  Though the outcome of this historic trade agreement will not take effect in the U.S. and Colombia for the next year, now is the time to estimate loopholes and sources of error for both economies.

This analysis was prepared by COHA Research Fellow Robert Valencia.