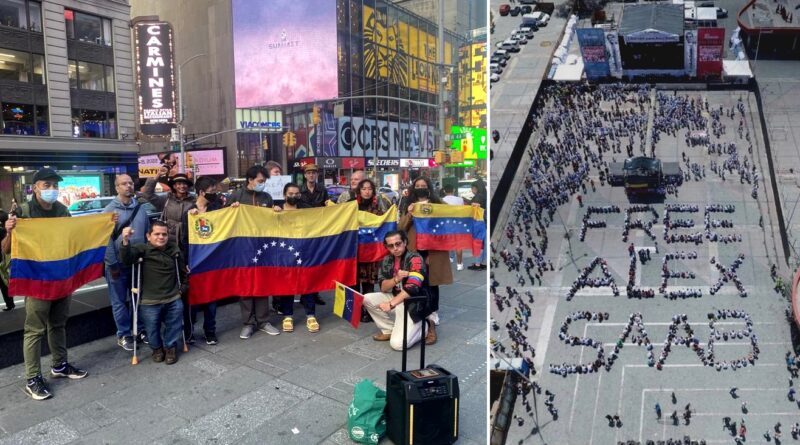 On October 16, Colombian businessman and Venezuelan Special Envoy Alex Saab was in practical terms kidnapped for the second time, first by Cabo Verde under pressure from Washington, and now by the U.S., in flagrant violation of international law.

For nearly a year and a half, Saab had been imprisoned on the island nation of Cabo Verde, 400 miles off the northwestern coast of Africa in the Atlantic. As a Bloomberg article explains, “Saab was detained June 12 [2020] when the private plane he was traveling on from Venezuela to Iran made a fuel stop on the Cape Verdean island of Sal.”[1]  What Bloomberg does not mention is that Saab’s plane was forced to land in Cabo Verde because two other nearby nations in mainland Africa, apparently under pressure from the US, refused to let him land.[2]

There is no extradition treaty and there was no Interpol order

The capture of Saab was made without any proper legal basis. While Washington prevailed upon Cabo Verde to seize Saab based upon the pretext that the U.S. wanted to extradite him for alleged crimes, the United States has no extradition treaty with Cabo Verde.[3] Moreover, while Cabo Verde authorities claimed that Saab was detained pursuant to a valid Interpol notice, a regional court in Nigeria found that the detention took place before the Interpol notice was issued, raising huge concerns about the legal validity of Saab’s detention and imprisonment.[4] 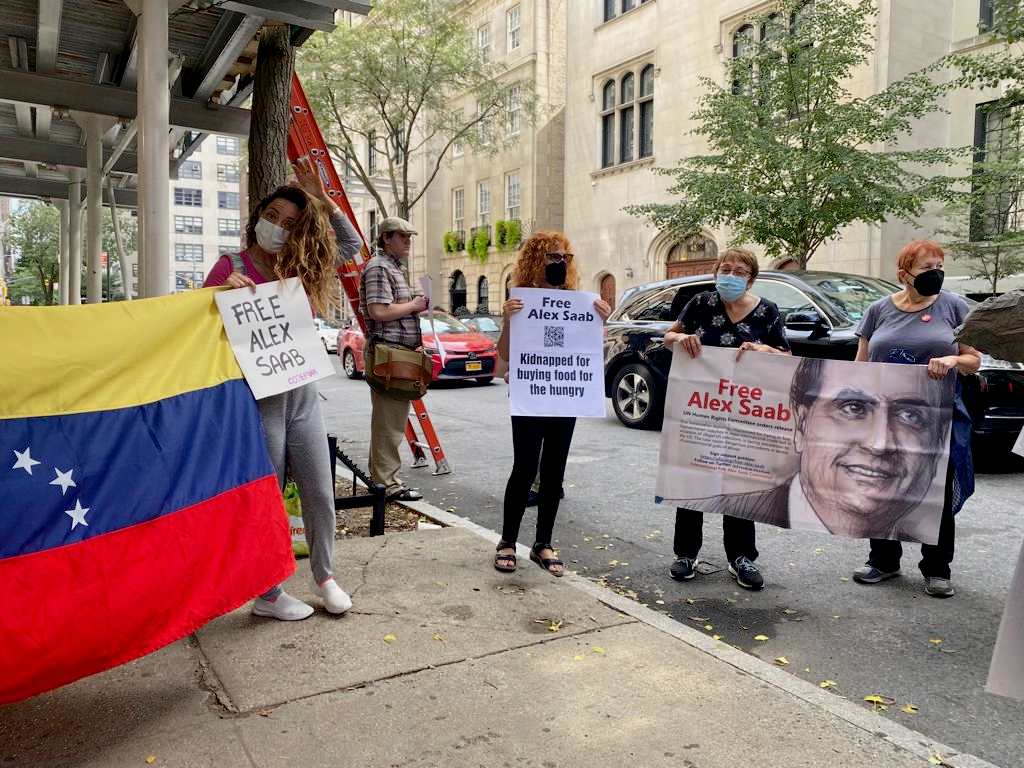 The U.N. also demanded the extradition to be suspended

Indeed, this regional court, The Economic Community of West African States Court of Justice (ECOWAS), explicitly “ruled that Saab should be freed because he was detained before the Red Notice was issued.”[5]  As Reuters explains, “decisions by that court are final and binding under a 1991 protocol.”

And then, on June 8, 2021, the United Nations Human Rights Committee issued a decision for preliminary measures demanding that the extradition of Saab be suspended and that Saab, who is suffering from cancer, be given the necessary medical attention which he has been denied in Cabo Verde.[6]

On September 28, 2021, the African Bar Association issued a statement demanding “the immediate and unconditional release of Ambassador Alex Saab, respect for the ECOWAS Court and the Rule of Law in Africa by Cape Verde and all Governments and Institutions in Africa as the African Bar Association will continue to demand for the respect of treaty obligations and the independence of Judiciary in Africa.”[7]

In spite of the foregoing and the overwhelming opposition to Saab’s extradition amongst the citizenry of Cabo Verde, the Constitutional Court of Cabo Verde approved the extradition of Saab to the U.S. in September of this year.[8]  To put it simply, Saab was kidnapped in Cabo Verde nearly a year and a half ago, and there he was detained, until his “extradition” to the U.S. on October 16th, despite the lack of any valid extradition treaty and any valid arrest warrant at the time of capture. 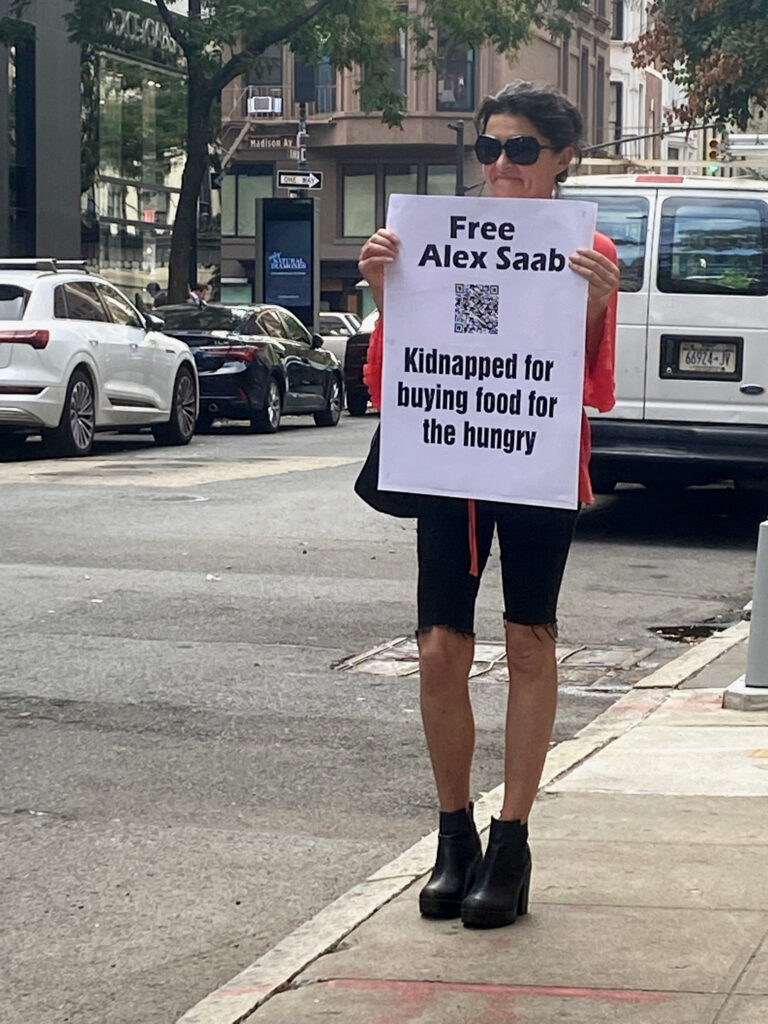 While the allegations against him are hotly disputed, what is not in doubt is that Washington is behind his persecution. And it is also clear that the U.S. is interested in Saab, not because of any alleged crimes but because he may hold the key to Venezuela’s ability to circumvent Washington’s deadly illegal unilateral sanctions. First and foremost, the allegations against Saab involve alleged embezzlement from food and housing programs in Venezuela. Given that the U.S. is sanctioning Venezuela in an attempt, inter alia, to undermine the ability of Venezuela to maintain such programs, it is patently obvious that Washington has no real, bona fide concerns about someone allegedly taking kickbacks from such programs. And moreover, under established U.S. judicial doctrines of comity and forum non conveniens, it is Venezuela which, in the first instance, has the right to try to prosecute such crimes committed within its own domestic jurisdiction.

Bloomberg explains that Alex Saab was on his way to Iran to negotiate the exchange of Venezuelan gold for much needed gasoline supplies.[9]  Due to U.S. sanctions, the oil-rich nation of Venezuela is unable to obtain the necessary chemicals and supplies to refine its oil into gasoline which is needed to generate electricity and to transport goods throughout the country.  In addition to gasoline, Saab was also attempting to negotiate the purchase of food, medicines and other critical supplies which have also been made scarce in Venezuela due to U.S. sanctions.[10]

As explained by Alena Douhan, U.N. Special Rapporteur on the unilateral use of coercive measures on the enjoyment of human rights:

The hardening of sanctions faced by the country since 2015 undermines . . . the state’s capacity to maintain infrastructure and implement social projects. Today, Venezuela faces a lack of necessary machinery, spare parts, electricity, water, fuel, gas, food and medicine. Venezuelan assets frozen in United States, United Kingdom and Portuguese banks amount to US $6 bln. The purchase of goods and payments by public companies are reportedly blocked or frozen. . .

It has been reported that electricity lines are able to work at less than 20 per cent of their capacity today. . . .

An estimated 90% of households are connected to the national water distribution system. Numerous households, however, report frequent cuts because of electricity outages affecting water pumps and the maintenance of infrastructure, and because of the shortage of qualified maintenance staff. [11]

It appears that Alex Saab’s very adeptness in helping Venezuela to get around these sanctions – sanctions which Alena Douhan notes are illegal under international law — is the real reason for Washington’s interest in having him detained and extradited.[12]

As the New York Times explains, while the U.S. has brought vague “money-laundering” charges against Saab, “hard-liners at the Justice and State Departments, including Elliot Abrams, the State Department’s special envoy for Iran and Venezuela,” want to ensure Saab’s continued detention in Cabo Verde lest they “lose an opportunity to punish Mr. [Nicolás] Maduro.”  As the Times continues, the “months long detention of Mr. Saab has stripped Mr. Maduro of an important ally and a major financial fixer at a time when fewer countries are willing or able to come to Venezuela’s aid.  If Mr. Saab cooperates with American officials, he could help untangle Mr. Maduro’s economic web of support and assist the authorities in bringing charges against other allies of the Venezuelan government.”[13] 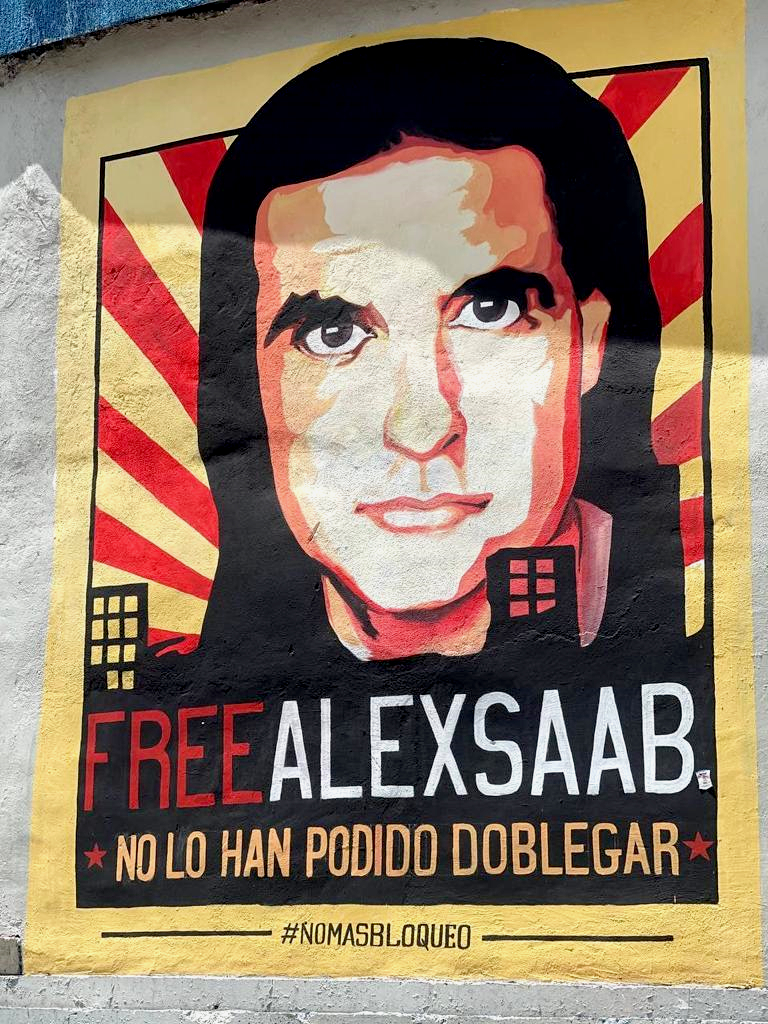 And how did the U.S. ensure Cabo Verde’s compliance in all this?  It has used a carrot and a stick approach. The carrot is significant: U.S. economic development assistance to the island nation. In September of 2020, the U.S. embassy in Cabo Verde announced “the U.S. government would invest $1.5 million in Cabo Verde to support the country’s efforts to mitigate the economic crisis caused by the COVID-19 pandemic.”[14] And in June, 2021, the embassy announced a plan to build a new U.S. embassy adjacent to the government palace:

“This year, July 4 will mark a new chapter in Cabo Verde-U.S. history as representatives of both countries dedicate 4.5-hectares of land adjacent to the Government Palace in Praia as the site for a new U.S. embassy.  This exciting, long-anticipated project represents a more than $400 million investment by the U.S. government in the bilateral relationship, with fully $100 million of that total going directly into Cabo Verde’s economy, benefitting local businesses and contractors and creating scores of construction jobs.”[15]

The stick is the deployment of old-fashioned “gun-boat diplomacy” — a term coined by President Teddy Roosevelt.  Thus, as the New York Times explains, the U.S. had anchored the Navy Cruiser San Jacinto off the coast of Cabo Verde to make sure that Saab did not escape somehow.  While U.S. officials claimed that they were doing this in response to “threats” by Venezuela to take all measures to protect Saab’s human rights, the presence of the gun ship appeared calculated as much to ensure no second thoughts by the government of  Cabo Verde as it was to prevent some rescue attempt by Venezuela or its ally Iran. [16]

Saab’s extradition case is currently before the U.S. Court of Appeals for the 11th Circuit which is to decide whether the U.S. has proper cause to extradite Mr. Saab under U.S. and international law. Quite tellingly, the U.S. prosecution has twice postponed the initial hearing in which it was to present evidence and arguments in favor of extradition. And, it has asked for a third postponement.[17]

The U.S. extracted Saab from Cabo Verde without court sanction

And, so, U.S. authorities, on October 16th, instead of waiting for the 11th Circuit to decide the merits of the case – a case which they will surely lose — have kidnapped Saab a second time, flying him out of Cabo Verde to the U.S. without court sanction.  It is no coincidence that this kidnapping took place, moreover, the day before Presidential elections in Cabo Verde which brought to power a new leader opposed to Washington’s mistreatment of Saab.

Alex Saab is now sitting in a federal prison in Miami. This is a flagrant violation of both international and U.S. domestic law. In addition, this has already had huge international repercussions, with the government of Venezuela suspending scheduled talks with the opposition in response.

The actions of the U.S. and Cabo Verde against Alex Saab have dealt a serious blow to international law and the security of diplomats worldwide. It sets the dangerous precedent that an individual, and especially a foreign diplomat, can be captured and detained without warrant and then “extradited” to the US without a valid extradition treaty and without an U.S. court authorization. This type of action undermines the rule of law, and indeed establishes “the rule of the jungle” wherein powerful countries like the US can simply ignore rights of individuals to due process and to freedom from arbitrary detention to bully developing countries such as Venezuela.

Dan Kovalik teaches International Human Rights at the University of Pittsburgh School of Law, and he is one of COHA’s Senior Research Fellows

[11] Preliminary findings of the visit to the Bolivarian Republic of Venezuela by the Special Rapporteur on the negative impact of unilateral coercive measures on the enjoyment of human rights. Feb. 12, 2021. https://www.ohchr.org/EN/NewsEvents/Pages/DisplayNews.aspx?NewsID=26747&LangID=E Accessed October 17, 2021.