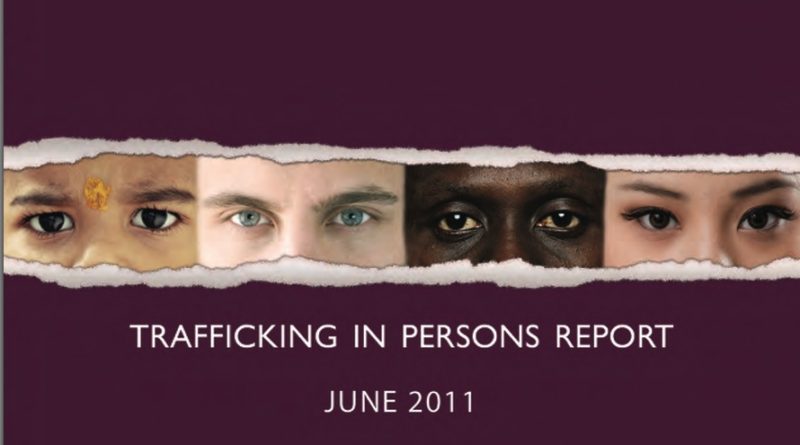 Each year the United States Department of State issues a report on the situation of human trafficking in over one hundred and seventy nations worldwide. With “information from US embassies, government officials, nongovernmental and international organizations, published reports, [and] research trips to every region (meetings with journalists, survivors, traffickers and academic figures),” Washington has prided itself on creating a comprehensive global report that monitors the efforts of governments to combat human trafficking within their respective countries.[1] However, the U.S. State Department has received a great deal of criticism from organizations and other governments around the globe regarding the annual report.

The yearly Trafficking in Persons report (TIP) is used by the U.S. primarily as a diplomatic instrument in order to create and encourage global partnerships and awareness, as well as to promote the combating of all kinds of exploitation, whether it is sex trafficking, forced labor, domestic servitude, or in generating other forms of modern day slavery. In the report, countries are categorized in four tiers based on the government’s dedication to ending this phenomenon: tier 1, tier 2, tier 2 watch list, and tier 3. The four tiers are as follows: countries in tier 1 fully comply with the minimum standards of the Trafficking Victims Protection Act (TVPA), approved on October 28th 2000; tier 2 countries do not fully comply with the TVPA’s minimum standards but are making significant efforts to do so; tier 2 watch list countries do not fully comply with the minimum standards of the TVPA but are making efforts to do so, even though the number of trafficking victims has risen with a failure to produce evidence of increasing efforts to battle trafficking since the previous year; countries in tier 3 do not comply with the TVPA’s minimum standards and do not make any efforts to do so. Countries in tier 3 are subject to sanctions by the U.S. and often experience drawdowns from major categories of funding.

The Other Side
It is notable that the U.S. has included itself in the annual analysis only since 2010 – nine years after the rating program’s inception and the adoption of the TVPA. Not surprisingly, this ironic situation has caused other countries to challenge the objectivity of the report, especially the tier ranking system, after the U.S. ranked itself as a tier 1 country for the first time in the report’s history, in both the June 2010 and 2011 reports. Diplomatic frictions and uproarious controversies have developed as a direct result of the TIP report’s existence, as well as its drawing condemnation by various critics who believe that the U.S. State Department’s unreliable application of the minimum standards mandated by TVPA and artificial country evaluations has jeopardized its credibility. Furthermore, some countries go as far as stressing that the requirements for a tier placement are unclear and even vague in that the State Department “does not comprehensively describe compliance with the standards, lessening the report’s credibility and usefulness as a diplomatic tool.”[2] In addition, unfinished country descriptions diminish the report’s ability to act as a tool to motivate the U.S. to allocate and prioritize government funds on anti-trafficking programs both inside and outside of the country.[3] Moreover, some critics believe that certain countries placed on the tier 2 watch list should, in fact, be placed as tier 3 countries, and vice versa. For instance, an examination of countries placed in the tier 3 category from 2001 demonstrates political apprehension sneaking into the procedure as countries like “Cuba, North Korea, Sudan, and Burma are regularly sanctioned,”  while more “’friendly’ countries with significant amounts of slavery and trafficking,” namely India, Pakistan, and Nigeria, are not.[4]

Another major criticism put forth by governments is the credibility of the TIP report in judging others, especially since the U.S. is now included in its own report.  Rather than relying on the current system, they believe that an international body created or accredited to monitor the performance of states in opposing this trafficking phenomenon would be more likely to produce an objective analysis. The imposition of sanctions and other forms of punishments should also be monitored by such an autonomous body.

The problem is that the U.S. State Department is assessing countries based on U.S. standards rather than on internationally recognized ones. As a result, “many people feel that for the United States to set up a scoring system, which only they control, to rank all other countries is not a helpful way to move forward” and may in fact cause more harm than good in the global arena.[5] Critics must wonder why it took the State Department roughly eight years before it was able to discover that the U.S. is “a source, transit, and destination country for men, women, and children subjected to trafficking in persons, specifically forced labor, debt bondage, and forced prostitution” and, therefore, subject to criticism like every other nation it ranks.[6] In fact, “the U.S. is one of the top three destination countries to which…people are trafficked,” according to the United Nations.[7] Out of the estimated 12.3 million people that are believed to be trafficked worldwide, “an estimated 18,000 to 20,000 people are trafficked into the United States every year, with the actual number of people currently in trafficking situations in the United States estimated to be in the hundreds of thousands,”according to the International Labor Organization (ILO). [8] Although it is illegal in all fifty states to prostitute minors, only “forty-five states had enacted specific anti-trafficking statutes using varying definitions and a range of penalties” since the last fiscal year, 2010.[9]This illuminates the lack of uniformity among U.S. states in their commitment against human trafficking.

The U.S. has increased its overall efforts to combat trafficking since 2010. However, there is a great need for jurisdictions to continue “to formulate varying responses to help decrease arrests and view trafficked persons as victims; several states passed laws decriminalizing children found in prostitution, diverting arrested children into shelters and services, or allowing prostitution convictions to be expunged.” [10] These changes can take time, and officers in the field need to be trained accordingly and evaluated for the effectiveness of their performance on a regular basis.

Greater attention also needs to be given to the rehabilitation of such trafficked victims, specifically as “the prostitution of children has traditionally been handled by some state governments as a vice crime or a juvenile justice issue, and the anti-trafficking approach of the TVPA has been slow to fully permeate the state juvenile justice system.”[11] The incorrect treatment of minors as criminals not only reflects poorly on the U.S. government’s law enforcement system, but also backfires as it discourages victims to come forward to report cases of human trafficking and to receive proper treatment. Accordingly, it is also vital for the U.S. to increase the awareness of human trafficking among its citizens, particularly regarding the misconception that minors who are trafficked tend to be runaways or troublemakers; some minors can be kidnapped and forcibly abducted off the streets.

Culture or Cruelty?
Regionally, many Caribbean islands are especially critical of the TIP report and have brought up several concerns. For instance, as highlighted by Ambassador Bayney Karran of Guyana, local cultural practices have not been taken into consideration when the U.S. State Department conducts its research on the issue of human trafficking. In some islands where products such as rice or timber are harvested, it is common for local children to help in the process. These children are usually members of the immediate family who own the operations, and are not ‘forced’ into labor, but are expected to help out with the shared family duties. One can argue that if minors are assigned extremely challenging tasks and denied their basic human rights like access to food, water, and shelter, among other necessities, and if they are exposed to enduring violence, then such circumstances can be considered forced child labor. However, if these minors are merely helping out with the family harvests, it would be incorrect to paint a picture of abuse, and ultimately, human trafficking in such cases. Similar cultural differences are also relevant in other countries like in Latin America. In Brazil, for instance, it is also common for children to help out with another family’s cultivation by taking on chores in the field as well as in the home, with the same degree of help from the benefiting family later on.

Conclusions
As with any major public report, the U.S. State Department’s TIP report has both its backers and detractors, as well as limitations and biases. The data collected in such reports can at times be disputed, where, for example, one can argue that its accuracy may be sacrificed by time limitations or that the report caters to the present relationships the U.S. government has with the included countries. Regardless of where one’s opinions and preferences rest, it should be acknowledged that the TIP report has been an important instrument that enables both governments and non-governmental organizations to reflect on the existing challenges and accomplishments in their countries. Though it should be taken with a grain of salt, the TIP report should be acknowledged as an advocacy tool to encourage all states to collectively join the battle against trafficking in persons.

An important recommendation for the U.S. State Department might be that it notify countries of the rankings before the report is published, so that countries can have open discussions with the U.S. State Department to see if the rank they received is, in their opinion, balanced. Allowing for prior communication may be a key aspect in alleviating the concerns of the TIP report’s critics and may encourage countries to better collaborate in the battle against trafficking in persons. The U.S. should start acting like a peer, rather than an allegedly impartial judge, by adopting a consultative process. Maybe other countries and organizations would then take the report more seriously, be more interested in eradicating erroneous information, if not propaganda, from its pages, and share Secretary of State Hillary Clinton’s view that “this report sends a clear message to all of our countrymen and women: human trafficking is not someone else’s problem…involuntary servitude is not something we can ignore or hope doesn’t exist in our own community.”[12] Human trafficking exists everywhere and therefore, all countries should work together to stop this modern slavery once and for all.