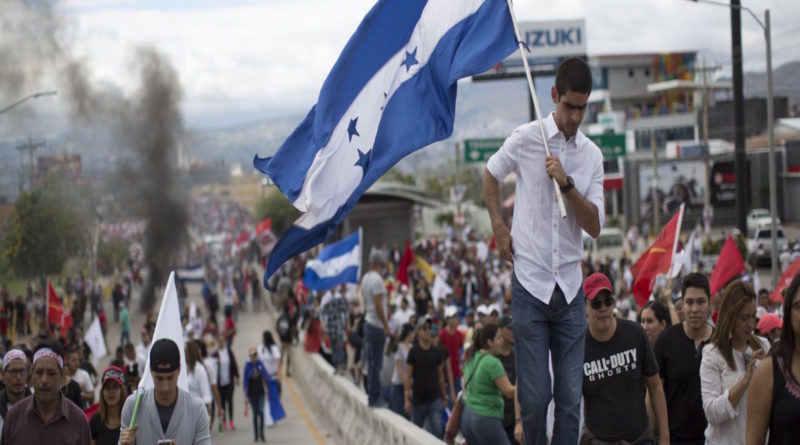 The disparate nature of the State Department’s reaction to the election in Honduras and the call for an election in Venezuela reveals that U.S. policy-makers have prioritized political concerns over the preservation of so-called democratic norms in the region. The result is that the State Department is currently lacking a consistent foreign policy in regards to Latin America and is not up to carrying out what could be an important mandate, but is now little better than a propaganda-based pretense of a policy.

The United States’ reaction to Honduras’ voting process demonstrates a willingness to ignore blatant undemocratic procedures. In the Honduran presidential election held on November 26, 2017, incumbent president and conservative strongman Juan Orlando Hernandez eked out a dubious and narrow victory over challenger Salvador Nasralla, who ran as the candidate of  Opposition Alliance Against the Dictatorship, a coalition which includes the Liberty and Refoundation Party (LIBRE). Electoral irregularities were noted by the Organization of American States and the United Nations, and included an embarrassingly delayed vote count that smelled, if anything, of ballot fixing. Nasralla held an early lead but, after a delay in the vote count, the electoral returns dramatically and inevitably swung in favor of Hernandez. The Supreme Electoral Tribunal attributed this shift to the processing of ballots from parts of Honduras with strong support for Hernandez.

Since the election, thousands of Hondurans have taken to the streets to demonstrate their chagrin at what is happening to their country. The protests have been aggressively suppressed by baton-swinging  police, who have used tear gas and even live ammunition against their fellow citizens. A Honduran human rights group stated that at least 30 civilians have been killed up to now, with 232 wounded, and 1,085 detained by the security forces throughout the course of the anti-Hernandez melee.

Beyond election irregularities, many Hondurans protested against Hernandez due to the fact that the then-incumbent president was seeking to prime himself for his own reelection, which is technically not allowed by the Honduran constitution. Hernandez’s predecessor Manuel Zelaya was ousted by a military coup in 2009 which was partly due to tensions that arose after Zelaya attempted to lift presidential term limits. This hurdle posed no problem for Hernandez since he had controversially obtained permission to run for a second term from the Supreme Court in 2015, which he had managed to stack with his own judicial allies during his stay in office.

On December 18, 2017, the State Department, in a blatant act of co-conspiracy with the Honduran anti-constitutionalists, recognized Hernandez as the winner of the November 26 Honduran presidential election. In the same statement that declared Hernandez the victor, the State Department called on the Honduran people to restrain themselves from violent protests and seek to resolve differences diplomatically. Washington’s response was sardonic in the extreme since it endorsed the Honduran federal election as legitimate despite all the evidence to the contrary. The Honduran government made no effort to address the spate of human rights abuses enacted by security forces in the course of the street protests.

The United States was not alone in its unjustified recognition of Hernandez’s victory, with Mexico, Canada, and the E.U. all falling in line, rewarding him the electoral win despite the evidence pointing to the contrary. There was some dissent on the U.S. side, as evidenced by the 20 Democratic legislators who sought the signature of Secretary of State Rex Tillerson on a petition calling for a new set of elections in Honduras and repudiated what it considered to be the tainted electoral process. However, this minority opinion was overridden by the U.S. policy goal of  continuing the status quo in the Central American country. Regardless of how many independent countries validated the election, American support for Hernandez countered the verdict of almost all external monitors, such as the pro-Washington Organization for American States (OAS), and threatens to further undermine the rectitude of elections in the region. If the U.S. countenances massive electoral fraud in Honduras, what message does that send to the hotly contested race in Mexico? It appears that the United States is supported by some allies in the international community in rendering presidential elections a mockery when political necessity wins the day.

There are some promising developments that reveal attempts to increase the transparency of the of the upcoming Venezuelan election, including the preparations of opposition candidates who are planning to run against Maduro and the commitment of the government to have international observers, including officials from the United Nations, serve as official observers of the election. Despite these efforts towards transparency, both the State Department and some elements of the opposition question the fundamental legitimacy of these upcoming elections.

Potential Explanations for the Differing Responses

One important variable to consider is Washington’s past diplomatic relationships with both Honduras and Venezuela, which can help give context to the large discrepancy that is found in the recent string of State Department responses. Ever since the early 1980’s, the United States has seen Honduras as an indispensable regional ally in Central America, and Hernandez has been entirely cooperative with the U.S. regarding efforts to reduce emigration flows from Honduras to the U.S. border. The U.S. military also has around 500 troops stationed at Honduran military installations, which makes it in Washington’s supreme interest to have a completely stable and cooperative Honduran regime in power, even if this regime is inherently unconstitutional.

In contrast, Nasralla offered a potential interruption of leadership since he had garnered support from a broad coalition of pro-democracy forces in Honduras and anti-imperialist administrations in Bolivia and Venezuela, which could be viewed by the U.S. as contrary to their interests. The prospect of cooperation with Hernandez can explain why the State Department would be prepared to endorse Hernandez’s electoral victory despite claims of a profound lack of constitutionality in the upper regions of government. Washington has endorsed quite a few problematic Central American regimes before, including a range of military dictatorships in Panama, Honduras, and Guatemala, when they were seen as strategic geopolitical allies. In these cases, it was always the Central American nations that paid the high price of misguided and brutal U.S. policy, and it appears that Washington has not yet learned its lesson.

On the other hand, recent Venezuelan administrations have been hostile to the United States, an attitude famously personified in the later life of Hugo Chavez, who served as president from 1999 to 2013. Chavez infuriated the U.S. by forming alliances with Cuba and Iran, which the U.S. saw as threatening to its regional hegemony. Despite occasional efforts at improving diplomatic relations between the two countries, these differences have led to an increasingly adversarial relationship that is now at a boiling point

In President Trump’s State of the Union address, he referred to the Venezuelan government as “socialist dictatorship” and touted the sanctions imposed on some Venezuelan officials by U.S. authorities as a diplomatic success. Trump stated in August that the United States has a “military option” in Venezuela. Although only 20% of Venezuelans support Maduro, the prospect of a U.S. military intervention in Venezuela is vehemently opposed by other Latin American governments. The Trump administration’s narrow-minded focus on preventing emmigration has blinded it to other regional priorities. Trump is willing to tolerate undemocratic figures, such as Hernandez in exchange for support in containing a flow of migrants to the United States. This myopic tunnel vision and deep-seated hostility towards Central American immigrants has led the U.S. to neglect democratic principles by backing corrupt leaders like Hernandez. If the U.S. is not careful, it will bring to birth a new generation of Latin Americans who refuse to stand for U.S. intrusion into and manipulation of the region.

Opposition presidential candidate Nasralla continues to fight Hernandez’s re-election. His supporters have taken to the streets condemning Hernandez’s victory as fraudulent and illegal and decrying interventionism from the country’s semi-autocratic sectors. Nasralla appears determined to provide some opposition to Hernandez’s second term, stating “we remain in the struggle to rescue the country from dictatorship”. It seems that Nasralla does not have support from policy-makers in Washington, and it may be too late to salvage the Honduran democracy.