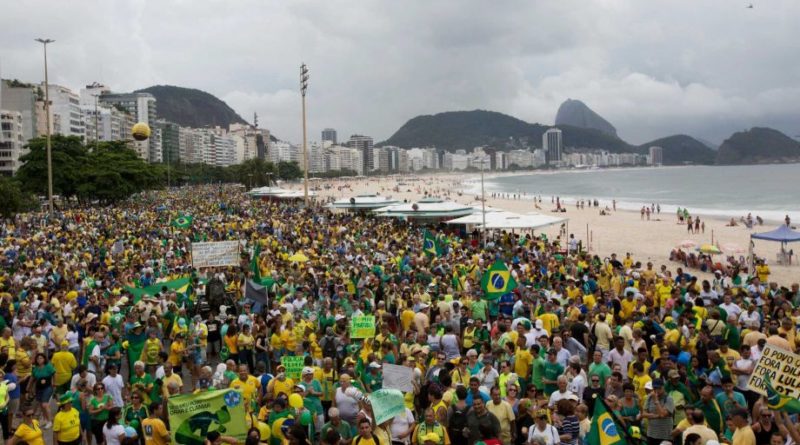 By Esther Fuentes and Rachael Hilderbrand, Research Associates at the Council on Hemispheric Affairs

A wave of pro-impeachment protesters against President Dilma Rousseff representing the largest political event in Brazil’s political history came out in mass demonstrations throughout the country on Sunday, March 13.[1] Some 3.6 million people participated, according to the Military Police, compared with about 2.4 million people attending pro-impeachment protests throughout the country a year ago. [2]

The latest protests are the public face of extreme dissatisfaction with government corruption and the economy. The impact of corruption allegations against former President Luíz Inácio Lula da Silva, a possible impeachment of President Dilma Rousseff, and the country’s increasingly uncertain future motivated participants. While protesters did not push for specific solutions, they demanded immediate change beginning with the current political chaos and the leadership of the Workers Party (Partido dos Trabalhadores, or PT). The mixed motivations behind Sunday’s protests all but guaranteed further uncertainty in a country in which no political leader has appeared to help Brazil and its economy to recover.

Almost daily for the last two weeks, Brazilians have been surprised at decisive developments in Operation Lava Jato (Car Wash), part of the 10,000 million reais ($2.7 billion USD) Petrobras scandal: João Santana, the main PT marketer, was arrested;[3] Delcídio do Amaral, a former PT Senate leader plea-bargained and accused both Lula and Rousseff of involvement in the corruption scandal;[4] Lula was detained for questioning on March 4.[5] Prior to such updates, protests were already being organized for March 13 against the Rousseff administration. [6]

An Overview of Latest Protests

Demonstrations got under way Sunday morning and remained surprisingly peaceful throughout the day[7] in all of Brazil’s states.[8] Pro-impeachment protests also took place in countries where large numbers of Brazilians are living, including the United States, Portugal, England and France.[9] Organizers said protesters in Rio de Janeiro along the Copacabana beach numbered roughly 1.5 million people (the Military Police issued no estimate).[10] In São Paulo, Brazil’s most populous city, the Military Police estimated attendance at 1.4 million people, while the Datafolha Research Institute estimated there were 500,000 participants;[11] both sources agreed it was the largest political event ever in Sao Paulo, even surpassing the numbers that assembled  in the end period of the military dictatorship in 1984. (Those gatherings, known as the Diretas Já – Direct Elections Now- protests, were extremely significant as participants demanded direct elections.)

On Sunday, other record-breaking protests in Brazil, according to Military Police estimates, took place in the city of Curitiba, where investigations for Operation Lava Jato are based and roughly 160,000 participated; in Recife, the state capital of Pernambuco, the state where former President Lula was born, some 120,000 protested; and in the capital city of Brasilia about 100,000 people protested. [12]

Despite the record-setting numbers in the pro-impeachment protests, the profile of those attending remained the same as the pro-impeachment protests a year ago. Most participants were from the upper and middle classes and have a high level of education compared to the national average.[13] Rafael Alcadipani, a researcher at Fundação Getúlio Vargas (FGV), said the profile of protesters in Brazilians may have changed over the years. Compared with those in 2013 mass protests against the rise in bus fares or in 2014 against the World Cup, this month’s pro-impeachment protesters tended to be older, wealthier, and less diverse.[14]

The Role of the Opposition

Sunday’s protests were primarily against Rousseff, Lula, and the PT in general. The current administration’s approval ratings are the lowest since the end of the military dictatorship.[15] Over 75 percent of the Brazilians polled have evaluated the Rousseff administration as bad or very bad; 17 percent rate it as average, and just 9 percent rate it as good. Roughly 67 percent of the population supported Rousseff’s impeachment prior to Sunday’s protests, although it is speculated that such heavy disapproval is caused not only by corruption allegations, but also by current economic crisis. Such low approval ratings could help explain the high turnout this weekend.

Events were marked by a strong appeal to opposition parties; a number of opposition politicians received notable support from protesters. But Sunday’s protests also showed some differences compared with previous pro-impeachment protests. At the previous protests, major parties such as the Brazilian Social Democratic Party (Partido da Social Democracia Brasiliera, or PSDB) and opposition politicians like Senator Aécio Neves of the PSDB were more highly regarded than when they participated on Sunday, when their approval dropped sharply amongst the protesters.[16] Neves and the governor of São Paulo, Geraldo Alckmin, also of the PSDB, both attended the protests in São Paulo but did not stay long since they were dismissed by protesters claiming they were “opportunists.”[17] Both have also been involved in corruption scandals and so are seen as not greatly different from Rousseff or Lula. Neves, for example, was also cited in Amaral’s and four others’ plea bargains in the Lava Jato operation.[18]

This weekend’s protests show that the future of Brazil remain uncertain in a number of ways. Whether Rousseff will remain president is unknown. Estimates of the political risk consultancy Eurasia Group put her survival chances at 50 percent.[19] Any new political leader ascendancy to the presidency is also undetermined, considering that a number of politicians who could take her place if she is impeached or chooses to resign also may face corruption charges.

Becoming increasingly likely day by day is the continuation of Rousseff’s impeachment process. According to many reports, the weekend’s protests created a new sense of urgency for it. Before this weekend’s events, the process was moving slowly within the Supreme Court due to an overload of other cases, many related to corruption allegations. Pablo Ortellado, a professor of public policy management the University of São Paulo (USP), said the protests “confirm this crisis scenario. The political and institutional forces are feeling supported, legitimated to continue in their attempts to remove the president.”[20] Jairo Nicolau, a political science professor at the Federal University of Rio de Janeiro (UFRJ) agreed, saying Sunday’s protests “were very expressive and give force to a wave that begins to strengthen the removal of the president.”[21]

Aside from strengthening efforts to continue conducting an impeachment process, the protests do not determine whether such actions will happen. The process can be lengthy, and a new leader will need to emerge. President Rousseff’s impeachment is not being driven by the Petrobras scandal but rather by the fiscal irregularities in the federal budget, another example of corruption. If she is impeached, her successor will face not just a harsh political crisis, but also an economic crisis that does not have a short-term solution. On one hand, the decision of the PMDB (Party of the Brazilian Democratic Movement), the PT’s main political ally, whether to withdraw from the government in 30 days will be relevant.[22] Withdrawal would be key, considering that the PMBD holds five ministry posts, the second-largest number of Chamber of Deputies seats and the largest number of Senate seats. [23]

The current situation is even more concerning in light of what would happen the day after Rousseff is ultimately impeached. Who in the eyes of Brazilians has sufficient legitimacy to lead the country out of its political and economic crisis? If her impeachment does occur, a political leader who can govern Brazil may not currently exist to replace her. Considering that opposition politicians were rejected by the public at Sunday’s demonstrations, it is evident Brazil’s political instability goes far beyond these impeachment proceedings. According to Brazilian law,[24] if Rousseff is impeached the current vice-president, Michel Temer of the PMDB, will replace her, but if Rousseff’s 2014 campaign in 2014 is proved to have been illegally financed as accused by the opposition party, PSDB,[25] then Temer will also have to resign. Next in line would be the current president of the Chamber of Deputies, Eduardo Cunha of the PMDB, who would be responsible to call new elections. However, at the moment Cunha is also accused in the Lava Jato Operation.[26] Finally, if he is prosecuted and unable to succeed the president, fourth in line would be the president of the Senate, Renan Calheiros of the PMDB, who was also mentioned in Amaral’s plea bargaining.[27] Brazil is entering an unprecedented, extremely polarized period with high political tension. An allegedly corrupt president may be impeached, investigations of a former president and a number of prominent senators and public officials continue, and yet those who remain to step up and provide political leadership are also accused of corruption. As Brazil’s corruption cycle continues, the public demands change but is uncertain who will lead the nation or what options for change exist.

By Esther Fuentes and Rachael Hilderbrand, Research Associates at the Council on Hemispheric Affairs