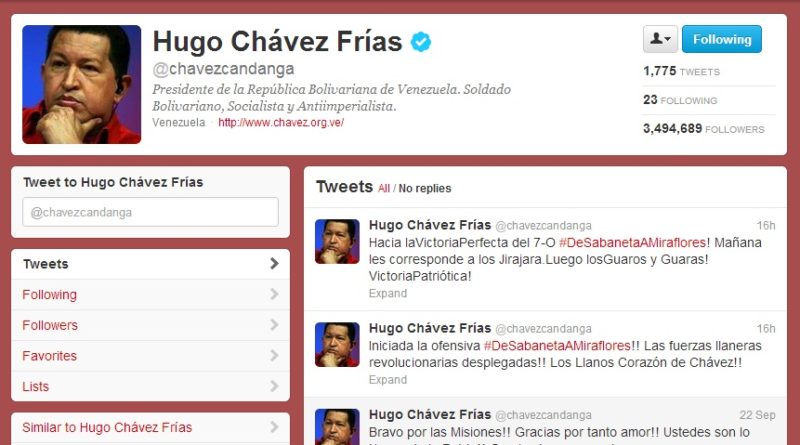 The internet has taken Latin America by storm as a growing percentage of the region’s population has become linked and connected to the virtual world. Latin American politicians and people of substance are not far behind as a growing number of them have their own social media accounts, such as Twitter and Youtube, in order to connect with more of their constituents. Like elsewhere in the world, Latin America is witnessing an exponential rise in internet usage by politicians and governments, aside from the rapidly growing role it plays in finance and commerce. 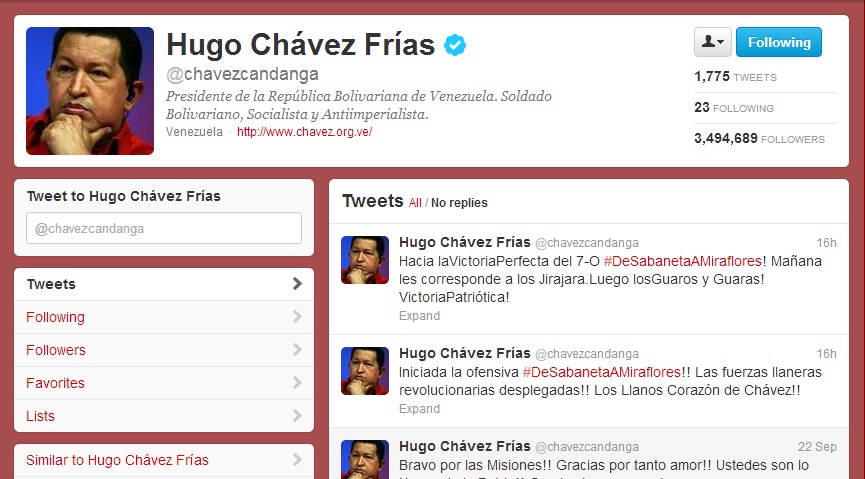 According to a comprehensive June 2011 report by the Western Hemisphere Security Analysis Center entitled “The Internet in Latin America: Online Publics, Social Media Use and the Impact of Diffusion,”  as much as 34 percent of Latin America’s population in 2011 had internet access. The report highlights how the quickest growth of internet users in the region is found among the middle and lower classes. “In Argentina and Brazil, more than one-half of the population now belongs to this new ‘digital middle class’ […] These families perceive digital literacy and internet access as a way to complement a poor and rather ineffective public education system,” (P. 16) the report argues. Nevertheless, there are glaring exceptions to this assumption regarding the growth of e-users. For example, “Costa Rica is one such case where patterns of socio-economic inequality still prevail when it comes to connectivity rates: more than one-half of all Internet users in the Central American nation belong to upper or middle income families, and 47 percent have a college education” (P. 17).  In any case, it is clear that every year we will see growing numbers of Latinos becoming users. Brazil is a good case study of this growing trend; a recent study made by a company called Ibope Nilsen reported that 83 million Brazilians were online during 2012, revealing a 7 percent increase compared to the first three months of 2011.

The percentage mentioned above will only grow in the coming years, not just because of expected income growth, but also thanks to technological improvements. As wireless communications improve, new technologies will become cheaper to mass produce, which inevitably will drive down the price of obtaining wireless hardware (such as mobile phones and laptops with internet connection). In addition, we will see better reception and stronger internet signals reaching more isolated geographical areas in Latin America, such as the Amazon. For example, members of one of Peru’s indigenous groups in the Amazon, the Boras, already have internet access, including Facebook and Twitter accounts, demonstrating how the virtual world is already reaching even the most remote Latin American areas.

In recent years, the world has witnessed how national leaders use social media in order to reach more of their citizens and reach out to improve their means of communication. One of the best examples of this is U.S. President Barack Obama, who held the first ever online town hall at the White House on March 2009. According to the Associated Press, over 10,000 questions were submitted. The current U.S. leader also held the first ever Twitter town hall on July 2011. Afterward, in January 2012, he held another online town hall,  where he answered questions while in a live web chat room; users were able to watch and submit queries to the American head of state via Google and YouTube. The Obama White House also has unveiled a mobile app. Not to be outdone, the Republican Party held a Twitter town hall of its own on July 2011.

Latin America is not lagging that much behind when it comes to e-politics. In fact, several Latin presidents have their own Twitter accounts which are frequently updated. Some of the most prolific Twitter account users include Venezuela’s Hugo Chávez, Colombia’s Juan Manuel Santos and Peru’s Ollanta Humala.  But this fondness for constantly using social media like Twitter is not always the case; for example, Brazilian President Dilma Rouseff’s account has not been updated since December 2010. Most tweets by heads of state are fairly generic, such as Santos praising the capture of a guerrilla leader, or Chávez congratulating a Venezuelan Olympian winning a medal during the past London Olympics, both of which could have been written by a staffer. Nevertheless, there has been at least one incident in which the Twitter-sphere took on a more personal nature. In recent months there has been an increasingly nasty fallout between Santos and former Colombian President Alvaro Uribe, which started after Santos and some of his cabinet members attempted to improve relations between Caracas and Bogotá. The arguments between the one-time allies spilled over to the virtual world as Uribe tweeted his opinions regarding some of Santos’ decisions. The current Colombian head of state once tweeted “Yo no lo llamo cada vez que manda un tweet, no lo puedo llamar porque si no, no podria gobernar yo” (I don’t call him whenever he tweets, I can’t call him as then I wouldn’t be able to govern).

Latin American politicians have also slowly begun to utilize other virtual outlets to reach a wider audience. For example, A 2009 commentary by the Center for American Progress, a Washington DC think tank, explains how Chile experienced an internet revolution regarding its style of political campaigning leading up to the 2008 municipal elections and the 2009 presidential elections. More recently, in May 2012, Youtube aired a debate between the Mexican presidential candidates. When it comes to Mexico, media reports regarding the recent presidential elections have touched on the candidates’ ages and their knowledge of technology. For example, a January 30, 2012 article in Mexico’s newspaper La Jornada reported how several young presidential candidates are known for utilizing their Blackberry phones in order to be online (such as Ernesto Cordero, 43, or the eventual winner of the Mexican elections, Enrique Peña Nieto, 45).

In addition, in June 2012, the Colombian political party MIRA organized its first virtual conference, bringing together over 500 party delegates, connected from 42 different geographical areas around the country. Meanwhile, in Argentina, numerous political parties and candidates have created their own Facebook and Flickr accounts and have been trying, at the same time, to attract “cyber volunteers” who will spread their party’s ideas and goals through blogs and other social media forums.

Nevertheless, experts have argued that Latin politicians are simply utilizing the internet in the same way they would use a TV, as an outlet for their message.  For example, prior to the recent Mexican presidential elections, a Mexican reporter for Revista Mexicana de Comunicacion mused that “for some politicians, having a digital campaign means to simply hire a team that will publish in social media outlets the next event or interview […] or [use the internet] to attack his opponents.”

It is clear that more Latinos will gain internet access in the coming years, and that politicians will increasingly resort to the virtual world to gain the popularity that they covet. Furthermore, governments will be able to better communicate and interact with their citizens. The U.S. seems to be in the vanguard of this trend, considering that besides the aforementioned White House app, the State Department created an office of eDiplomacy in 2003.

Nevertheless, it is debatable to what extent government officials both in the U.S. and in the rest of the Western Hemisphere are able to fully understand the internet, how it operates, and its possibilities. During the 2008 elections, former Republican candidate John McCain famously admitted that he was computer illiterate and that “I use the Blackberry, but I don’t e-mail, I’ve never felt the particular need to e-mail.” However, McCain did state that he was learning how to surf the net and that he visited a number of websites, including news outlets and blogs.  Furthermore, regarding heads of state who appear computer literate and who are known tweeters , the question remains as to how many of them write their own tweets and how many delegate such activities to their public relations team. As previously mentioned, besides the Uribe vs. Santos argument that took over Twitter, most Tweets by heads of state are fairly generic.

It will be important for the next generation of Latin America politicians to be more aware of internet-related issues, particularly as topics ranging from cyber crimes to online copyright laws and online freedom of expression become more prevalent in the region. Furthermore, e-commerce and ways of e-communication coming from other regions  are advancing in Latin America at a rapid pace. At a recent meeting dubbed Festival of Media Latam 2012 recently held in Miami Beach, in which some 600 media and marketing professionals attended, a representative of internet giant Google highlighted how Latin Americans were rapidly embracing the four screens (namely PC, tablet, smart phone, and television). Furthermore, studies show that the e-commerce industry in Latin America  doubled from $22 billion USD in 2009 to $43 billion USD in 2011. Given this developing reality, it becomes critical that future Latin American policymakers are capable of drafting comprehensive and intelligent laws to protect cyberspace and its users. To be fair, there have been some hopeful signs. In 2004, the Organization of American States drafted a strategy on cyber security while the OAS’s Inter-American Committee Against Terrorism (CICTE) published a similar declaration this past March.

Will we reach the point in the near future when government leaders in Latin America will be expected to be computer literate? It may be too demanding to expect politicians to be able to write the code for a piece of software or even maintain their own daily blog. However, it may become self-evident in a decade or two that the new generation of politicians across the Western Hemisphere who grew up during the Web 2.0 era will be able to personally service social media outlets like Twitter, Facebook, and Youtube.

A basic knowledge regarding information technology among policymakers in Latin America will become even more crucial as cyber crimes become more prevalent and more damaging. The next generation of Latino political leaders would be well advised to know more about how the internet works apart from knowing how to log in to their personal email or how it can help to record votes during the campaign season.

Exclusive rights can be negotiated

COHA Senior Research Fellow W. Alejandro Sánchez was recently invited to contribute as a Fellow at the International Cybersecurity Dialogue, a new think tank that aims to “promote real time in person dialogue between technologists and policy makers in business and government.” Recent publications by Sánchez on Internet and Cyber-Security issues include:

“The E-Freedom of Speech in Mexico: Journalists, bloggers and the drug cartels.” VOXXI. August 24, 2012. Available: http://www.voxxi.com/mexico-journalists-bloggers-cartels/