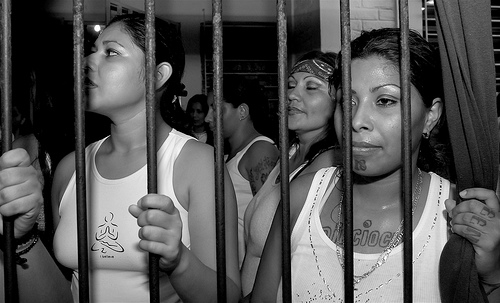 While men have predominantly run drug trafficking organizations (DTOs), women have participated in them since the 1920s. Their role may have appeared miniscule compared to that of their male counterparts, but they have played key roles such as drug mules and bosses. According to an interview with Howard Campbell, professor of anthropology at the University of Texas-El Paso, conducted by the Latin American Advisor, women, such as Ignacia Jasso de González (alias ‘La Nacha’) and María Dolores Estévez Zuleta (aka ‘Lola La Chata’) were prominent figures in drug dealing and trafficking in the 1920s and 1950s. [1]. Although women have been active in DTOs for many years, even at times taking on dominant roles, only in the past ten years have they become increasingly visible in the media. The notion that women do not regularly participate and are not affected by DTOs is demonstrably obsolete. Women today are acting as equal partners in all aspects of drug trafficking, from running crews to laundering funds, resulting in the rise of incarcerated and violently treated women. [2] A glance into women’s association with DTOs reveals an increased crime rate, as well as the adversities that drug trafficking predictably brings upon them, and a clear lack of solutions to these often dangerous conditions.

Direct Effects of Drug Trafficking
In this era, it comes as no surprise that women have become more involved in the drug business. In the past, women could be counted on to struggle for their right to be loosely a part of a male- dominated world, not only in Latin America, but also around the globe. Over time, women have tended to enter many industries that were previously appealing to men. The same is true with drug trafficking, a very profitable business, with between USD 18 and  USD 35 billion in drug earnings per year, according to U.S. authorities. [3] It is not surprising that women gradually have increased their degree of participation. Once men started recruiting women as paid mules, their involvement escalated, as did the degree of violence.

Government efforts to impede drug smuggling have only increased the level of women’s participation in the business because women were less likely to be associated with drug trafficking and, therefore, could sneak past security with relatively small amounts of narcotics in their chests, or swallow pellets containing drugs. This second method of transportation could be highly lethal if the “swallower”, as they are known, does not make it to the destination in a timely matter, as the packet will disintegrate causing an overdose. [4] Because a woman could use her appearance to bypass security officers, DTO affiliates began attending beauty pageants held in Latin America in order to approach contestants with the lures associated with drug trafficking and the income it is capable of providing. One example of an extremely successful woman is famed Colombian beauty queen and lingerie model, Angie Valencia, who was supposedly using other young, beautiful models to transport drugs in an international cocaine ring. [5]

Unfortunately, many women are willing to become a part of the drug industry because of their dire economic situations, and the fact that these dangerous missions were capable of rewards of thousands of dollars. The possibility of easily obtaining money to sustain a deluxe life style for their families is appealing to many women who consider drug trafficking as the one way they can gain access to a spectacular life. In addition, women are probably drawn to the excitement, mystery and power of drug trafficking. [6] By way of narcotic smuggling, some women are able to attain opulent lifestyles.

While some women are able to reach a high rank in DTOs, most women who get involved are taken advantage of because they lack alternative economic opportunities. These women are often easily convinced to act as drug mules and are assured it will be a quick and easy trip. The risks are not adequately explained, and, in fact, some women are even sent on missions, totally unaware that they are carrying drugs. What is even more distressing is that women continue to involve themselves in the business, blind to the consequences or too preoccupied with the chance to escape a life of degradation. Coletta Youngers, an expert on the subject finds that, “many of these women are single and poor mothers.  The fear they may be ending up in prison or getting involved in the drug business is trumped by their need to provide for their families.” [7]

Indirect Effects of Drug Trafficking
Government crackdowns on drug cartels not only affect women directly, impacting those who may be working as bosses or mules, but also indirectly through a resulting increase of prostitution and sex trafficking. [8] These industries present an alternative when governments place heightened scrutiny on DTOs. According to the International Organization for Migration, sex trafficking alone can produce USD 16 billion a year in revenue in Latin America. [9] With such high profits, they are obvious choices to mobilize in the midst of increased government control.

Women also get coerced into joining DTOs because of rivalries between competing cartels. As reported in The Guardian, “the big rise in the number of women working for Mexico’s cartels comes in the context of the drug wars raging between different trafficking organizations and between them and the authorities.” [10] These violent altercations often result in deaths of loved ones, usually a boyfriend, husband, or other family member who was providing an income from drug trafficking. When this occurs, the woman in the relationship is often forced to take over as the breadwinner. Trying to get a legitimate job may be very difficult if the woman has little to no experience or is uneducated; in this scenario, she will most likely enter the drug business and carry on where the deceased member left off, since she may already have easy access into the business.

According to Howard Campbell, drug trafficking affects women indirectly even when “women do not smuggle drugs but are negatively impacted by the male smugglers with whom they are associated.” [11] If a woman’s husband or boyfriend is in a DTO and storing narcotics in the household, he may very well be under suspicion from the authorities, and his house could be raided at any given time. The woman may be held responsible for the drugs if the true owner is not present, regardless of the circumstances. This was the situation for Veronica Vasquez, who was interviewed by the Los Angeles Times on women in the drug war. Vasquez said her husband “wasn’t at home the night the army came calling and didn’t have time to dispose of the bags of cocaine he had hidden in the bedroom. Now she’s serving five years in the crowded prison in Culiacan, the capital of Sinaloa, and he’s still free.” [12]

Overflow of Women in Prisons
The increased involvement of women in the drug industry is not only a problem for the women themselves; it affects the region’s crime rate and prison systems as well. Prisons in Latin America are quickly becoming filled with women imprisoned for drug trafficking; The New York Times reported that since 2007, there has been a 400 percent increase in the number of women jailed in Mexico for activity mostly linked to organized crime. [13] Considering that many countries in Latin America lack proper laws to deal with drug crimes, it is no surprise that women are overflowing the prisons. In some countries, a drug mule can face the same amount of time in prison as a murderer. [14]

There is a critical need for more government intervention and clarification on punishment for drug trafficking, particularly since there now appears to be more women imprisoned for drug-related crimes than men. A study conducted in 2010 concluded that overall, there are more men than women in the Latin American prisons, but a higher percentage of women in prison for crimes involving drugs. [15] As is evident, women will continue to be jailed for drug related crimes and the prison system will suffer overcrowding and worsening conditions unless legislation is adopted that can more forcefully control drug trafficking and related violence. More importantly, this legislation must be properly enforced.

Femicide Emerges
The rise of the number of women in prisons and the surge in their crime rate are symptoms of a prominent issue in Latin America, known as femicide. Femicide refers to the mass killings of women, and reflects the excessive masculinity that is associated with the drug industry.[16] The use of women is often resorted to modes of retaliation against the government for its crackdown on drug trafficking, or as a threat to other DTOs. In May 2011, a 20-year-old woman’s decapitated head was found inside a phone booth, with a message warning the government to stop policies aimed at impeding criminal activity. [17] Drug trafficking seems to heighten the attitude that women are easily disposable, even though women often hold the family together in these societies. Femicides destroy family structures, forcing children to grow up in an entirely unstable environment. Furthermore, increased violence toward women creates an image that it is acceptable. Although femicide remains an issue for all of Latin America, it has a greater presence in parts of Central America. For example, the amount of murdered women has tripled in four years, from 2005-2009, in many Mexican states from 3.7 to 11.1 per 100,000,[18] and María Virginia Díaz Méndez, of the Center of Women’s Studies in Honduras, states that, “Honduras comes in second to Guatemala for the highest femicide rate”.  [19] Despite growing trepidation of femicide throughout the region, it appears as though there are little to no consequences for committing such crimes.

Where can we go from here?
From big-name beauty queens to poverty stricken women, drug trafficking has the potential to affect every woman’s life in Latin America. Drug trafficking is no longer a man’s world, and it continues to involve women at an increasing rate. As drug trafficking increases, it promotes violence against women and further cripples the legal system.[20] It is a very difficult issue, as policies aimed at cutting down drug trafficking seem only to exacerbate the victimization of women. Nonetheless, there is a need for better laws and efficient enforcement to curb the many pressing issues that drug trafficking poses.

It was perhaps inevitable that women would become involved in the drug trafficking industry. As Guadalupe Correa-Cabrera, an assistant professor of government at the University of Texas at Brownsville and Texas Southmost College, observed, “globalization, technology and modernization have facilitated the incorporation of women into…drug trafficking activities.” [21]  Although foreseeable, no one could have predicted how tragically it would affect women, and it has now escalated into a seemingly immutable situation. Perhaps the only solution is to forcefully push government officials in Latin America to take more aggressive action against the human rights violations that inevitably crop up and the violence that emerges from drug trafficking. Until then, the future faced by growing numbers of women affected by drug trafficking violence remains bleak.