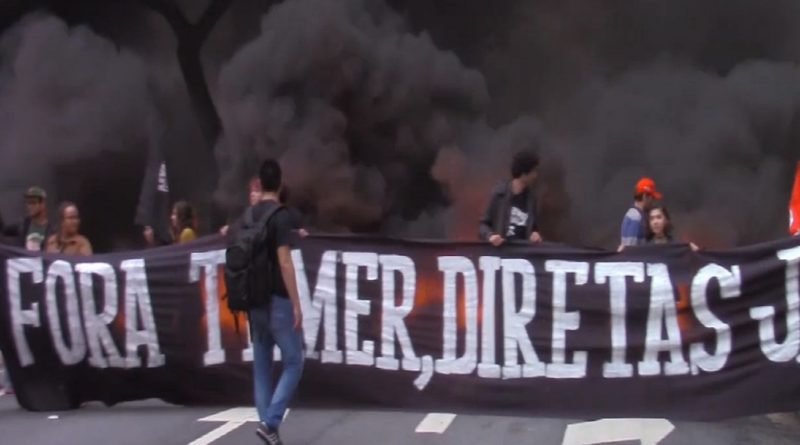 By Brian Mier, Extramural Researcher of the Brazil Research Unit at the Council on Hemispheric Affairs

This documentary was shot in Portuguese, and translated by the author.

As I finished interviewing Luiz Gonzaga “Gegê” da Silva for COHA on April 27, 2017, he mentioned that he and a group of people from his squatter’s movement were going out early the following morning to shut down Avenida 23 de Maio, one of São Paulo’s main thoroughfares, during the morning rush hour as part of the nationwide General Strike.  He invited me to come along. Gegê is an important actor on the Brazilian organized left and one of the original founders of the Partido dos Trabalhadores (Workers Party/PT). For the last two decades he has been part of the national directorate of the Central de Movimentos Populares (People’s Movement Central/CMP), which agglomerates dozens of different social movements representing homeless, woman’s, Afro- Brazilian, LGBT and landless peasants populations. It currently has a membership of around 200,000 nationwide, making it Brazil’s 3rd largest popular social movement. For the last two years, the CMP has played a key role in the Frente Brasil Popular (Brazil Popular Front/FBP), a broad based coalition of student groups, social movements, academics, labor union federations and left political parties that fought against Dilma Rousseff’s illegal impeachment and currently fights against beleaguered president Michel Temer’s ultra-austerity reforms. In this short film, we visit Gegê in one of the abandoned government buildings occupied by the Movimento Moradia do Centro (Downtown Housing Movement), and he talks about the struggle for social housing in the city centers. As he meets with social movement activists and walks across a paralyzed downtown São Paulo the following morning, he talks about the coup and how it relates to poor and working class rights. His group joins with activists from the Movimento dos Trabalhadores Rurais Sem Terra (Landless Rural Workers Movement/MST) and Levante Popular Juventude (Youth Popular Uprising) social movements. They walk down a hill, pull dozens of tires from an improvised storage area and block off a major avenue during the morning rush hour. This was one of thousands of similar road closures that took place across Brazil, simultaneously, on the morning of April 28 as an estimated 35 million people participated in the general strike against the coup and its ultra-austerity reforms.

By Brian Mier, Research Associate of the Brazil Research Unit at the Council on Hemispheric Affairs