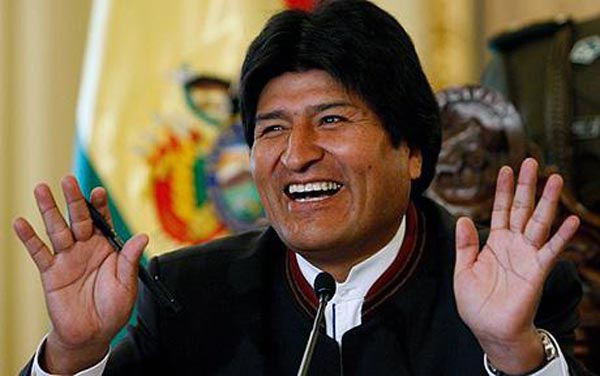 Throughout its fractious history, Bolivia has suffered from persistent social inequality and political instability, as well as an apparent inability to implement economic policies capable of securing long-term prosperity. Thus, it was on promises of social equality, economic parity, and sustainable growth that Evo Morales was swept into power in 2005 with a record tally of more than 50 percent of the vote. Morales touted “equality for the country’s historically marginalized and discriminated impoverished indigenous majority.”(1) However, he has largely failed to keep these promises, often finding it difficult to translate his charged rhetoric into viable policy and thus maintaining the status quo. Despite his original popularity, this reality could ultimately push him out of office in the 2014 elections, or even before, particularly if the current social unrest continues.

The Rise of Morales

Morales’ reputation of struggling to end poverty greatly influenced his rise to power and his popularity. After losing four siblings to poverty, his family moved to the Chapare, a rural region in the Department of Cochabamba.(2) Early in his political career, Morales became involved with campesinos and coca growers, forming connections that influenced his rise to the presidency of the coca-leaf growers union and, later, to a seat as congressional representative in the Bolivian parliament. While then-Congressman Morales was attending an inter-parliamentary conference in Geneva, Switzerland, in October 2003, a massive uprising of Bolivian campesinos ousted President Sánchez de Lozada from power. A series of social movements and popular protests followed, destabilizing the neoliberal government and forcing the premature presidential election of late 2005.(3)

During the presidential campaigns, the indigenous Bolivian population, which comprises 62 percent of the population, widely identified with Morales because of his indigenous descent.  They became his unconditional supporters and placed their hopes in him to change the country’s entrenched social divides in their favor.(4) Indeed, Morales’ victory in 2005 was a result of arguably one of the largest popular mobilizations of the indigenous observed in Latin America over the past decade.(5) Upon assuming the presidency, Morales appeared serious about answering his electoral mandate. He organized a national referendum to amend the nation’s Constitution, hoping to expand the indigenous population’s governmental representation as well as recover economic control of the country’s natural resources, such as natural gas, through a protracted nationalization process of foreign owned enterprises.

Even though Morales began his presidency with much vigor, once in office his administration did not necessarily yield the results coveted by his electorate. In Morales’ six years as president, he has targeted inequality in Bolivia but only to a limited extent. As his administration has been largely tied to charges of corruption, human rights violations, and censorship, critics of Morales argue that the issues of ethnic diversity and inequality have oftentimes consequently gone unaddressed.  Indigenous leader Fernando Vargas, for instance, has leveled the vocal accusation that Morales continues to effectively colonize the indigenous population of Bolivia by not considering their opinions on issues of critical importance to them.(6)

In defending himself against such claims, Morales points to the upcoming referendum he initiated regarding the construction of a highway that would destroy part of TIPNIS national park, as evidence of his commitment to the inclusion of the indigenous in the decision-making process. Thus far the affected indigenous populations have expressed strong opposition to the project, protesting its shortcomings with a one-month-long march to La Paz. As of June 20, two protest marches composed of TIPNIS indigenous community members had been mounted to ask the government to cease the highway project. During these marches, at least five individuals died, half of them children. Many more have been affected by disease, accidents, and have been subjected to bodily harm in repeated aggression by the police forces Morales administration ordered to stymie the march. Rather than listening to the indigenous pleas, Vargas claims that the government has given engines, solar panels, energy generators, and more, to the people of TIPNIS as “gifts,” in an effort to gain support for the upcoming referendum. For Vargas such attempts to co-opt indigenous populations are eerily familiar: “I thought that the colonization of 500 years had ended, but it has become apparent that the colonization in Bolivia continues with President Evo Morales.”(7)

In response to continued construction on the highway project and the governments’ deaf blind eye to indigenous protests, a group of the indigenous met with José Miguel Insulza, general secretary of the Organization of American States, over the weekend of June 1. The meeting’s purpose was to inform Insulza of the violation of human rights and freedom of speech committed by the Bolivian government.(8) There, the group asked Insulza to mediate with La Paz on the issue.

The Sandinista Nicaraguan daily, El Nuevo Diario, reported this year that the social groups that had carried Morales to power in 2006 are now turning their backs on him for failing to uphold his campaign promises.(9) For example, members of the Bolivian Labor Union (Central Obrera Boliviana) argue that the Morales administration continuously does not listen to their demands, something Morales promised not to do when he assumed the presidency.

As a result of Morales’ sometimes-rash decision-making, conflicts in the departments of Chuquisaca, Pando, Potosí, and Santa Cruz have resulted in the deaths of Bolivian citizens. Eight months after Morales became president, violence in the Potosí mining community in Huanuni led to the deaths of 16 people during a dispute over local mining privileges. Many ensured that the confrontation could have been prevented if Morales had stayed loyal to the pledges he had made to the cooperativistas who had been extremely influential during his election.(10)  Unfortunately for the masses of Bolivians who voted for Evo Morales, only few of them believe he has kept his electoral promises. As for the rest, they have noted how the government has spent time and resources on issues that have not solved their immediate problems, such as changing the national flag emblem. Due to Morales’ inability to formulate policies that reflect his progressive position, the opposition sees him as merely attacking them with the intention of getting vengeance for the oppression Morales and his people had suffered during the early years of his adult life.

For example, on May 28, for the first time in Bolivia’s democratic history, a senator sought asylum at the Brazilian embassy in La Paz. Senator Roger Pinto had claimed that he had no other option than to solicit asylum due to the “harassment and persecution [that he faced] from the government of Evo Morales.”(11) During Morales’ two terms in office, several other political foes have sought political asylum in the United States, Brazil, Paraguay, Peru and Spain due to alleged political prosecution.(12) Further depicting the extent to which the Morales administration has badgered the opposition, the Bolivian government refuses to procure the required documents that would allow Pinto to travel to Brazil. According to Pinto, the Foreign Minister of Bolivia David Choquehuanca once said in a meeting with ambassadors residing in the country, “If Brazil wants a thief and a corrupt man then it will take Roger Pinto, but he will stay until he rots in the [Brazilian] embassy.”(13)

Morales’ economic and social policies have been faulted for not adequately addressing the problems of ethnic inequality; instead, his supporters have seen the country’s divisive issues exacerbated.  Consequently, his administration has been accused of following a path that is not beneficial for its people. The next Bolivian election is scheduled for the end of 2014, giving Morales time to become the leader he once promised to be. While doing so will be easier said than done, the Morales administration would do well to heed four pieces of advice. First, more resources should be diverted to benefit the Bolivian public education and health systems.  La Paz must increase its transparency and consult with representative groups such as the Bolivian Labor Union before implementing labor and other social policies. Third, property rights must be protected in order to more efficiently attract foreign investment, a central part of any plan to elevate Bolivians out of poverty. However, such protections would not entail complete privatization, as Morales must dually guard the interests of local companies from external threats. Finally, human rights and civil liberties must be respected, and as is legally mandated, the indigenous population should constantly be kept in mind. While Morales will find these reforms difficult, by implementing at least some of them, he could finally fulfill his electoral promises and transform himself into a president who represents all Bolivians.