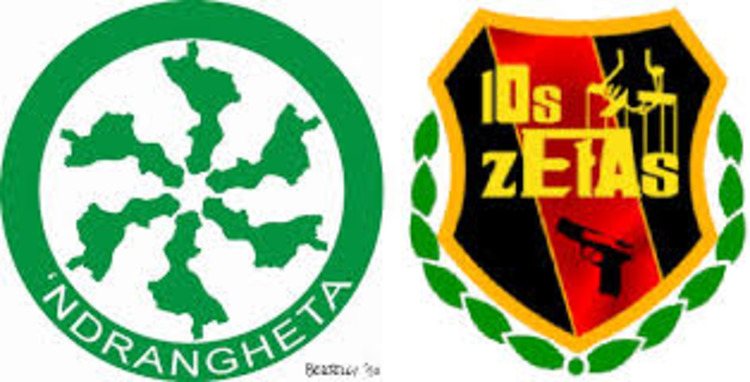 By: Sergio Corrado and Francesca Realacci, Research Associates at the Council on Hemispheric Affairs

1 of this series (“The Relationship between the Italian Mafia and Mexican Drug Cartels – Part 1: A Comparison,” published on COHA’s website on December 2, 2013), explored how powerful Mexican drug cartels, namely Los Zetas and the Gulf Cartel, have entered into a business relationship with several Italian criminal networks, including the ‘Ndrangheta, an organization that encompasses the Coluccio and Aquino families in New York and the Schirripa family in Calabria (a region in southern Italy). Italian prosecutor Nicola Grattieri has declared that these connections can largely be attributed to the Mexican cartels’ need for a new market and the Italian cartels’ quest for new drug providers and safer routes and warehouses for housing shipments. [1]

Though the U.S. still possesses the largest market for cocaine, Europe is rapidly catching up. In fact, demand for cocaine in the United States has decreased during the past few years, as illustrated by a decline of 68% in cocaine-positive urine tests in U.S. workplaces between 2006 and 2010. Conversely, the volume of cocaine consumed among cocaine users in the countries of the European Union and the European Free Trade Association (which includes the countries of Iceland, Liechtenstein, Norway and Switzerland) has doubled over the last decade and reached an estimated capitalization of 33 billion USD at retail level in 2009. This figure is not too distant from the comparable U.S. statistic, which was approximately 37 billion USD in 2009. [2]

Over the past few years ‘Ndrangheta has begun to look for new providers and updated supply tracks. Today, ‘Ndrangheta is perhaps the wealthiest criminal organization in Europe, with a net worth of almost 44 billion euros – it is worth noting that this trumps certain European countries, like Estonia and Slovenia, whose economies’ GDPs are measured at 13.2 and 30.4 billion euros respectively. The organization has planned to reduce the cost of supplying drugs, particularly from South America, by means of bypassing brokers and looking for vehicles for direct contact with cartels, especially those located in Colombia. [3] Due to this unique strategy, the ‘Ndrangheta has become a major actor in the international drug trafficking market.

Importantly, ‘Ndrangheta members are considered reliable business counterparts by other criminal organizations thanks to their access to vast financial resources. Furthermore, due to the fact that the ‘Ndrangheta cell is composed of tight knit family members, informants cooperating with the authorities coming from the ‘Ndrangheta families are very few and far between. In addition, and perhaps most importantly, their affiliates control the harbor of Gioia Tauro (located in Calabria, on the Tyrrhenian coast), which is one of the most economically critical ports in Europe. Beyond legal goods, traffickers bring high volumes of drugs through the area. Between March 2011 and June 2012, for instance, the Italian authorities seized 2,632.315 kg of pure cocaine coming through the harbor from South America. [4]

On September 17, 2008, the economic linkage between Los Zetas and the ‘Ndrangheta families of Coluccio and Aquino became public for the first time. The operation – called “Project Reckoning,” (also known as “Operation Solare”) – revealed that under the supervision of ‘Ndrangheta’s boss, Giuseppe Coluccio, the joint venture between ‘Ndrangheta and Los Zetas allowed for the transportation of mass amounts of cocaine to Europe, mainly through the port of Gioia Tauro. Specifically, the police seized more than 16,000 kg of cocaine, 1,039 pounds of methamphetamine, 19 pounds of heroin, 51,258 pounds of marijuana, 176 vehicles, and 167 weapons. DEA (U.S. Drug Enforcement Administration), FBI, and ICE (U.S. Immigration and Customs Enforcement) agents participated in the operation, which required 15 months of continued investigation. [5]

Carabinieri Captain Massimiliano D’Angelantonio emphasized that, thanks to this investigation, international police forces were able to discover that Giuseppe Coluccio was hidden in a lavish penthouse in Canada on the shore of Lake Ontario. Authorities arrested him on August 7, 2008. He had organized and was able to manage a wide drug trafficking network with the assistance of Giuseppe “Big Joe” Cutrera, his business partner in the food company “Mangiare”, located in Toronto. They organized a cartel trafficking cocaine and heroin from Latin American countries to Europe. The main dealer in this enterprise was Luis Calderón, who sent cocaine by air from the US to Italy to be sold by the Schirripa family on the Italian market. [6] Once this relationship was uncovered, the White House added the ‘Ndrangheta Organization to the list of “Narcotics Kingpin Organizations,” which tracks major crime organizations that pose a threat to U.S. security concerns. At the time, the ‘Ndrangheta was thought to be responsible for the shipment of about 80 tons of cocaine to Europe from South America via New York in cooperation with Gulf Cartel cells, namely the Los Zetas group (at that time working for the Gulf Cartel, but now an independent cartel) operating in the New York City metropolitan area. [8]

The relationship between Los Zetas and the ‘Ndrangheta is now in the process of changing the way in which Los Zetas do business as well as structure their organization. In fact, as Patrick Corcoran, from the renowned online security-news agency InSightCrime.org, has stated that they are shifting their operational model towards that of the ‘Ndrangheta. Corcoran emphasized that Zeta tactics, like extractions from the local population, extortion, and diversification of their products, could be attributed to the Italians. [9]

While only drug dealers were imprisoned as a result of Project Reckoning, bosses of ‘Ndrangheta and Mexican drug cartels were later implicated for crimes thanks to the Italian operation “Crimine 3” (“Crime 3”) also known as “Solare 2,” conducted in 2011.

In July 2011, Reggio Calabria’s (the biggest city in Southern Italy’s region of Calabria) judge for preliminary investigations led to the issuance of 45 arrest warrants carrying the charge of criminal conspiracy related to international drug trafficking. This has led to investigations that allowed Italian, Spanish, American, and Dutch police forces to seize 809,283 kilograms of cocaine. The operation highlights the existence of a consortium between the ‘Ndrangheta families (namely, the Jerinò, Aquino, Bruzzese, Comisso, Siderno, and Pesce families), which managed drugs arriving in Europe from Central and South America. [10]

A key figure in recent developments has been Giulio Schirripa’s uncle, Vincenzo Roccisano. Since Schirripa was imprisoned by international police forces in the Project Reckoning-Solare operation, Roccisano started to look for new alliances. Besides maintaining his nephew’s connections with some Los Zetas members that used to traffic cocaine in New York coming from Colombia and Venezuela, he met the brothers Luis Ernesto, Luis Leander, and Luis Mario Lara Alvarez (Spanish citizens from Colombia), the Venezuelan Edmundo Salazar, and the Surinamese Wierdjanandsing Gopal. [11] It was this group’s idea to use the Gioia Tauro harbor as a delivery center for drug shipments. The group later organized a shipment process that relied on the company Diamante Fruit, which imported bananas and other agricultural products from Ecuador into Europe. Drugs were smuggled in several ships and, upon their arrival at Gioia Tauro, the drugs were stored in warehouses owned by service companies which had ties with the aforementioned Pesce family. The system was successful in expanding drug shipments to Europe.

Italian Carabinieri forces led by Colonel Pasquale Angelosanto and ROS commander Giampaolo Ganzer discovered that in only a few months, a dozen cocaine shipments arrived at Gioia Tauro’s docks. For each load of cocaine transiting through the port, the Pesces kept – and continue to keep – a part for themselves. The Latin America-Gioia Tauro route was not the only one. Shipments also went to ports in the Netherlands and were then delivered to Italy and to other European countries by land. Furthermore, ‘Ndrangheta was not the only Italian Mafia in the business. Vincenzo Roccisano was in contact with Cosa Nostra, the Sicilian Mafia, through Giuseppe Spatola, a major Mafia member operating in Palermo. Roccisano let Cosa Nostra enter the business, and in doing so, he made sure that he had two different drug-buying mechanisms able to operate in Italy. Whenever ‘Ndrangheta could not assure financial coverage because of imprisonments or requisitions deployed by Italian police forces, the Sicilian Mafia would immediately be called into the drug trade from South America, facilitating the flow of money being sought after by Los Zetas. [12]

As confirmed by the attorney general of Reggio Calabria, Giuseppe Pignatone, the present relationship between Cosa Nostra and ‘Ndrangheta is reversed compared to that of twenty years ago. While in the Nineties the Sicilian Mafia was the hegemon in transatlantic heroin trafficking, today Calabria’s Mafia holds hegemony in cocaine trafficking, and Cosa Nostra only provides support and aid in distribution. [13]

A more recent investigation called “Operation Monterrey” was carried out by anti-drug police forces in Palermo and the DEA in June 2012. The operation exposed the entrepreneur brothers Bruno and Elio Gerardi, who organized an international drug trafficking network involving dealers from the Cosa Nostra as well as from the Camorra, both elements of the Italian Mafia. Additionally, Mexican drug traffickers from Monterrey aided in transporting hundreds of tons of cocaine from Monterrey to Palermo and from Monterrey to Dutch harbors. The cocaine was hidden inside industrial ovens, manufactured by the Gerardi brothers’ company. This operation confirms that Cosa Nostra now avoids exposing itself on the front line of international drug trafficking, in order to elude costly punishments. It prefers instead to only provide financial support to the drug trade. [14]

The latest news in the public domain on the relationship between Mexican drug cartels and Italian Mafia regards arrests of key narco-trafficking figures. On November 2, 2013, Italian law enforcement police officers captured Venezuelan fugitive Edmundo Josè Salazar Cermeno in Rome. He is alleged to be a key member in the drug trafficking network exposed by the operation Crimine 3-Solare 2. Salazar Cermeno is believed to be in charge of the logistic support for cocaine smuggling into Spain on behalf of the ‘Ndrangheta families Aquino and Coluccio. Cermeno transported the drug by means of corrupted Spanish policemen and also in containers by air. According to Italian prosecutor Nicola Gratteri, some of the planes in which they transported the drug were also able to land on water. [15]

Since November, further arrests have also been made. In February, 24 members of the Gambino and Bonanno crime families were arrested in New York and several Italian cities by the FBI and Italian police. Seven ‘Ndrangheta members were among those arrested, and authorities quickly established the Italy-Mexico connection in the individuals’ trafficking operations. [16] Thereafter, in April, a high-ranking member of ‘Ndrangheta, Nicola Pignatelli, who had been hiding in a resort town in the Dominican Republic since 2011 after fleeing Italy, was arrested. [17]

In today’s global economy, transnational criminal organizations take advantage of free trade and circulation agreements as well as the lack of well-coordinated and comprehensive multinational law enforcement systems. COHA has attempted to analyze the recent successes of the Mexican and Italian governments in their struggle to control the international drug trafficking network created by Mexican and Italian criminal organizations. Still, further success will only be possible after a coordinated prevention effort led by both Rome and Mexico City. Additionally, while joint operations between Italian drug enforcement agencies and the DEA have been highlighted, similar initiatives do not seem to exist between Mexican anti-drug police forces and their Italian counterparts. In fact, as Nicola Gratteri has pointed out, the law enforcement system in Mexico is heavily imbued with corruption. Reasons for this problematic and widespread development in Mexico could be the low wages of Mexican police officers or the influence of powerful businessmen and politicians who are secretly involved in the now thriving narco-business. [18]

In addition, as the same Italian prosecutor highlights, it is very difficult for Italian authorities to work with the present decentralized Mexican law enforcement system, where police officers are under the direction of each state’s governor. [19] As long as corruption and lack of cooperation is present in the relationship between Mexican and Italian law enforcement agencies, the criminal organizations from these two countries will likely be the big winners.

[18] Conference organized by the Italian Institute for International Political Studies, “Crimine transnazionale. La minaccia delle mafie globali.” May 15, 2013. A full video of the conference can be accessed here: http://www.ispionline.it/en/eventi/evento/crimine-transnazionale-la-minaccia-delle-mafie-globali