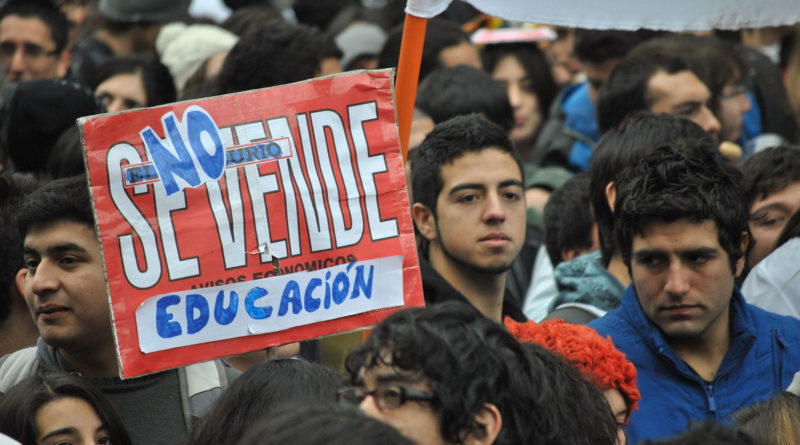 In Chile, as in the United States, the soaring cost of higher education has been a mobilizing force for the nation’s youth. Frustration among American students over rising tuition and debt boiled over in movements like Occupy Wall Street and Bernie Sander’s “Political Revolution.” Likewise, since 2006, Chilean students have regularly remonstrated aspects of their country’s mediocre, unequal, and highly privatized education system. In 2014, President Michelle Bachelet ran on the promise of comprehensive reform, including an ambitious proposal for free higher education. Despite initial progress, the government remains well short of meeting its commitment. While political opponents question the wisdom of Bachelet’s proposal, recent student demonstrations show that Chile’s youth intends to hold the administration to its promises.

Universal free higher education, while nice in theory, is expensive, regressive, and distortive in practice. Chile would do better to only cover university tuition for the less fortunate and then invest in high-quality public professional and technical institutions.

Similar to many components of Chilean society, such as its privatized pension program, the country’s modern education system has its roots in the 1973 coup that replaced socialist President Salvador Allende with conservative dictator Augusto Pinochet. Following the recommendations of U.S. trained economic advisors, Pinochet privatized large parts of the education landscape and municipalized public schools. As a result, low public spending, unequal access, and deregulation have come to plague the Chilean education system.

Until recently, Chile’s government invested relatively little in tertiary education. In 2008, public spending represented less than 20 percent of all higher education expenditures, the lowest among Organization for Economic Cooperation and Development (OECD) countries.[i] Without state subsidies, the median tuition at a public university in 2005 was $3,400 USD.[ii] Representing 22 percent of GDP per capita, Chile had the most expensive tuition relative to income of any developed nation.[iii]

Underfunding has also afflicted grade schools, resulting in a large private sector that caters to Chile’s middle and upper classes. Students from wealthy families rarely attend public schools, where low-income students are disproportionately enrolled.[iv] This disparity has had a substantial impact on participation in higher education. Graduates from private schools are much more likely to enroll in tertiary programs than those graduated from municipal schools.[v]

Finally, despite recent laws that forbid profits and seek to improve quality in higher education, many Chilean students attend for-profit, unaccredited institutions. The problem is particularly bad in the country’s burgeoning professional and technical education sector. With a landscape dotted by for-profit, under-performing institutions, the promise of free higher education becomes a balancing act between trying to help as many students as possible without supporting the worst centers of learning.

This second wave of protests had more success. In 2012, President Sebastian Piñera lowered the interest on government-sponsored student debt and increased the fiscal commitment to higher education.[viii] By 2015, the share of public spending on higher education had risen to 38 percent.[ix][x] Meanwhile, the median price of tuition at public universities rose slowly to $3,750 USD, now 18 percent of GDP per capita, comparable to that of the United States.[xi] [xii]

In 2014, Michelle Bachelet campaigned on broad education reform based on quality, inclusion, free education, and an end to profits.[xiii] Thus far, implementation has been piecemeal. In May of 2015, the Ley de Inclusión Escolar committed to phasing out family co-payments at state subsidized grade schools where about 50 percent of students attend.[xiv] This past March, the Ley de Carrera Docente raised both wages and requirements for the teaching profession.[xv] However, the lack of progress on higher education—Bachelet promised to eliminate tuition for 70 percent of students by 2018—has become a friction point between students and the government. This spring, protests in Santiago turned violent. In addition to free tuition, demonstrators demanded higher quality, a fair application process, a ban on for-profit institutions, and that the needs of Mapuche students be met.

Meanwhile, free university is already a reality for many of Chile’s poorest students. Through an amendment in last year’s budget, Bachelet ensured students from low-income families secured free tuition at select universities. The measure, costing an additional $252 million USD, benefitted around 160,000 students.[xvi] [xvii] Notably omitted, however, were the 44 percent of students who attend professional and technical institutions.

The Price of Free

Free higher education is a controversial policy. Political opposition, led by the center-right front, Chile Vamos, often focuses on the price tag. According to acciónEducar, extending free tuition to all one million higher education students would cost an additional $3 billion USD per year, a sizable increase in the Ministry of Education’s $14 billion USD dollar budget.[xviii] [xix]

A less common objection is that the policy is regressive; it helps wealthy students more than poor ones. In a 2013 op-ed in the center-left paper, La Tercera, Andrés Hernando, a think tank director, claims that the bottom 10 percent of students would receive just five percent of the policy’s benefits while the top 20 percent would rake in more than 30 percent.[xx] Matthew Chingos of Brookings Institute employed a similar argument comparing Bernie Sanders and Hillary Clinton’s plans. Under Sanders’ universally free proposal, the wealthiest 10 percent of students would receive disproportionally more funding because they attend more expensive institutions.[xxi]

A third complaint is that free higher education distorts economic incentives. Given the social benefit of an educated society and the difficultly in borrowing money solely against future income, some government subsidization of higher education is reasonable.[xxii] But eliminating price altogether can be a dangerous move. When costs cease to exist, universities will no longer compete on price and some students will choose degree programs that are more expensive to provide than their eventual return.

It is important to recognize that there are other options than universally free higher education. The present situation—free university for poorer students at certified schools—is a good start. But instead of shooting for 100 percent tuition-free, funding could be directed towards other priorities. Hernando suggests investing in pre-school and primary education to fight the achievement gap before it appears. Chingos proposes helping poorer students cover non-tuition expenses. But perhaps the best investment would be to expand quality and access in Chile’s professional and technical education sector.

In the past 10 years, IPs and CFTs have seen remarkable growth. Professional Institutes alone tripled their enrollment in the last decade and 2015 was the first year in which they awarded more degrees than traditional universities.[xxiii][xxiv] Like U.S. community colleges, these institutions’ programs are shorter and less expensive than those of universities. Moreover, they disproportionately cater to poorer students.[xxv] However, unaccredited providers and scams pervade the industry. Students are lured in by promotions such as a free iPad only to receive a cut-rate education. Experts in the field call for a network of high-quality public technical and professional institutions.[xxvi] This past March, the government passed a law creating 15 public CFTs.[xxvii]

Expanding access to public technical and professional schools would address many of the objections to universally free higher education. Consider first the price tag. In the United States, President Obama’s free community college proposal would cost $60 billion over 10 years compared to Hillary Clinton’s $500 billion universal plan.[xxviii] [xxix] Second, such a policy would be less regressive. In Chingo’s analysis, the benefits of free community college in the United States would fall evenly across all students.[xxx] There is no reason to expect this not to be the case in Chile. Last, subsidizing technical and professional education would be less distortive. There is already a documented shortage of technically trained workers in the Chilean economy.[xxxi]

While both Bachelet and CONFECH are right to demand greater access and lower costs in higher education, the complete elimination of tuition is not financially or politically practical.

There is evidence that the Bachelet Administration already recognizes this reality. For 2017, the only planned expansion in free higher education is directed at lower income students attending accredited, non-profit CFTs and IPs, a little more than a quarter of all such institutions. The budget also includes funding to create the first five public CFTs. While these modest policies may disappoint current protestors, they further expand higher education for Chile’s least fortunate students and create competition for private, for-profit providers. They represent a reasonable compromise addressing credible concerns over cost, the distribution of benefits, and potential market distortions.