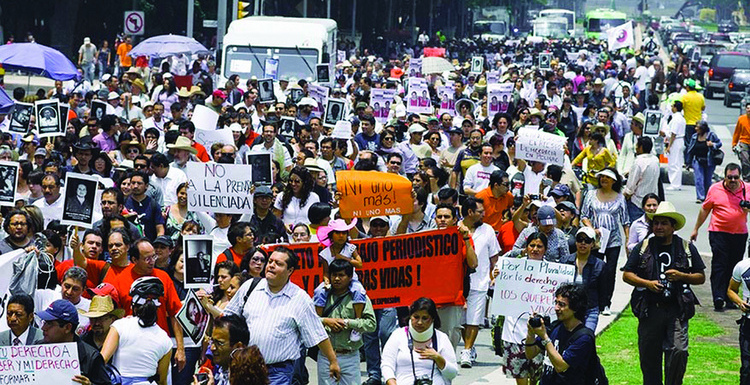 By: Fei Huang, Research Associate at the Council On Hemispheric Affairs.

As the spiral of violence engulfing 43 missing students in Mexico continues to draw international attention to the violence-ridden country, it is equally important to take notice of the recent murder of an innocent journalist who was caught up in Mexico’s drug wars. The tensions between citizen journalists and the Mexican drug cartels who had tried to silence them for years ended in an escalation of violence followed by a silence of justice. This could have ominous implications for the future of the Internet as a vehicle for citizen journalism. The intertwined relations between the government, the press (especially for burgeoning citizen journalists), and the drug cartels demonstrate how fragmented the public sphere currently is in Mexico.

To Report or Not To Report

A lifeless woman’s body lying on the dirty floor with a coup de grace bullet wound splattering her face, this is the last picture posted by the Twitter account @Miut3. The owner of the account, María del Rosario Fuentes Rubio, best known as “Felina”, was kidnapped by armed men on October 15 this year in the Mexican state of Tamaulipas. The next day, the cartel posted her dead body on Twitter.

Felina who had become a target of Mexico’s druglords when she reported on cartel violence via Twitter. She also worked as an administrator of Courage for Tamaulipas (Valor por Tamaulipas), a very popular citizen news site. She boldly worked on covering the local violence despite the threats she had frequently received on Twitter since early October.[1]

Sadly, threats and violence towards journalists and netizens (people who actively engage in online speech) are nothing new. Last year, international outrage erupted when the graphic video of a masked man, allegedly a hitman for the Zetas Cartel, beheading a woman was uploaded to Facebook.[2] Prior to that, according to Reporters Without Borders (RSF, Reporters Sans Frontière), four netizens were murdered in Tamaulipas in 2011 due to their reports on drug trafficking operations.[3]

In other words, Felina was not the only person who chose to undertake such a risky but just cause, which has been highly recognized by the Index on Censorship Chief Executive Jodie Ginsberg. “Her murder is yet another blow to the right to information and to the freedom of expression, and highlights the risks faced by individuals in the country who are striving to expose wrongdoings,” Jodie also stated that the impunity for the killers of journalists and digital activists poses a serious threat to the future online freedom of expression. She also blamed the authorities and the State for their inability or lack of will to punish the criminal and protect the rights of the online heros who have fallen victim, such as Felina.[4]

A glimpse of the extreme misfortune that e-journalists have suffered is a reminder regarding how vulnerable and fragile citizen journalists today are in Mexico. The government there is unwilling or unable to protect its citizens from the threats posed by the criminals, making the situation even more perilous and more dangerous for the e-journalists. These citizen journalists and bloggers are fear-mongering targets today.[5] Because of this danger, bloggers, journalists and citizens will have to think even more than twice before uttering the truth about drug trafficking activities. A photo of Felina’s corpse that has been uploaded to Twitter can be a powerful deterrent to other digital activists from continuing their work.

Before 2000, internet usage in Mexico was not particularly extensive, but ten years later, more than 33 million people—one third of the population—have their own Facebook accounts.[6] The rise of social media has filled the void left by the traditional media, which on most occasions are reluctant to publish information on drug trafficking. Besides Facebook and Twitter, popular blogs such as Blog del Narco, Nuestra Aparente Rendicion, and Borderland Beat all make it possible for masses to let their voice be heard regarding the ongoing violence.

Delving deeper into the media ecosystem could make it easier to understand why journalists from the conventional media are reluctant to get involved in drug-related reporting. Article of 7 of Mexico’s 1917 constitution forbids prior censorship, and clearly points out that “freedom of writing and publishing writings on any subject is inviolable.”[7] An amendment to Article 6 adopted in 1977 stated, “the right of information will be guaranteed by the state.” [8]Despite these laws, media in Mexico have to obey the ever-influential government and the consortiums, well known for their elevated levels of corruption, which is illustrated by the Mexico’s poor ranking in the 2014 World Press Freedom Index, which ranks number 152 among 180 Countries in the world.[9] The Mexican government is accused of constantly offering bribes to individual journalists for favorable coverage or to withhold certain information from the media.[10] Mexico’s 2012 presidential campaign is a good illustration of the collusion between the candidate Enrique Peña Nieto (the candidate of the historical and omnipotent PRI party) and the mainstream media such as Televisa, leading to mass protests and the creation of “YoSoy 132” student movement that criticized the unfair information system.

According to Reporters Without Borders, from 2000 to early 2012, more than 80 journalists were killed in Mexico, primarily by the drug cartels in retaliation for the their revelation of drug trafficking.[11] The reprisals taken by the drug cartels like the Sinaloa cartels are so vicious that many newspapers have become afraid of exasperating the cartels with penetrating coverage, resulting in a drastic decline of reportage on drug trafficking and other cartel operations.[12]

Rather than siding with media outlets, the Mexican government, stating that mass media are sometimes the source of spreading rumors that cause “a disturbance of the public order,” and chose to enforce restrictions on narco coverage and narco information, step by step. Former President Calderón (2006-2012) has attributed the widespread of narcoterrorism to the “national press”, explaining that cartels coverage on the newspaper front page was free propaganda for the drug cartels. In 2011, a cohort of more than 60 media groups reached the an accord, agreeing not to cover message that might obstruct the government’s operations to fight the cartels and will cut down on the reporting on narco-related incidents, such as the photographs of decapitated victims, which the government considered as being “propagandistic.”[13] Currently the Mexican government led by President Enrique Peña Nieto, has adopted the “New Narrative on Security Issues.” This initiative is aimed at reducing violent images in the media, and emphasizing the effective involvement carried out by the government in the drug war. It underscores that the killings and casualties are all necessary consequences of the “legitimate use of force by the authorities”.[14]As a result of this move, Blog del Narco, for instance, which enjoys an overwhelming popularity among the netizens seeking information on drug violence, has ended in limited public access because the government requested Google to limit accessibility its site and archives.[15]

Although the emergence of blogging and social networks makes it harder for state governors to impose restriction on free expression, the netizens, or citizen journalists, however, are still in a dire situation. To some extent, both the government and cartels are to blame for posing a similar threat to the freedom of speech.

The Mexican Government VS. Drug Cartels

A major Mexico City newspaper, La Jornada, once commented that “due to the decay of social justice and security institutions, the old connections between police and kidnappers, and the infiltration of drug trafficking in the spheres of politics, business, and the media, the borders of the formal authorities and criminal organizations are blurred.”[16] The threat that journalists face from the cartels and the government are therefore often intertwined. When asked about which of the two is more frightening, the fugitive journalist from Blog del Narc, author of Dying for the Truth, said that it was the government, because the threats are from “high up”.[17] According to Diaz, nearly 50% of all recorded acts of violence against reporters were conducted by the government security forces, the police, or government officials.

On the other hand, while actively imposing restrictions on the conventional media and the digital activists, the Mexican government seems unmoved to the harsh activities of the cartels. A pouty expression, holding an AK-47 beside the window of a fancy sports car, is supposed to be a typical selfie picture of a 20-year-old cartel member. The growing number of young people involved in the drug cartels explains logically this way of bragging about their life on social media. [18]

These selfies posted by the cartels are much more than merely showing off, however. The drug cartels are extremely adept at self-promotion through social media. By strategically utilizing cyberspace, the cartels keep people informed of their status and achievements, and even intimidate the public and the authorities. The posts are particularly tempting for the young people, who are on the threshold of a new career, or the unemployed, urgently on the look for jobs that might come with overnight wealth. Additionally, there are expert analysts working for the cartels, keeping track of Mexican public opinion.[19] Some cartels are using social media to commit victual kidnappings.[20]

The threat posed by the cartels who are protected by the government’s continued inaction, and the authoritative repression on common population, jointly lead to the hazardous situation that the citizen journalists are currently in.

Where To Go From Here

In the era of new media, the drug cartels are relentlessly self-advertising while citizen journalists are fighting to keep the Mexican population—as well as the rest of the world—aware of the country’s criminal activities. In the supposed-to-be free platform of information, however, the voice of the justice is stifled, either by the threats posed by criminals, or by the government’s misguided and repressive measures.

The appropriation of the public sphere by the citizen journalists can be a positive asset in the battle against drug cartels in Mexico, as well as against corrupt politicians. The Mexican government must protect the freedom of speech and the personal security of journalists, to preserve the public sphere constructed by the painstaking efforts of the common population. Justice cannot be upheld if the criminal acts are veiled and the avenues of speech are blocked.