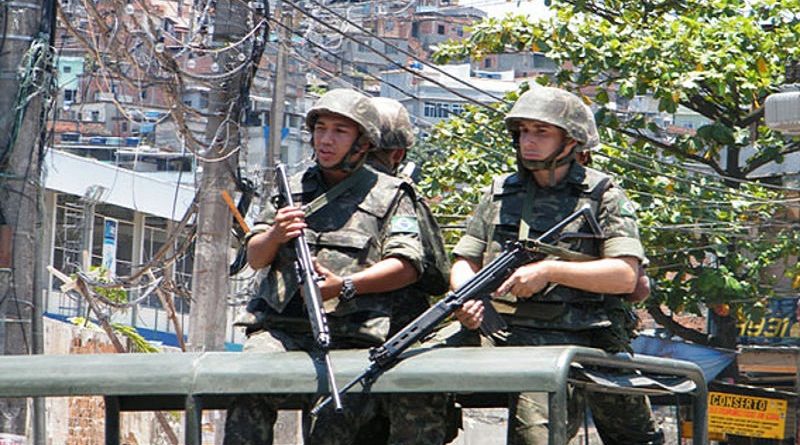 By José de Arimatéia da Cruz, Research Associate of the Brazil Research Unit at the Council on Hemispheric Affairs

To downlad a PDF of this article, click here.

Rio de Janeiro is known worldwide for its beautiful beaches and Copacabana’s sidewalks. However, lately much of what is reported on the international media regarding Rio de Janeiro concerns the increasing violence in the city, especially following the 2016 Rio Olympics and illegal rise to power of Michel Temer.[i] While violence is nothing new to a city of Rio’s status, what is new is the connections between localized gangs and international transnational organized crime[ii]. With the advancement of globalization and introduction of neoliberalist economic policies as the “panacea” to Brazil’s socioeconomic problems, criminal organizations in Brazil are in more direct contact with criminal organizations from abroad, thus increasing drug trafficking across Brazil’s board, which has created a sub rosa economy.

Addressing the current violence in Rio de Janeiro is long overdue given its nefarious effects to societal values and the population at large. In addition to undermining the social fabric of society, transnational organized crime organizations also present a triple threat to a nation-state’s political, economic, and social systems worldwide. Transnational criminal organizations (TCOs) and organized criminal organizations have the potential to undermine not only civil society but also political systems and state sovereignty by normalizing violence, legitimizing corruption, distorting market mechanisms through the disruption of pre-existing equitable commercial transactions, and degrading the environment by sidelining environmental regulation and standards.”[iii]

Given Brazil’s geopolitical strategic location within the Western hemisphere, the country has become “a dispatch point for drugs headed to Europe and Africa,” as well as a recipient for its own internal distributing.[v]  In Brazil, there are approximately 30 gangs dominating various prisons throughout the country. However, three make their presence known on a broader scale in terms of visibility, numbers, and firepower.  Brazil’s big three have established criminal networks not only in Brazil, especially in the States of São Paulo and Rio de Janeiro, but they are also active in the Tri-Border region and several other countries in South America.

One of Rio’s notorious gangs is the Primeiro Comando da Capital (First Capital Command, PCC). The PCC is believed to be Brazil’s largest and most organized criminal organization. The PCC has members in two-thirds of Brazil’s federal states and controls trafficking routes between Brazil, Bolivia, and Paraguay.[vi]  The accumulated wealth of the PCC is astonishing. The PCC earns US$55 million per year, made up of a monthly income of US$3.5 million from drug trafficking and US$1 million from members’ contributions. According to Ignacio Cano, researcher at the Violence Analysis Center at Rio de Janeiro State University, “they [PCC] are by far the strongest criminal group in Brazil.”[vii]

Due to the drug trafficking and conflict between criminal factions in Rio de Janeiro, the city is developing a reputation as the state in the Union where more police officers are killed than any other state. Obviously, this violence is not unidirectional. According to the newsweekly magazine Epoca, Rio’s military police kill about 74 persons per month on average.[viii] Roughly 77% of those killed by Rio’s notorious police are Afro-Brazilian or pardos (mulattos).[ix]

While no country in the world can completely eliminate crime or violence, there are steps that the Brazilian government can take to address the elevated level of violence in Rio de Janeiro.[x] First, prevent the excessive use of pretrial detention. If an individual is arrested, he or she should be brought before a judge without delay so that individual will not be jailed for months, sometimes years, in the presence of violent criminals and without formal charges being brought against them. Second, Brazil should decriminalize the use of marijuana. The state of Colorado, in the United States, could become a testing laboratory for Brazil’s government officials. Fortune magazine reports that Colorado’s marijuana business has generated US$ 996.2 million in legal sales of medical and recreational pot in 2015 while in 2014 the state’s legal pot vendors sold roughly US$699 million of the drug.[xi] According to Acebes, more than a quarter of convicted detainees are in prison for nonviolent drug charges.[xii] Finally, the Brazilian government should create social programs to educate and professionalize young man and woman who are incarcerated so when they leave prison they can be productive members of society. Again, according to Acebes, “the system’s goal, according to Brazilian law, is to give children in conflict with the law a chance at rehabilitation through education and other programs. In practice, many of its facilities differ little from adult prisons.” According to Acebes, in his last visit to units in the state of Ceará’s penitentiary system he saw where children were locked up in damp, dark cells 24 hours a day, without any educational or recreational activities whatsoever.[xiii]

Another important step is to overcome the country’s deep social inequality. According to Edmund Amann and Werner Baer, Brazil’s neoliberal regime did not improve income inequality, a problem which has haunted the country for decades. In fact, the gap between the richest 10 percent of income groups and the poorest 40 percent of income groups has continued to increase with the introduction of neoliberal policies. This widening gap is due in part to the reduction of employment opportunities in the industrial sector that occurred as a result of policies that favored privatization, technological advances, and, consequently, mass layoffs.[xiv] Under the Lula administration, according to Instituto de Pesquisa Econômica Aplicada (IPEA),  extreme poverty in Brazil decreased from 12% in 2003 to 4.8% in 2008.[xv] According to Aaron Ansell, this decreased in poverty was a directly consequence of Lula’s administration efforts to combat poverty by introducing a social programs, aid to small farmers, and labor and pension reforms.[xvi]

Rio de Janeiro, Cidade Maravilhosa (the Marvelous City). A city recognized worldwide as one of the wonders of the world. A city that has inspired Brazil’s greatest composers to memorialize its beauty through songs, and yet a city that lately is in the news not for its beauty, charm, and elegance, but rather its violence.

By José de Arimatéia da Cruz, Research Fellow of the Brazil Research Unit at the Council on Hemispheric Affairs

[i] “Amnesty International warns of rising violence in Rio de Janeiro,” available at http://www.reuters.com/article/us-brazil-violence-rio-idUSKBN1802K8. Accessed May 23, 2017

[vii] “Brazil’s biggest drug cartel promises a ‘World Cup of terror’ as violent demonstrations take over the streets,” available at http://www.dailymail.co.uk/news/article-2462638/Brazils-biggest-drug-cartel-promises-World-Cup-terror.html. Access May 9, 2017

[x] The following recommendations are based on Cesar Munoz Acebes, a Brazilian Senior Researcher at Human Rights Watch and based on his essay entitled “Brazil’s Correctional Houses of Horror,” published by Foreign Affairs, Wednesday, January 18th, 2017.