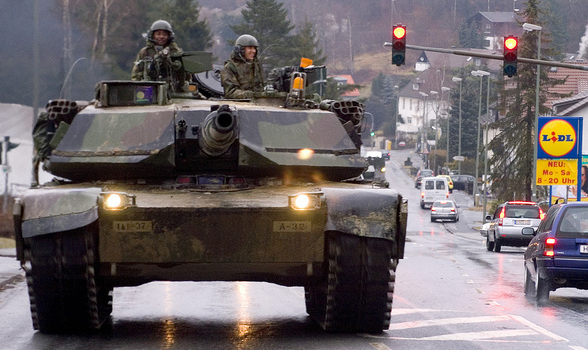 The ambiguity between the role of military forces and the police is a growing concern in Central America’s Northern Triangle countries, El Salvador, Guatemala, and Honduras. In all three countries, underpaid, outmanned, outgunned, and ill-trained police forces are forced to solicit assistance from the military.  Most international attention on these matters revolves around social pathologies, such as drug violence, gang rivalries, and overcrowded prisons. While all of these issues remain major problems in the countries, the militarization of the police force is a larger, almost uncontainable, domestic issue that threatens citizens’ safety. As it stands, the Northern Triangle situation is the most severe challenge to the leadership of these nations.  Despite past experiences, U.S. foreign policy in Latin America supports military assistance for police forces, and contributes to the current ambiguity.

Military, Police, and the U.S. Experience

Police and military forces are both security-oriented agencies, but there are fundamental differences between them.  Not only do these agencies characteristically train and operate differently, but they also serve entirely different security functions. In the U.S., for example, the armed forces are global branches of the federal government, while police agencies are broken up into municipal, county, state, and federal levels.  Each police department operates differently and is tailored to the needs of their respective jurisdictions. Simply put, the armed forces have one defined mission, while each police department operating in the United States has its own variation of the “protect and serve” credo.

The differing mission statements for each type of distinct security force underscores how their efforts in practice actually are fundamentally different.  The U.S. Marines’ website states that, “Every Marine is a rifleman, trained first as a disciplined warrior regardless of military occupational specialty.”[1]  On the other hand, the goal of a small police force, such as the Lawrence Police Department in Kansas, is “to provide the citizens of Lawrence with the most community focused, efficient and effective police service available within the confines of existing resources.”[2]  These are examples of two different security forces, one that approaches a situation with a target, and the other, with the intention to help find peaceful solutions.

Despite the U.S. law that limits military intervention only for extreme circumstances, Washington has learned that domestic military deployment only makes matters worse in calming internal conflicts.[3] For example, shortly after the United States invaded Cambodia, the National Guard was called to Kent State University in an effort to subdue anti-war protests.  For unknown reasons, National Guard troops incorrectly assumed that the governor had declared a state of emergency.  Fearing for their lives during the protests, soldiers shot into the crowd, killing four students.  Ultimately this led to countless lawsuits and an undisclosed out-of-court settlement for the complainants. Despite countless deviations from the plan, no soldiers were found guilty of any wrongdoing.[4]

There have been a number of other dispatches of domestic military forces that have resulted in similar outcomes. Los Angeles’ riots in the 1980s, labor strikes in 1930s, and the killing of a cattle farmer in Redford, Texas in the late 1990s are just a few.[5] The United States has been made aware of the different discrepancies in operating strategies that may exist at any one time between military and police forces, and that if the military is used in the incorrect setting, the events can prove disastrous.  Military members instinctively learn to protect themselves and their team members, while police officers are trained to quell tensions and protect citizens.

Given that the U.S. has, for the most part, compartmentalized military and police functionality, one would expect it to attempt to institutionalize similar operations within countries experiencing internal conflicts. However, after Washington came to the realization that drug cartels were moving into the Northern Triangle, it established the Central American Regional Security Initiative (CARSI) in 2008 to provide assistance to fight the growing problems of violence, corruption, and institutional weaknesses found throughout the region.  The initiative supplies “equipment, training, and technical assistance to support immediate law enforcement and interdiction operations,” primarily within the Northern Triangle countries, and is funded by the U.S. State Department.[6]  The problem is that since these countries use their military to help maintain internal security, the U.S. assistance is being funneled to the military instead of the police.

There are already examples of military forces taking over police functions abroad, according to a Congressional Service Research Report:

In Guatemala, military officials maintain that fewer than 10% of the country’s 9,000 soldiers perform traditional military functions. In El Salvador, some 8,000 troops are involved in border security efforts, joint patrols with police in high-crime areas, and prison security. Salvadoran President Mauricio Funes has recently appointed his former defense minister, a retired general, to head the ministry that oversees the national police. On December 5, 2011, the Honduran government declared a 90-day public security emergency, during which time the military was allowed to carry out police functions.[7]

Despite the fact that these military troops are assisting police forces, the U.S. State Department continues to increase its CARSI funding and support the aforementioned actions.  From 2010 through the requested 2013 budget, CARSI increased funding from $95 million USD to $107 million USD.  Furthermore, the U.S. State Department has continued to increase foreign military financing (FMF) in all three countries since 2011 and it will continue to do so, according to the proposed budget, through 2013.[8] In other words, completely contradictory to its domestic policies, the U.S. is encouraging Northern Triangle governments to continue to use military personnel to assist police forces, either through foreign military financing and CARSI funding or the use U.S. military personnel to conduct police training.

A Population Caught in the Middle

The Northern Triangle government officials do not seem to mind added financial assistance.  Their militaries are better equipped, their technologies are more developed and they have access to significant new resources. Unfortunately, their populations are suffering, as they seem to be the target of not only criminal organizations, but the police and military as well.  At a recent “Just the Facts” conference covering a wide range of Latin American security concerns, organizers continuously debated respective police and military roles. Helen Mack, President of the Myrna Mack Foundation, stated that Guatemalan citizens simply do not trust the police or the military, as they feel “like a target” when these security forces are present.[9]  In theory, as violence reaches new levels, citizens should feel relieved by the police presence, not threatened.  Furthermore, an incident in Honduras on May 26 demonstrates why these fears exist. 15-year old boy Ebed Haziel Yánez Cácere left his home on a motorcycle and traveled through Tegucigalpa, Honduras.  The military signaled him to pull over, but when he refused, they shot and killed him.[10] Whether he refused to pull over out of fear, lack of trust, or simple negligence is unclear.  However, it is clear that the Cácere case is simply one example of the dangers that can arise when military forces are used to assist police.

Dr. Frank Mora, Deputy Assistant Secretary of Defense for Western Hemisphere Affairs, acknowledged such concerns in a similar presentation given at the conference.  However, he indicated that while the situation in Guatemala, along with other Central American nations has not been ideal, it is what these governments have requested. His remarks reinforced the notion that countries should not ask for U.S. assistance and then criticize its appropriation when it is eventually given.[11]  While this statement deserves some thought, it ignores why the U.S. continues to support strategies that have not worked domestically, as evidenced by the aforementioned examples. Along with Dr. Mora, Christopher Ashe of the State Department stressed the importance of a collaborative relationship between the U.S. and governments of the Northern Triangle.  He emphasized that this was not a ploy for the U.S. to reaffirm its hegemonic position in the Western Hemisphere, but a relationship built on trust and cooperation.[12]  However, it seems that the well-intentioned policies of trust and collaboration are actually supporting Northern Triangle government agencies and ignoring the welfare of its citizens.

In 2010, the respective homicide rates of Honduras, El Salvador, and Guatemala were 82.1, 66.0, and 42.1 per one hundred thousand people.[13] These statistics are among the highest in Central America, a region already plagued with high homicide rates.  According to a survey that asked the population if they were the victims of a crime in the last twelve months, 24.2, 23.3, and 14 percent of El Salvadoran, Guatemalan, and Honduran populations respectively indicated that they were. These figures are also among the highest in Central America.[14] While these statistics are concrete, attempts to understand the feeling of security, or lack there of, among Northern Triangle populations is difficult to quantitatively explain.  Nevertheless, testimonials from individuals such as Helen Mack can begin to address the scope of the problem.

Washington’s stated intentions are based on collaboration and mutual interests, and Northern Triangle governments certainly do not reject the incoming financial assistance.  However, the populations of these countries seem to be caught up in the middle between criminal organizations and the security forces that should be protecting them. What remains clear is that Northern Triangle governments need to show a more defined appropriation strategy to institutionalize the rule of law if they are going to effectively address present and future security issues.

While Washington is not entirely culpable, it is imperative that the White House recognizes its previous role in blurring the roles between Latin America’s police and military roles in at least the following two ways.  First, Washington should not, for any reason, support policies that are themselves domestically illegal or contradictory given past experiences. [15] This does not mean Washington should cease aid or completely reshape its security infrastructure.  Instead, U.S. administrators should reallocate funding to where it best institutionalizes professionalization within police forces located in the Northern Triangle.  Until the current culture of ambiguity between domestic and foreign security policies is addressed, U.S. policies in the Northern Triangle will not be sustainable.

Second, Washington should consider sending U.S. police forces to train foreign police departments in an effort to enhance professionalization and implement the “protect and serve” mentality. Washington could either contract retired officers or officers within high crime rate jurisdictions so that their police skills would be transferrable.  While this may seem like a far-fetched, even idealistic, notion, the current frameworks available to export such services already exist. Understandably, both approaches would be difficult to implement because the situation in the Northern Triangle requires specificity and tailored policies, something that the United States’ “one size fits all” approach has never fully materialized.  However, until police and military forces are compartmentalized, visible problems like Central Americans’ populations’ insecurity will continue to amplify unless the forces that protect them understand their mission.

[2] City of Lawrence, Kansas, Goals and Objectives of the Lawrence Police Department, http://police.lawrenceks.org/content/goals-and-objectives-lawrence-police-department.

[4] George Withers, Lucila Santos, and Adam Isacson, “Preach What You Practice: The Separation of Military and Police Roles in the Americas,” Washington Office on Latin America, 2010.