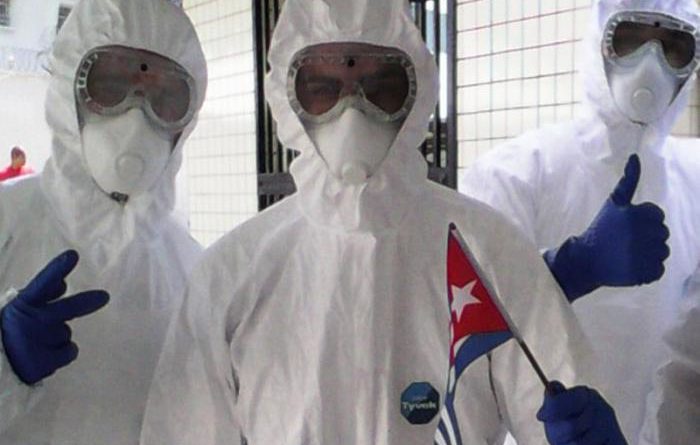 COHA supports this campaign to award the Nobel Prize to the Cuban Henry Reeve Brigade, due to its valuable contribution to the well-being and healthcare of millions of people. We publish this statement prepared by the International Committee for Peace, Justice and Dignity.

By The International Committee for Peace, Justice and Dignity

The International Committee for Peace, Justice and Dignity calls on the friends of Cuba and advocates of mutual assistance among nations to support the nomination of the “Henry Reeve International Medical Brigade Specialized in Disaster Situations and Serious Epidemics” for the Nobel Peace Prize for its significant contribution to humanity in the face of the pandemic caused by the Covid-19 coronavirus.

More than 1,500 Cuban health professionals, doctors, specialists and nurses were requested by 23 countries in Europe, Africa, the United Arab Emirates, Latin America and the Caribbean to help them in this global crisis and are now working in those countries.

Other requests for cooperation are underway, constituting the only international medical contingent to provide a scientific and humanitarian response to the pandemic on a global scale.

The medical cooperation that took place in Pakistan and Haiti after the devastating earthquakes, and the extraordinary success in the face of major epidemics such as Ebola in Africa demonstrates their outstanding medical-scientific training, the capacity and experience to save lives in situations of natural disasters and serious epidemics, and underscores their great values of altruism, solidarity and humanism. “The Henry Reeve Brigade has spread a message of hope throughout the world. Its 7,400 volunteer health professionals have treated more than 3.5 million people in 21 countries in the face of the worst disasters and epidemics of the last decade,” said the World Health Organization when it presented the Dr Lee Jong-wook Public Health Award at a ceremony for them in Geneva in May 2017 during the 70th World Health Assembly.

The initiative to nominate the Henry Reeve Brigade for the Nobel Peace Prize, that has appeared in social networks since March, has taken shape in groups of friendship and solidarity with Cuba such as the Association Cuba Linda, the Association France-Cuba and Cuba Cooperation of France; the Circle of Granma in Italy; the page created in the social network Facebook, on behalf of the Greek solidarity groups by the outstanding friend of Cuba Velisarios Kossivakis, under the name “Nobel Prize for the Doctors of Cuba”, which has more than 13 thousand endorsers in Greece and tens of thousands of messages and interactions; the International Committee for Peace, Justice and Dignity of Brazil; Cubanismo of Belgium; the Movement of Solidarity and Mutual Friendship Venezuela-Cuba; Australia-Cuba Friendship Society, ACFS WA branch; the Association of Latin American Arab Solidarity José Martí of Lebanon; and Madres Sabias of Spain.

They are joined by solidarity groups in the US, such as the Network in Defense of Humanity – US Chapter; the National Network on Cuba (NNOC); IFCO/ Pastors for Peace; Code Pink and the US Chapter of the International Committee for Peace, Justice and Dignity.

We ask the community to strengthen the bonds between all of us to work in unity of action and achieve the nomination of the Cuban International Medical Brigade “Henry Reeve” for the Nobel Peace Prize.

While the US intensifies the blockade, it prevents Cuba from even acquiring the health supplies required to face the pandemic and puts pressure on other countries by launching a campaign of lies and slander against Cuban doctors.

The rhetoric of hatred, expressed by US President Donald Trump, Mike Pompeo and servile OAS Secretary Luis Almagro, seems to have no end. Recently an additional two million dollars has been allocated to the USAID to attack Cuban medical collaboration. “Instead of wasting money on aggressions against international cooperation and the health of the people, the U.S. government should focus on preventing the illness and death of its citizens in the face of Covid-19,” Cuban Foreign Minister Bruno Rodríguez said on Twitter.

In August 2019, to serve this same purpose, USAID, which provides resources to subversive programs against the Cuban government, allocated three million dollars. In less than a year, they have directed at least $5 million taken from the pockets of American taxpayers to destabilize a program aimed exclusively at  providing health care to those who need it most, during this current pandemic, especially the countries of the Third World.

The small and besieged Cuba continues its heroic resistance, leaving no one behind, preserving its social conquests, its sovereignty and independence. Faithful to its principles of internationalism and cooperation, as recently expressed before the NAM summit by Cuban President Miguel Díaz Canel.

Cuba and its doctors are giving the greatest example of giving solidarity and love to the world.

To support this campaign with your signature, click here.

The International Committee for Peace, Justice and Dignity is a network of concerned individuals from several countries of Europe, Latin America and North America who are dedicated to help defend the sovereignty of developing nations. Formerly named “International Committee for the Freedom of the Cuban 5”. Its main objective is to raise awareness among the people of the United States regarding the effects of the US blockade against the Cuban people. More information here.