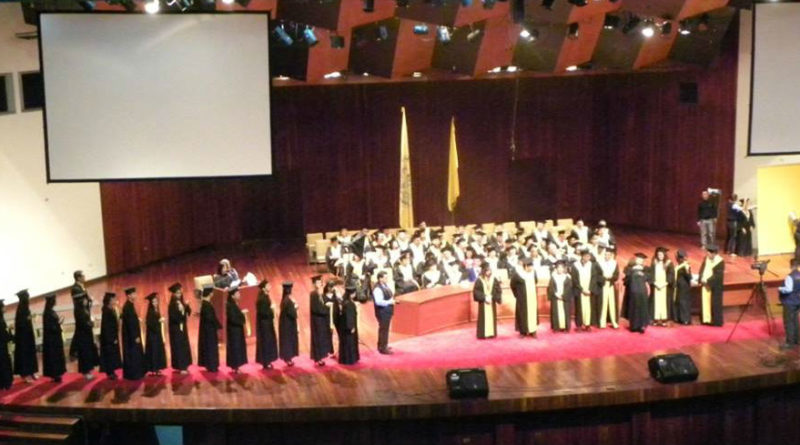 By: Daniel A. Tovar, Research Associate at the Council on Hemispheric Affairs

Higher education in Venezuela is offered at universities, polytechnic institutes, university colleges, institutes of technology, as well as private colleges and universities. The newer public university, the Universidad Bolivariana, offers open admissions and has been the driving force behind the massive growth in tertiary enrollments over the last decade. At the University of the Armed Forces, the enrollment has reportedly grown from 3,200 in 2003 to 224,000 in 2007. Meanwhile, the private sector, which previously accounted for 40 percent of all tertiary enrollments, now teaches less than 20 percent of Venezuela’s student population.[1]

On May 16, Manuel Fernández, the Minister of People’s Power for college education, introduced a new concept within the educational scenario in Venezuela: the democratization of education.[2] In his speech, Mr. Fernández emphasized the need for a complete democratization of college access in Venezuela and established that 100 percent of the academic quotas assigned within public universities will be the government’s responsibility. According to the Minister, the new admission system designed for the Oficina de Planificación del Sector Universitario (Planning Office of Universities Sector; OPSU) will distribute 340,000 academic openings throughout the country by November 2015. However, the new admission system considers several criteria of each individual student, opening up a debate about changing the social implications of college admissions in Venezuela.

Analysis of the New Admission System

On December 16, 2014, OPSU approved several reforms to the college admission system regarding student social-economic aspects. Until 2007, the former system considered only two criteria from prospective students: the scholastic aptitude test (40 percent) and, the admission test (60 percent). In contrast, the recently approved system uses four categories to determine student admission to a college program, arguing that standardized tests should not be the sole determinants of, nor should they be used to prevent the acceptance of poor and working class students’ for admission into university.

In this regard, the government now considers a student’s academic history (50 percent) and socio-economic background (30 percent) in the application process. In addition, the new system also considers territoriality (15 percent), as well as social participation (5 percent), which, according to Minister Fernández, is “another dimension of the human being.”[3]

However, it is important to analyze the social implications of each category. First, by reducing the levels of academic admission standards, more students from public high schools may be admitted into public universities across the country, improving the social inclusion strategy of Venezuela’s higher education system. In general, pro-reform students support this requirement as it is considered a fair strategy that may ultimately work to improve living conditions by curtailing social ills like informal laboring and criminality.

Nevertheless, dissenting students in Venezuela argue that the requirement “also means that a remarkable academic background will not guarantee a spot in universities.”[4] To them, the new admission system may result in a lack of encouragement for academic excellence, which in turn may generate some apathy toward the academic system in Venezuela.[5] In response to such criticism, Minister Fernández claimed, “there are about 800 to 4000 [remarkable] students who have not been assigned a spot in university enrollment…we have clearly identified them and what they want to study in order to progressively guarantee [the most inclusive] quota.” Also, he referred to certain sectors that require special attention in order to reach an inclusive enrollment quota, stating “we have been identifying populations (indigenous peoples, rural border populations, prisoners) and students at or above grade 18 points.”[6]

Second, the consideration of socio-economic circumstances is a substantial improvement in the Venezuelan college admissions system. In fact, this policy seeks to continue diversifying college education by allowing middle and the lower class students to further their education. According to Asalia Venegas, professor at the Central University of Venezuela (UCV), “as part of this policy of democratization… enrollment has risen from 700,000 students by 1999 to more than 2.7 million over the past sixteen years, placing Venezuela as the fifth country in the world and second in Latin America with the highest college enrollment.”[7]

The third criterion regarding the territorial location of students has been criticized since it limits the choice of where to study by imposing location requirements for university applications. To Jesús González, coordinator of the Research and Analysis Unit of the Secretariat of the Central University of Venezuela (UCV), the system leads to a “deterioration of academic merits,” since its application has “no scientific or theoretical basis.” Moreover, he argues, “a remarkable student from a different city will not be able to study at the medical school of UCLA since he does not meet the territorial criteria.” In this regard, his investigation indicates that in 85 percent of the recent admissions cases analyzed, the influence of academic performance is less than 50 percent, whereas 85 percent of the allocation depends on extracurricular factors.[8]

Education expert Asalia Venegas argues, however, that the policy of “territorialization” of education is a platform created by the Venezuelan government to democratize entrance to universities and it seeks to continue the popular inclusion raised by Mission Sucre. This social mission was started by Chávez to guarantee broad access to education at the tertiary level, and the National System of College Entrance 2015 recognizes it today. [9]

The last criterion is concerned with social participation. According to Minister Fernández, “since the development of the native-land is a priority, activism and participation is important… therefore we are giving 5 percent to those students involved in social participation.”[10] Some opponents of this criterion argue that it may be used to encourage political activism and that such a requirement is addressed at the secondary level. The President of the Council of the Simón Bolívar University (USB), Alfredo Graffe argued that “the admissions process becomes a political issue since the government introduced another kind of social participation…perhaps the government is asking for student’s political affiliation.”[11] Graffe also claimed that the university’s legal regulation in Venezuela only allows OPSU to address recommendations on admissions system issues to University Council (CU); hence, the OPSU cannot bypass the CU’s autonomy and ignore their authority. Supporters of this criterion argue that community service and the encouragement of cooperative values ought to be part of higher education.

The new system’s application has opened a debate about its social aims. In general, the reforms seek to guarantee social inclusion to the educational system in Venezuela, promoting the ability of all Venezuelan citizens to live and develop their full potentials. However, for some critics, the reforms give too much weight to non academic criteria and encroaches on academic and institutional autonomy.[12]

As a result, pro-government student movement representatives took to the streets of Caracas supporting the “democratic admissions system to public universities in Venezuela” by presenting a document that would strengthen the new system. Also, Mario Marques, the President of the Medical School Center of Central University of Venezuela (UCV), argues that, “students from Miranda, Caracas, and Vargas support the fair admissions system to college programs” since the system accepts a remarkable students from middle class and students from rural areas.[13]

Nonetheless, it is widely known that the opposition student movement has frequently protested against a number of government policies since 2002. In fact, in 2014, the political movement la Salida (the Exit) was launched after several student-led protests. In addition, this opposition movement has an active social agenda regarding education that includes topics such as budget reform and university autonomy. Therefore, according to Luis Fuenmayor Toro, former director of OPSU, the new admissions system could “focus on and monitor further social movements originated within universities” across the country, giving a political purpose to these reforms.[14] It is not clear, however, how changing the enrollment criteria itself would signal an increase in surveillance.

Moreover, Asalia Venegas believes the State’s role in increasing enrollment is “vital,” and she acknowledges the reform’s “process of politicization,” stating that it “sets [the reform] apart from neoliberal policies.” She goes on to say, “One of the premises of neoliberalism is the issue of individualism: my goal is to study, graduate and I care very little about what happens around me”[15] Thus, to some Venezuelans seeking an education, the political aspects of the admissions reform reflect the inclusion and progress of other Bolivarian missions.

Educational Reforms Across the Region

The educational issue has long been debated in Latin America, and social pressure for access to universities has been increasing in the region. According to the Higher Education Coordinator at the World Bank, Francisco Marmolejo, “the enrollment in higher education system [in Latin America and the Caribbean] has substantially increased throughout the past few years.”[16] Marmolejo established that right now, there are three admissions models in Latin America: the “regulatory model” led by Cuba and Venezuela, where the government controls 100 percent of quota assignation; the “market model” headed by Chile, presenting a high rate of private universities; and the “hybrid model” guided by Mexico, where the government has a limited influence (60 percent) in the admissions process.

However, several countries have promoted reforms on its access and admissions systems in the region. Aside from the aforementioned case in Venezuela, the Chilean government is promoting an education reform that implements free access to university students. Additionally, in 2012, Brazil approved a regulation in which 50 percent of public university seats will be reserved for mulattos, indigenous, and the low-income sector. [17]

Although the political implications of these processes are still open for debate, the new admissions system in Venezuela greatly reflects regional social movements oriented towards inclusion of the low-income population into social programs. As the General Director of Academic Development of the Ministry of Popular Power for University Education, Luis Peñalver, states, “The system guarantees students admission to public universities…the privatization of universities, which was in favor of upper-class students, decreased opportunities to poor class students.” Thus, up until now, the new system has produced two admissions processes with 197,162 allocations, whereas 64,696 public university quotas are still available for remarkable students across the country.

Education policy reform in Venezuela, while generating debate over the rationale of the new enrollment criteria, has in practice resulted in rising literacy and enrollment rates. According to World Education News and Reviews, “Educational outreach programs have brought Venezuelan literacy rates up to regional standards, with the number of children attending school increasing from 6 million in 1998 to 13 million in 2011… the secondary NER has risen from 48 percent to 72 percent over the same timeframe… at the tertiary level, the gross enrollment ratio has exploded to 78 percent (2009) from just 28 percent in 2000, with open access policies prompting tens of thousands of non-traditional and disadvantaged learners to enter the system.”[18]

The government appears to be trying to address criticism over the reduced weight of academic performance as one of the entrance criteria for higher education admissions. Minister Fernández guaranteed “the government is willing to talk with university authorities and various industry groups on the National System of Income (SNI) to ensure fair, inclusive and transparent access to higher education.” Also, he stated that the government is “not interested in a conflict” and they are ready to discuss ideas—excluding any reference to a political debate.[19]

Venezuela has proven itself to be effective in implementing education reforms. In order to avoid political repercussions, the new chapter in Venezuela’s higher education must be oriented toward enhancing academic performance and improving socio-economic conditions in order to guarantee social inclusion and equal human development. A more inclusive admissions process will be successful only if student retention programs are implemented at the university level. As the Rector of the National Experimental Polytechnic University (UNEXPO), Rita Elena Áñez claims, “The goal is not to go to college, but rather to graduate from college.”

By: Daniel A. Tovar, Research Associate at the Council on Hemispheric Affairs