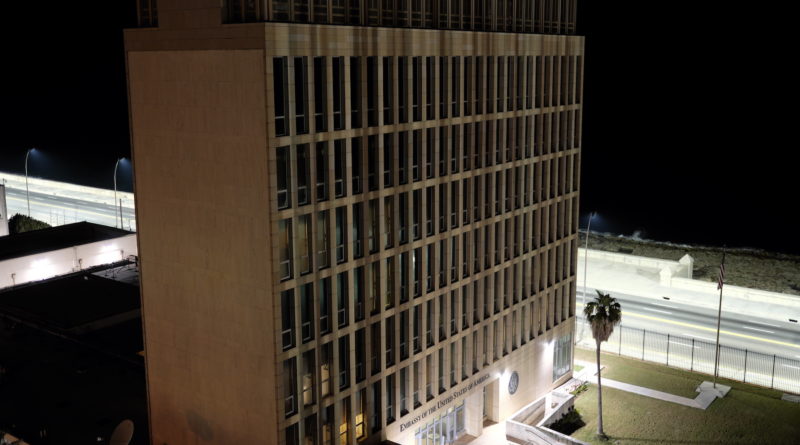 The mysterious ‘sonic attacks’ on several of U.S. diplomats in Havana have sparked waves of speculation. The case resembles a script from a James Bond film: at the end of 2016, the State Department received the first reports of diplomats showing health symptoms including mild traumatic brain injury, permanent hearing loss, loss of balance, severe headaches and swelling of the brain. [i] After several months of investigation, U.S. officials concluded that those affected had been “exposed to an advanced device that operated outside the range of audible sound and had been deployed either inside or outside their residences.” [ii] In May, State Department spokeswoman Heather Nauert linked the decision to expel two diplomats from the Cuban embassy in Washington DC to the increased number of cases. [iii] Additionally, the five U.S. senators John Cornyn, Tom Cotton, Marco Rubio, Richard Burr, and James Lankford quickly responded to the incidents writing a letter to the Secretary of State urging him to take harsh measures against the island: “Furthermore, we ask that you immediately declare all accredited Cuban diplomats in the United States persona non grata and, if Cuba does not take tangible action, close the U.S. Embassy in Havana.” [iv]

In the following months, more incidents were reported. Some of the diplomats became so sick, they had to be immediately flown to Miami and be treated there. The details of the symptoms baffled experts. In September, the Associated Press filed a report from the island about another case at the Capri Hotel: “The blaring, grinding noise jolted the American diplomat from his bed in a Havana hotel. He moved just a few feet, and there was silence. He climbed back into bed. Inexplicably, the agonizing sound hit him again. It was as if he’d walked through some invisible wall cutting straight through his room.” [v] As a response, the Cuban Ministry of Foreign Relations issued a statement in August regarding the cases. According to the MINREX, the Cuban government had never allowed Cuban territory to be used for any action against any diplomat and seemed to be as surprised as U.S. authorities. They created an inter-institutional committee of experts to investigate the situation. “The Ministry of Foreign Affairs reaffirms that Cuba strictly and seriously complies with its obligations under the Vienna Convention on Diplomatic Relations of 1961 regarding the protection of the integrity of diplomatic agents.” [vi] Similarly, Canadian government officials obtained permission from the Cuban authorities to enter the country and start investigating alongside U.S. authorities after a few of their diplomats on the island suffered similar, but less harmful symptoms. According to The Star newspaper, a Canadian official who spoke on background said that it was not clear what caused these incidents and that Cuban authorities were “eager” to collaborate and resolve the issue. [vii]

U.S. officials have remained tight-lipped about this case. According to the information released by the Associated Press, the incidents only happened in specific rooms or sections of buildings housing diplomatic staff. Fulton Armstrong, an ex-CIA official who served in Cuba before the normalization process began, said the whole incident is just a mystery: “None of this has a reasonable explanation,” he said.

Much of the narrative up until now has also relied on the premise that the symptoms of U.S. and Canadian diplomatic officials originate from Cuba’s “secret ultrasonic weapon,” and that Cuba, a developing nation, possesses technology that even U.S. experts are riddled about. According to some specialists, the symptoms experienced by the patients were incongruent with any sort of sonic weapon or device deliberately used to inflict harm. Former MIT researcher and psychoacoustics expert Joseph Pompei says the symptoms do not align with sonic weaponry: “Brain damage and concussions, it’s not possible.” For that to work, he adds, “somebody would have to submerge their head into a pool lined with very powerful ultrasound transducers.” [viii] Other theories blame the Russian government, the Iranians, Venezuela, hardliners in Miami, or a ‘rogue faction of the Cuban government.’ None of these has any basis in fact as for now.

While the FBI and the Royal Canadian Mounted Police continue their investigation, Secretary of State Rex Tillerson, recently commented on the issues during his appearance on CBS’s “Face the Nation” on September 17. There, he said the Trump administration was considering closing the United States Embassy in Havana due to the unexplained health symptoms of 21 diplomats on the island. [ix] According to Arturo Lopez-Levy, professor at the University of Texas and expert analyst on U.S.-Cuban affairs, there are several factors to consider after the Secretary of State’s comments. “It was important that the Secretary identified the issue as ‘under review.’ He didn’t prejudge results or worst, threaten with embassy closure. He also didn’t launch an ideological tirade against the Cuban government or insisted on responding, or echoing the letter of the five senators.”

From a historical standpoint, the attacks coincided with the normalization process of both nations. Barack Obama had pursued a policy of rapprochement with Cuba. On July 20, 2015, Cuba opened its embassy in Washington D.C. for the first time in about half a century. The historical resumption of diplomatic relations with the neighbouring country remained unaffected even with President Trump’s departure from the Cuba policy of his predecessor in June of this year.

In the past, the U.S. and Cuba have engaged in a propaganda war. The ‘U.S. Interest Section’ in Havana built a ticker and began streaming messages to the Cuban population, “I have a dream that one day this nation will rise up” from black civil rights leader Martin Luther King, an act former president Fidel Castro described as “provocative.” [x] As a response, the Cubans built a monument of 138 black flags with a white star in the middle, representing all the victims of U.S. aggression to block the view of the panel.

Obama’s speech in Havana in 2016 and his efforts toward rapprochement were important steps to bring the countries closer together. He offered a different narrative to its predecessors when he spoke about leaving behind the “shadows of history between their relationship” and how the future of Cuba was in the hands of Cubans alone.

While the multi-country investigation continues, the Cuba-US Bilateral Commission held its 6th meeting in Washington D.C. on September 19. According to the island’s Foreign Affairs Department, the “delegation expressed readiness to actively implement the bilateral accords that have been formalized over the past two years.” Cuban authorities also “delivered specific proposals to advance bilateral cooperation in areas of environmental protection, law enforcement, health, agriculture, hydrography and geodesy.” [xi] Following this complex investigation, it remains unknown how this case will affect diplomatic talks. The Cuban government made it clear earlier this week in an official statement, that if bilateral talks fail, it won’t be because of them.