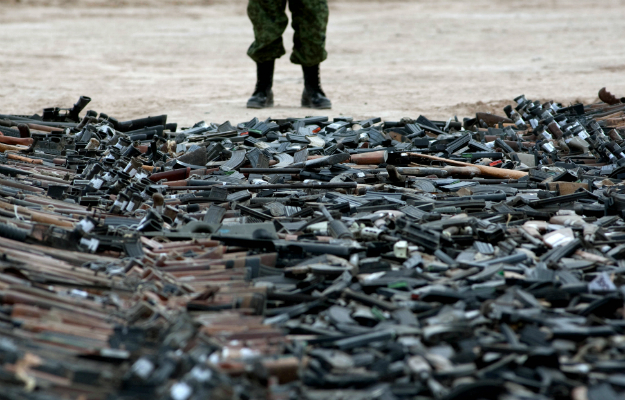 If the countries of Latin America wish to promote peace in the region, they must keep a vigilant eye on arms control. A simple and effective way to build trust and confidence between nations is to promote transparency in the arms trade. Openness in the buying and selling of arms alleviates international tensions, helps prevent illicit transfers, and reduces the potential for an arms race. The United States alone has sold countless weapons to Argentina, Brazil, Mexico, Chile, Colombia, Peru, and other Latin American nations. The extent of weapons imported from outside Latin America as well as those transferred between the countries in the region should be made known.  However, national security concerns and a lack of competent state institutions often prevent states from reporting their arms transfers and behaving in a fully transparent manner.

Recent negotiations on a comprehensive Arms Trade Treaty have sparked hope for increased transparency in the regional and global arms trade, but these expectations must be tempered by an acknowledgement of the failures of previous attempts to elicit universal participation by the United Nations and the Organization of American States (OAS). Governments must bear in mind that improving transparency is a gradual process. The OAS Transparency Convention and the U.N. Register of Conventional Arms (UNROCA) have been instrumental in the movement toward greater openness and accountability, but the recent decline in arms reporting signals the need for an update to the system. While a potential Arms Trade Treaty is not the final answer to a complex issue, it could provide an opportunity to jolt Latin America out of its lackluster arms transfer reporting habits.

UNROCA and the OAS Transparency Convention

UNROCA, the primary global mechanism for arms trade transparency, has had moderate success in Latin America. Established in 1991, UNROCA requests that states submit annual reports of their imports and exports of tanks, aircraft, artillery, missiles, and other heavy weapons. UNROCA then compiles the reports, distributes them to U.N. member states, and publicly posts them on its website.1 Participation in UNROCA peaked in 2002, when 26 of 33 Latin American countries submitted their reports, but it has since fallen to between 10 and 15 countries submitting reports each year.2 The least cooperative countries have been the Dominican Republic and Venezuela, which have submitted only one report each since the year 2000.3

There are two reasons why UNROCA has not achieved a high level of participation in Latin America. First, the Register is not legally binding; states are only asked to submit their reports voluntarily. Second, UNROCA does not require the reporting of small arms and light weapons (SALW). Critics have been quick to point out that most of the violence in Latin America has been caused by SALW, not heavy weapons like battleships or combat aircraft. Since 2003, UNROCA has called on countries to report their SALW transfers, but few nations have accepted this challenge.  Because of these shortfalls, UNROCA has not achieved the participation necessary to be an effective transparency mechanism.

Even when countries do report their arms transfers to UNROCA or the OAS General Secretary, the accuracy and completeness of their reports are often substandard. Brazil and Mexico, the two largest arms exporters in Latin America, both report to UNROCA, but are ranked below average in transparency by the Small Arms Survey, a Geneva-based research institution that works closely with the United Nations. In the Small Arms Survey’s 2012 Small Arms Trade Transparency Barometer, Brazil received 1 point out of 6.5 for clarity of reports, and 1.5 points out of 5 for comprehensiveness of reports. Mexico received 1.5 points for clarity and 2.5 for comprehensiveness.8

UNROCA and the OAS receive many blank or incomplete reports even though outside sources indicate that those countries did in fact import or export weapons in that year. For example, in Mexico’s reports to UNROCA from 2008 to 2010 (the most recent year for which information is available to the public), only one transfer was listed: 21 Land Rovers imported from the United Kingdom in 2009.9 However, this statistic does not match up with the numbers in the independent arms transfer database compiled by the Stockholm International Peace Research Institute (SIPRI). According to SIPRI experts, from 2008 to 2010, Mexico imported at least 3 helicopters from France, 2 unmanned aerial vehicles from Israel, 15 transport and maritime patrol aircraft from Spain, and 8 helicopters from the United States.10 There is a great discrepancy between reality and what is actually being reported. Mexico’s reporting problems are representative of the rest of Latin America, so the road to genuine transparency will be daunting.

It seems that the main reason that countries do not report all of their arms transfers is national security. In order to protect their interests, countries may wish to hide their military capabilities, defense strategies, and arms transfers from specific governments. If a state wishes to conceal its arms transfers and has no desire to be transparent, there is not much that can be done to convince it otherwise.

However, some countries have good intentions but simply lack the capacity to fulfill their reporting duties properly. Major impediments to full reporting include the unavailability of information, lack of material and human resources, and poor inter-agency cooperation.11 Although the standardization of reporting forms has solved some of these procedural problems, many still persist.

If the Arms Trade Treaty (ATT) is agreed upon next year, it could be the next step toward a global arms trade transparency system. In July, U.N. member states gathered for an ATT Negotiating Conference and appeared to be headed toward consensus, but on the last day, the United States called for more time, a request which was immediately echoed by Cuba, North Korea, Russia, and Venezuela. However, the latest draft of the treaty, from July 26, will most likely be used as the basis of the next, and hopefully final, ATT negotiating conference in 2013.

The ATT covers a wide range of arms export controls, but its provisions on transparency may make the most important difference in current practices. The July 26 draft of the ATT calls for countries to report imports and exports of all of the UNROCA categories as well as SALW.12 The inclusion of SALW reporting is crucial for Latin America, as it has never before been a legal requirement. Unfortunately, Article 10(5) of the ATT draft still retains an opt-out clause that says “reports may exclude commercially sensitive or national security information.”13 Thus, the countries that obfuscated their arms transfers under the UNROCA and the OAS Transparency Convention will most likely continue to ignore their reporting obligations, appealing to this clause.

Thankfully, a number of Latin American countries have indicated a desire to change their reporting practices for the better. Belize, Chile, Colombia, Costa Rica, El Salvador, Guatemala, Guyana, Peru, Suriname, Uruguay, and the Caribbean Community have all expressed strong support for the verification mechanisms in the ATT.14 These countries are by far the most likely to ratify the treaty and report regularly and responsibly. Other countries expressed less positive opinions of transparency in the ATT. In a July 14 draft paper, Brazil said that it would only support mandatory reporting if it excluded SALW, a troubling sign. Cuba called for reporting to be voluntary rather than a requirement in a statement at the ATT conference on July 5, so it appears as though it will continue to adhere to its current lack of reporting. The remaining Latin American countries did not provide clear indications of whether they approved of the draft’s reporting requirements, so gauging their potential participation is difficult. Overall, there is enough support in the region to indicate that the passing of the ATT next year could herald the next stage of arms trade transparency in Latin America.

The ATT will be especially helpful for countries that need help developing the state capacity to introduce transparency measures. The draft treaty includes a section on international cooperation and creates a “voluntary trust fund to assist requesting States Parties requiring such assistance to implement the Treaty.”15 Many of the wealthier European countries have been trumpeting the ATT and would be likely to contribute to the trust fund. With just a little financial assistance and access to the expertise of nations that are already experienced reporters, small Latin American countries would be able to start providing accurate and complete information.

Today, Latin America only accounts for between two and four percent of the global arms trade, a figure that is lower than the historical standard.16 The region’s current decline in arms transfers should be looked upon as a positive trend, but it needs to be consolidated by opening the arms trade up to as much transparency as possible. Supporters of peace should consider the ATT with a cautious optimism. If the negotiations next year do not stray too far from the July 26 draft text in regard to transparency and a consensus is reached, half the battle will be won. The other half will be fought in the years to come, over the actual implementation of the treaty in Latin America. The region must realize that although arms trade transparency does not prevent all armed conflict, it is an undeniably positive step in combating illicit transfers, reducing international tensions, and alleviating violence.

15 “The Draft of the Arms Trade Treaty.”

Washington and Asunción: An Uphill Relationship