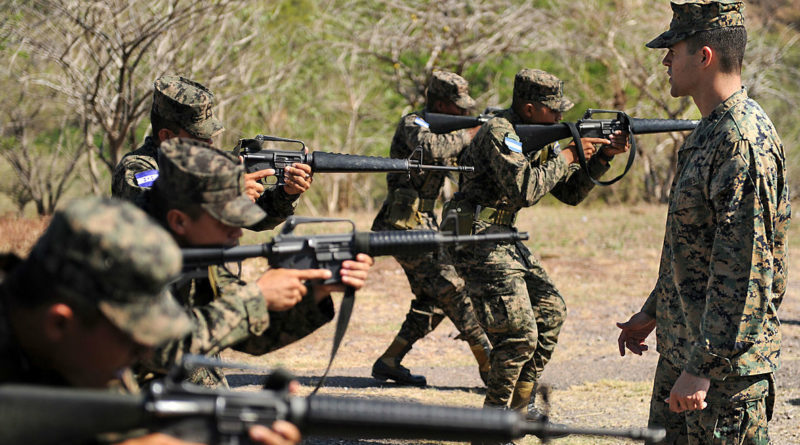 Translated By: Sofia Rada, Research Associate at the Council on Hemispheric Affairs

On June 2, the United States announced that 180 Marines would be deployed to Honduras as a preventative measure primarily concerning the upcoming hurricane season. Both the U.S. Marines and the White House affirmed that the military mobilization will be temporary and that its functions will only be used to protect the local populace in the case of a natural disaster.[1]

Regional specialists, however, fear that the presence of sophisticated U.S. military and surveillance equipment, as well as the sheer number of Marines that the United States brought to the Soto Cano Base Area in Palmerola, signal that this mobilization is the beginning of a new round of expansion of the United States’ presence in Central America reminiscent of Washington’s practices during the 1980s. These assumptions are based on how the United States has favorably supported the new Honduran government, despite it being established by the illegitimate removal of former Honduran President Manuel Zelaya from office by military troops on June 28, 2009.

Countries in the Americas have been skeptical about the authenticity of the 2009 coup d’état and the statements made by President Barack Obama regarding this issue. In fact, according to the journalist Michael Parenti, certain indicators suggest that the 2009 Honduran coup was sponsored by the United States.[2]  In her book Hard Choices, former Secretary of State Hillary Clinton admitted “that she used the power of her office to make sure that Zelaya would not return to office.”[3] It was later revealed that the cadre of influential lobbyists hired to galvanize support in Washington for the coup have strong ties to both Hillary and Bill Clinton.[4] Additionally, many Latin Americans have made definitive links between the United States and the movement that overthrew President Zelaya in 2009, and President Obama shied away from promptly denouncing the military coup in Honduras.

On the other hand, according to a 2009 column written by Noel Brinkerhoff for AllGov, many of the accusations of past U.S. complicity with the military moves in Honduras are based on the fact that, at that moment, and still today, a large segment of the Honduran military receives U.S. training and supplies.[5] This suggests that the military coup that overthrew President Zelaya would not have succeeded if Washington had not conferred the adequate training. However, what is most disquieting about this situation is that, despite knowing how extensively U.S. military training affects the behavior of Honduran troops, the United States agreed to continue providing strategic help to the Honduran armed forces. Washington thus continues to be targeted with accusations regarding the 2009 coup that overthrew President Zelaya. Most notably, the plane carrying Zelaya out of the country stopped and was refueled at the U.S. military base at Palmerola. U.S. authorities, however, insist that they had no knowledge of Zelaya being on the plane.[6]

The allegations of U.S. involvement in the coup are not the only reason for the regional skepticism regarding the recent military deployment in Honduras. According to a LatinNews article on Honduras, the fact that the United States is considering a military expansion to attack regional drug cartels could not only worsen the U.S. reputation in Latin America but also at the international level, because the failure of this mission would be disconcerting for its regional efforts. [7]

According to Heather Gies, it is not the recent military expansion that is most concerning to Hondurans, but rather the fact that neither the United States nor Honduran police have been particularly effective in combating the high index of criminality in the region.[8] In fact, some analysts find that the reason why the Honduran public views the recent U.S. military expansion as ominous is because they do not understand how the deployment of 180 Marines for six months will improve what thousands of police and military have failed to bring about in six years of fighting impunity and crime in the Central American country. [9]

Others take issue with the justification behind the military expansion, arguing that the geographic distance between Honduras and the United States is short enough that the deployment is not necessary, and that, if a natural disaster does occur, immediate collaboration and rapid deployment can be provided. Gies asserts, however, that hurricane protection is simply an excuse used by the United States to justify deploying its troops and thus expanding its military penetration through Latin America.[10]

In fact, according to Gies, what is most surprising about this situation is seeing how the United States applies its international policy selectively, isolating some nations like Venezuela, while supporting other countries such as Honduras, where levels of crime are exorbitant and there is very limited freedom of expression. What is most unnerving about the situation, according to recent declarations of former Salvadoran President Mauricio Funes, is that there is no exact science determining what the United States is looking for in Honduras, nor is there a way to tell whether it is supporting the rule of law or rather the dictatorship. [12] The U.S. State Department’s annual Human Rights Report published this week condemns the cycle of impunity, human trafficking, and domestic violence that pervade Honduras, concluding that, “The [Honduran] government took some steps to prosecute and punish officials who committed abuses, but corruption, intimidation, and the poor functioning of the justice system were serious impediments to the protection of human rights.”[13] Contrary to this stance, it is the government’s ardent militarization of Honduras that has proved to be a most detrimental impediment to promoting human rights.

Although it is stipulated that the U.S military expansion in Honduras will solely be allowed during the strict period corresponding to the hurricane season, there is growing uneasiness among the Honduran population. Recent political and social events in the region give credence to the idea that the U.S. troops will prolong their stay in Honduras. In fact, logic indicates that if the troops are meant to battle drug cartels in addition to possibly providing hurricane relief, then they will need much longer than six months.

It is also of crucial relevance to define the time frame that the U.S. troops will be deployed in order to determine their success in countering the drug cartels and other factors contributing to elevated levels of crime and violence in Honduras. Finally, it would also be interesting to know what the repercussions of the next U.S. presidential elections will have in this process due to the fact that many of the top contenders are running on interventionist ideals, and, if elected, they could cause the military expansion in Honduras to be prolonged or even intensified.