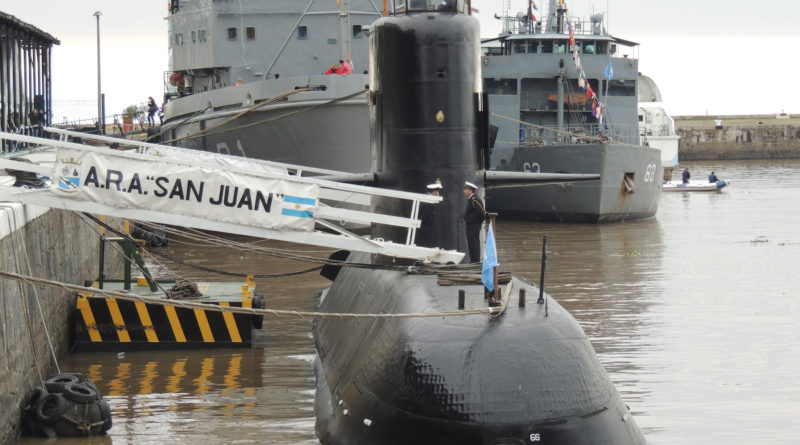 Two full days had passed after the disappearance of the submarine ARA San Juan before Argentine naval spokesman Enrique Balbi offered the first press conference to the nation and, even then, the public was not properly served with any hand information regarding the missing ship. Balbi said he would not talk about a missing ship: “To talk about something missing first we have to seek and not find it,” he said, clinging to protocol in front of the disbelieving gaze of friends and relatives of the 44 missing crew members.

The submarine had disappeared mysteriously in the Gulf of San Jorge, on its way to the naval base at Mar del Plata after departing from Ushuaia, in the southern most part of the country. Its last reported position was 432 kilometers off the Argentine coast. The crew on board consisted of 43 men and one woman.

The Argentine Defense Minister had not been adequately informed of the dire situation by army personnel and was only made aware of the situation after it had become a huge story in mass media.[i] Upon its release, President Mauricio Macri immediately attempted to distance himself from the armed forces’ operations in order to avoid any entanglement with such a controversial institution.

Macri did not hide his anger with how the naval military leadership handled the case. The Ministry of Defense is currently investigating whether there was negligence and “hidden” information on the part of the Navy. In order to relieve commanders and admirals from their elevated positions, the government first needs some certainty about the whereabouts of the San Juan and its crew.

It is now known that the navy’s high command elected not to share some critical information that they had with the government, mass media, and all members of society. They had known from the beginning that there had been a fatal damage to the ship’s batteries and that this flaw caused a short circuit.[ii]

The submarine ARA San Juan sent out its last communication to authorities on Wednesday, November 15 transmitting the following message: “Seawater coming through ventilation system to the tank battery # 3 caused short circuit and started a fire on the balcony bar battery. Bow batteries are now out of service. At the moment in immersion propelling with split circuit. No news from crew. I will keep staff informed.” [iii]

Ever since the information regarding the electric failure became public a week ago, an unprecedented search operation has taken place, involving more than a dozen countries, with a total of 14 naval units who have been frantically searching for the submarine. Six of those ships were tasked with conducting a “sweep” of the ocean floor in the area where the submarine last established contact.

The Navy has known from the beginning that there was a fire involving the sub, but denied it for 12 days. Navy spokesman, Balbi, refrained from using military jargon when he originally said he did not know “where the rumor” about a fire on the submarine came from. Later that same day, it came out that the fire had been reported by the submarine’s captain himself. Still, for the Navy, the information about the fire only “appeared” 12 days later.[iv]

Argentina is currently one of the countries with the lowest percentage of Gross Domestic Product (GDP) earmarked for the Army, which has no doubt affected the conditions of its weaponry and other equipment including the navy’s submarines. The disappearance of ARA San Juan opens up the debate about what the state should do in regards to equipping and updating the Armed Forces. Criticism from some of the relatives of the missing crew pointed to the deterioration of the submarine, and the resounding silence of the political authorities, including the Defense Minister and even the President. Years ago, Macri himself had been critical of investment in the development of a nuclear engine for Navy ships. “I’m terrified,” Macri said at the time, describing such investment as a “squandering of budget”.[v]

The Argentine military forces are a constant reminder to society of the obscurantism surrounding of one of the bloodiest epochs in Argentine history, when they were responsible for the torture and murder of over 30,000 Argentines of all ages. Since the country’s return to democracy in 1983, sealing the gap between the army and civil society has been an impossible task, but a national obsession.

When Néstor Kirchner took office in 2003 the democratic system was young, barely 20 years old. From the first day of his presidency, he pointed to the army and adopted a set of high-impact measures in the military field aimed at reforming it. The ‘progresista’ government not only decided to intervene legally and symbolically regarding the military dictatorship, but also meddled in the privacy of military institutions.

The current Chief of Staff, Marcos Peña, warned the President about “the obscure past” of the army and the public perception that “so far the security forces were as suspect as criminals are.”[vi] Macri was recently surprised to notice that the security forces of the naval Prefecture had called the Ministry of Security to request permission to use their weapons. This request was subsequently approved and resulted in a fatality during an eviction in a land occupation by the Mapuche community in the southern Argentina on November 26th.

Until 2015, the Argentine security forces had been prohibited from using firearms to dislodge or break up demonstrations. Instead they had to use guns with rubber or paint projectiles. Now, Macri, in an attempt to “shift that cultural line” is not only providing weapons to the forces but is giving them the capacity to perform intelligence tasks. This approach of empowering and giving space to the military is reflected in the secrecy and impunity as witnessed throughout the recent search for the missing submarine.

[i] “The Navy had hidden information on the conditions of the ARA San Juan and its crew on board”. Argentine newspaper Infobae. November, 21.

[ii] “The submarine ARA San Juan reported a failure in the batteries before disappearing”. Infobae. November, 20.