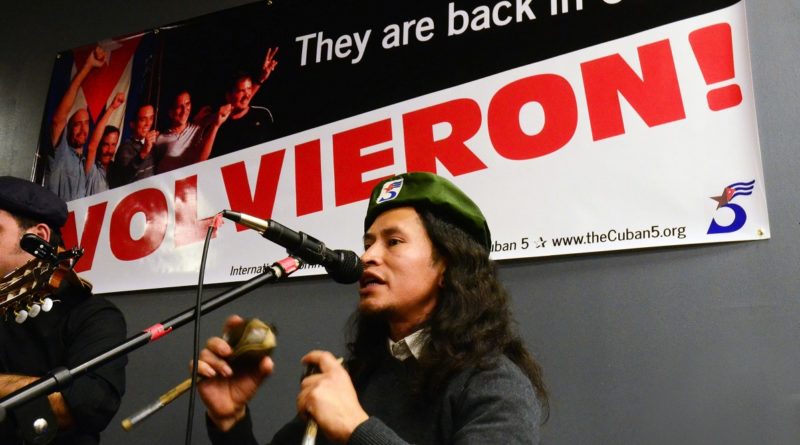 By Alicia Jrapko and Bill Hackwell
From California

Five years ago tomorrow, in near disbelief, we watched on television as the Cuban Five were released from US prisons and flown home after a 16 year struggle.  Leading up there had been some signs that their freedom was being negotiated by the Obama Administration but out of a healthy distrust of the US government we didn’t accept it as reality until we actually saw them arrive in Havana, out of handcuffs, and into the arms of their families.

As intelligence officers the Cuban 5 had been assigned to come to the US to monitor the activities of right wing anti Cuba terrorist groups operating with impunity in Southern Florida in the early 1990’s. They came without weapons with their only intention being to defend the Cuban people against terrorist attacks of various natures that since the Revolution in 1959 was responsible for the deaths of close to 3,500 Cubans.

On September 12, 1998, Antonio Guerrero, Fernando González, Rene González, Ramón Labañino and Gerardo Hernández were arrested and thrown into solitary confinement in a Miami Federal Prison and for the next 18 months they had no contact of any kind. The intention of the US was to wear them down, break them and get them to renounce the revolution.

The guards would remind them constantly that they were forgotten and no one even knew they were there. But as Gerardo Hernandez, who was serving two life sentences plus 15 years, explained to Resumen Latinoamericano, that it was there in June of 2001 when the struggle, which would turn into a worldwide movement, began. “When Fidel acknowledged us and said publicly ‘Volverán!’ (they will return), it was from that moment on when we knew they could not defeat us, that the struggle would be long and hard, as the Commander warned, but that we would return to the homeland. Only someone with his far sighted vision could assure such a thing to the world, at a time when all the hatred and desires for revenge of the empire were turned against us. That’s how big Fidel was. That’s why the return of the Five was his victory, and we were able to celebrate it with him.”

While Fidel provided the spark that started this extraordinary struggle it was the Cuban people, collectively viewing the Five as their own sons, who mobilized as a nation; never wavering. And it was their families, particularly the women, with remarkable strength and dignified courage, who travelled the world to explain that this was a case of simple justice and the right of a nation to defend itself and to co-exist in peace. The Cuban Five were unique political prisoners who enjoyed the support of an entire country inspiring thousands of solidarity activists to join a movement demanding their release. In the beginning it was a few committees and individuals but coinciding with the advent of social media and the internet it grew into a connected international campaign made up of hundreds of solidarity groups in the majority of countries and also actors, artists, lawyers, workers, students, academics, writers and faith based organizations. During those years there were few US embassies or consulates  that were spared regular protests calling for the freedom of the Cuban Five and for three consecutive years people from different states and countries gathered for a week of activities in Washington DC to demand their freedom including protesting in front of the White House.

Gerardo explained how this support was never lost on the Five. “We never forget that if today we have the good fortune of so much happiness, we owe it to the efforts of compañeros and compañeras from Cuba and the world that for many years fought for our liberation. This was also their victory, and there is not a day that goes by in which we do not remember it.”

Five years have gone by, and these men who gave the best years of their lives, not for money or fame but for love of their country, something the US government will never understand, are in the process of integrating into society. As Gerardo told us, “We always dreamt of someday returning to our homeland and contributing together with all our people to the construction of that society to which we all aspire to. Since we have been back we have been contributing our modest efforts, side by side with all Cubans, in the different tasks assigned to us. Personally I feel very happy as Vice Dean of the Higher Institute of International Relations Raul Roa Garcia in Havana, where our diplomats are trained”.

The freedom of the Cuban 5 was an integral key in the steps made by Obama towards normalization of relations with Cuba that he carried out through negotiations with the Cuban government.

Since Trump came to office he has reversed most of Obama’s gestures towards the Island by the odd illusory and transitory privilege, the Executive Order. But Trump didn’t stop there. He has used one Executive Order after another to tighten the blockade that has gone now for over 60 years. It seems like every morning the Cuban people wake to find yet another bolt of punishment, based on unfounded pretext, coming their way from the oval office.

While the Cubans constantly express their willingness to dialogue with the US in an atmosphere of mutual respect they will not bend to the threats and arrogant behavior.

And one thing is for sure, no Executive Order can be issued that would reverse the return of the Five Cuban Heroes to their homeland.

Alicia Jrapko is co-editor of Resumen Latinoamericano, US bureau, and co-chair of the National Network on Cuba and the US coordinator of the International Committee for Peace, Justice and Dignity.

Bill Hackwell is an organizer with the International Committee for Peace Justice and Dignity and an editor for the English edition of Resumen Latinoamericano.