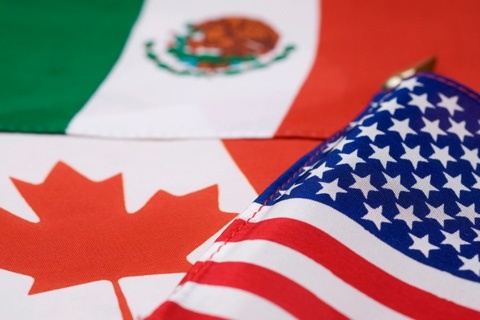 On December 8, 1993, a triumphant President Bill Clinton signed the North American Free Trade Association (NAFTA) bill into law. Reflecting popular sentiment, he praised this monumental economic treaty by stating, “I believe we have made a decision now that will permit us to create an economic order in the world that will promote more growth, more equality, better preservation of the environment, and a greater possibility of world peace.” Initially, NAFTA supporters promised a plethora of benefits for the countries of North America. American proponents promised that NAFTA would create more jobs reflecting higher wages in the United States,(1) while also reducing the U.S. trade deficit with Mexico and Canada.(2) Mexican leaders claimed that the bill had the potential to create a sizable and revitalized middle class in Mexico by raising wages and strengthening living conditions for its impoverished citizens. Mexican President Carlos Salinas, whose administration had been tarnished by charges of corruption, proclaimed that NAFTA would, at long last, enable Mexico to join the developed world.(3) Likewise, leaders from both countries pitched NAFTA as a solution to illegal migration across the U.S.-Mexico border; with more and better-paying jobs, as well as cheaper goods in Mexico, the United States would no longer be an attractive land of opportunity.(4) Regrettably, the majority of these promises never materialized. The limited benefits that have resulted from NAFTA have been overshadowed by its numerous failures, which have both negatively affected the United States and greatly harmed Mexico, especially in the agricultural sector.

Failures for the United States

In 1992, Gary Hufbauer, a NAFTA enthusiast from the Institute of International Economics, predicted that “NAFTA will generate a $7 to $9 billion [USD] surplus that would ensure the net creation of 170,000 jobs in the U.S. economy the first year.”(5) However, quite the opposite occurred; the U.S. trade deficit with both Mexico and Canada increased, costing the United States an estimated 150,000 jobs in 1994 alone.(6) According to the United States Census Bureau, while the United States actually had a trade surplus with Mexico of approximately $1 billion USD in both 1993 and 1994, by 2007 the growing trade deficit with Mexico had reached an all-time high, at $74 billion USD.(7) Although U.S. exports to Mexico did increase slightly under NAFTA, the U.S. encountered the new problem of “revolving door exports.” Most U.S. exports to Mexico have consisted of mechanical parts, which are used to assemble goods in Mexican factories that are then imported back into the United States for cheap, a process known as the maquiladora system. Such exports have doubled since the implementation of NAFTA, leading only to more imports from Mexico and a deepening trade deficit.(8)

The combination of increased imports from Mexico and a growing trade deficit have led to job losses, mostly in high-wage, non-college-educated manufacturing positions, in all 50 U.S. states and the District of Colombia.(9) When these displaced American workers later re-enter the job market, they find difficulty securing new jobs and often have to settle for markedly lower wages. As of March 2011, the United States has lost approximately 700,000 jobs due to disruptions in supply chains brought about by NAFTA.(10)

Although NAFTA has been detrimental for the United States, the free trade agreement has been far worse for Mexico. While proponents touted NAFTA as ostensibly a beneficial social policy, the income gap in Mexico has in fact widened since NAFTA’s implementation, with this development creating even more poverty in a country already afflicted with the concentration of wealth in too few hands. The poverty rate in Mexico rose from 45.6 percent in 1994 to 50.3 percent in 2000, and the number continues to climb.(11) In 2010, the World Bank reported the most recent poverty rate in Mexico at 51.3 percent.(12)

Perhaps the most devastating blow dealt by NAFTA to the Mexican economy was the near destruction of Mexico’s agricultural sector, in which 2 million farm workers lost their jobs and 8 million small-scale farmers were forced to sell their land at disastrously low prices, or desert it, due to sharply declining food prices.(13) Importantly, the U.S. government subsidizes many domestically produced agricultural products, allowing the products to be sold to Mexico at prices 30 percent below the cost of production.(14) Thus, after NAFTA’s inauguration, U.S. agricultural exports crowded out Mexican agriculture produce, and the United States became the main food supplier of Mexico. In one case, U.S. corn exports, by maintaining subsidized prices, have all but rendered Mexican corn cultivation obsolete and non-competitive. Corn, or maize, had been one of the main crops and an integral part of the identity of the Mexican people since pre-Columbian days, but due to subsidized U.S. agricultural products, this tradition has all but come to an end. Thus, NAFTA has not only negatively impacted Mexico’s economy, but also altered its national identity by infringing on ancestral traditions.

Due to the decline in the competitiveness of Mexican agricultural products, the rural population has been pushed from the countryside into the cities to seek employment in the booming manufacturing sector, one of the many paradoxical consequences of NAFTA. Many American corporations took advantage of this plethora of cheap labor and constructed factories along the U.S.-Mexico border, creating the maquiladora system. While these factories, or maquilas, created 1.3 million jobs in the export-manufacturing sector, they still were not able to counterbalance jobs lost in the agricultural sector, and it was not long before foreign competition threatened these newly created jobs.(15) Since 2001, one third of all NAFTA-created manufacturing jobs in Mexico have disappeared as North American corporations continue to offshore operations to China, where manufacturing wages are about an eighth of those in Mexico.(16) Although NAFTA is not the only cause of the economic distress Mexico has faced in the past decade, the economic pact failed to generate a Mexican economy capable of competing in a global market, thus negating what little economic benefit it brought Mexico.

Moreover, even with the creation of new manufacturing jobs, Mexican living conditions have consistently declined since NAFTA’s advent. In the pact’s first five years, real wages in Mexico fell by 20 percent, and workers in the manufacturing sector now earn about a fourth of their pre-NAFTA wages.(17) Additionally, the prices of most goods in Mexico have significantly increased. The cost of tortillas, which represent 75 percent of the daily caloric intake for Mexico’s poor, increased by 571 percent in the first six years of NAFTA, rendering meager wages even more insufficient than before NAFTA’s implementation(18) and making it increasingly difficult for families to meet basic needs. Wage disparities between Americans and Mexicans have also widened. In 1994, Mexicans earned 23 percent of what Americans earned overall; by 2006, the differential had dropped to 12 percent.(19) With this wage reduction, the lower class in Mexico has expanded, pushing more poverty-stricken individuals into areas that were already troubled by inadequate housing, healthcare, and public safety,(20) and generating further problems for the Mexican state, such as drug violence and urban sprawl.

In an argument that helped push the bill through the U.S. Congress, Janet Reno, attorney general during the Clinton administration, proclaimed that NAFTA would decrease illegal immigration by two-thirds in six years.(21) However, this too was a hollow promise. Prior to 1994, illegal immigration across the U.S.-Mexico border was declining, but eight years after NAFTA’s enactment, this trend had reversed, resulting in a 61 percent increase.(22) In 1995, there were 2.5 million illegal Mexican immigrants in the United States; by 2006, there were more than 20 million,(23) two-thirds of whom came to the country after the implementation of NAFTA in 1994.(24)

Every year, some 500,000 Mexicans risk their lives to cross the border because they can no longer make a living in the destroyed Mexican manufacturing and agricultural sectors. Proponents of NAFTA promised the Mexican people a decent living, but 18 years later more and more Mexicans have little choice but to leave Mexico for the United States each year, resulting in growing concerns in the United States over these trends. Americans’ concerns about losing their jobs to “illegals,” especially since the economic crisis of 2008, have become a dominant part of American political dialogue. However, there exists another, less acknowledged discussion—one that understands that the presence of illegal immigrants is partially beneficial to the U.S. economy. Because of the abundance of undocumented workers, American farmers can pay wages that are a fraction of the $10 an hour they are required to pay legal U.S. residents.(25) While this is certainly a nefarious practice, the American public derives much benefit from it: If these farms employed only legal residents, prices on American goods would skyrocket. For example, it is estimated that orange juice would cost upwards of $20 per gallon if only documented workers picked oranges on Florida’s orange farms.(26) The U.S. government has increased spending on border control without taking into account these various factors.(27)

Overall, neither the United States nor Mexico has seen the benefits promised from NAFTA, but Mexico should be most disappointed. The writers of the bill failed to provide equitable stipulations for labor conditions, environmental protection, or investment regulations. Laborers on both sides of the border saw their collective bargaining powers diminish after NAFTA. Mexico, the United States, and Canada must transform NAFTA from a “free” trade agreement to a “fair” trade agreement through revisions that create jobs instead of destroying them, protect workers, and create an environment that allows Mexicans to stay in their home country and earn a living wage.