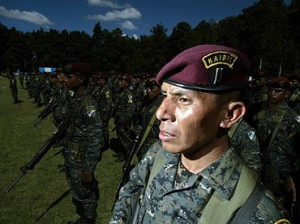 On August 3, 2011, red rose petals outside a criminal court in Guatemala City spelled out “justice.” In a landmark ruling, four former military officers were each sentenced to jail terms of over 6,000 years for the massacre of 201 villagers during the Guatemalan Civil War. Despite hope for a new era that boldly confronts the former routine application of military impunity, the convictions are besmirched by a political agenda.

Before dawn on December 6, 1982, a contingent of Kaibiles—a special operations unit notorious for making recruits bite off the heads of live chickens—descended upon the community of Dos Erres in the northern Petén Department. The commandos accused the inhabitants of collaborating with leftist guerilla insurgents, but produced no evidence. As soldiers guarded the perimeter, the Kaibiles bashed infants against trees, raped and murdered the women, and shot the men before dumping their corpses into a local well.

Nearly thirty years later, three former Kaibiles and a regular were finally sentenced for carrying out this brutal massacre. Manuel Pop Sun, Reyes Collin Gualip, and Daniel Martínez were slammed with thirty years for every death, and an additional thirty years for crimes against humanity, summing up to 6,060 years each. Carlos Antonio Carías, a second lieutenant when the massacre took place, received an extra six years for robbing the victims of their belongings. Guatemala has also requested the extradition of four additional former Kaibiles living abroad; U.S. authorities had detained three of the Kaibiles and deported a certain Pedro Pimentel Ríos, while Canada has one such suspect in custody.

A History of Impunity

The conviction could be a watershed moment for the recognition of heinous atrocities sanctioned and carried out by the state during Guatemala’s 36-year long civil war. Guatemala’s Truth Commission, sponsored by the United Nations (UN), concluded that the conflict had claimed over 200,000 lives and displaced up to one million. Furthermore, the commission blamed right-wing government forces for over 90 percent of the human rights violations, affirming that their selective slaughter of Mayan Indians, who made up 83 percent of the victims, was genocidal.

This ruling was possible because Guatemala’s wartime perpetrators are not protected under a blanket amnesty. Guatemala’s amnesty law, part of the hastily approved National Reconciliation Law passed in 1996 as part of the Peace Accords, ostensibly allows persecution for atrocities such as torture, genocide, and forced disappearance. Yet the vaguely worded law leaves much room for debate and impunity; the Dos Erres conviction was only the second of 669 civil war massacres successfully prosecuted in Guatemalan courts.

The consistent failure to prosecute wartime offenders is part of a prevailing culture of impunity in Guatemala that led the UN to create the International Commission (CICIG) against Impunity in Guatemala in 2006.  Guatemala remains one of the most violent countries in the world, compounded by a jarring 98 percent impunity rate, with only 2 out of every 100 cases actually appearing in court.

Hopefully, the Dos Erres conviction will represent a crucial turning point in addressing military impunity. In fact, the guilty verdict is part of a recent series of high-profile arrests, part of Guatemalan President Álvaro Colom’s attempts to redress past neglect of such abuses. On July 25, the same day that the Dos Erres trial began, a former Guatemalan police chief, Pedro García Arredondo, was dispatched to a military prison in Guatemala City on charges of disappearing a university student during the civil war. The Archbishop’s Human Rights Office had identified the former police chief as a top human rights violator; he has also been implicated in the infamous 1980 burning of the Spanish Embassy that had been occupied by indigenous peasants and their allies.

A month earlier, on June 17, Guatemalan authorities arrested and charged a former general and head of the presidential guard, Héctor Mario López Fuentes, with being the intellectual author of massacres that led to the death of over 300 Mayan Indians from the Ixil region in 1982 and 1983. López Fuentes is the highest-ranking military official to be arraigned for crimes against humanity, genocide and forced disappearances. As a further example, on June 9, a former national police chief, Héctor Bol de la Cruz, was also arrested on charges of disappearing a student leader. Two of his former agents had previously been sentenced on the same grounds to forty years in prison in October 2010.

In addition to these high-profile arrests, President Colom’s strategy for justice included the inauguration, on June 20, of a new archive of official military files from 1954 to 1996, providing public access to 99.3 percent of the documents. This is a crucial step for providing transparency and enabling analysis of the truth from a period of unprecedented brutality.

Despite its benefit to national justice and reconciliation, a renewed focus on civil war crimes by the center-left Colom government may not be entirely noble and altruistic. Former Army General Otto Pérez Molina, an opposition candidate of dubious moral standing, claims that the timing of the charges and resulting proceedings is politically motivated by the upcoming presidential elections in September 2011. Pérez Molina, as a former head of military intelligence, has been accused of deep involvement in war atrocities. In July 2011, human rights defenders appearing before the UN Special Rapporteur on Torture pointed out that half of all the massacres under scrutiny took place during his command in the Quiché Department, between 1982 and 1983. Moreover, their letter accuses Pérez Molina of direct responsibility for the torture and disappearance of prisoner of war Efraín Bámaca Velásquez.

Evidence of guilt not withstanding, Pérez Molina’s counter-accusations may hold some legal weight. President Colom filed to divorce his wife on March 11, to enable her to run for the presidency. However, the Supreme Court ruled on June 30 that the divorce did not evade a constitutional prohibition on relatives of incumbent presidents from pursuing the highest office. First Lady Sandra Torres made a final appeal to Guatemala’s Constitutional Court, which was unanimously rejected on August 8.

It is clear that Colom is attempting to manipulate public opinion as well as the political fate of Pérez Molina by providing a precedent for the trial of war crimes. It is a sadder truth that despite recently enhanced attention on the Guatemalan Civil War, polls reveal that Pérez Molina continues as the clear frontrunner for the presidency. Nevertheless, whatever may come this September, political motivations mustn’t be allowed to undermine the benefits the Dos Erres trial provide to Guatemala in its prolonged, if doomed, search for justice.

This is the first issue in a series that will explore the concept of the New Latin America by focusing on recent developments that highlight how the region contrasts with its past.