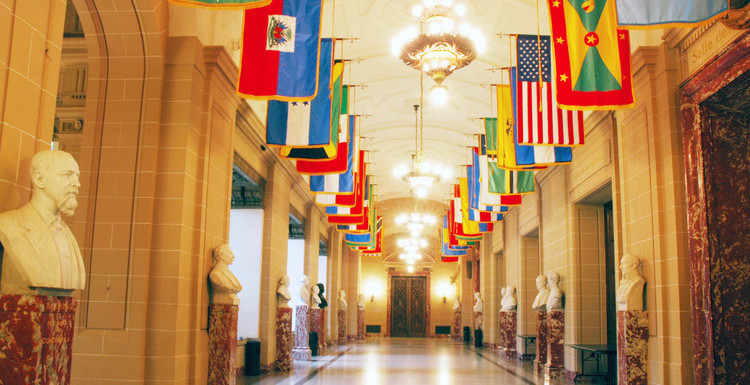 The Council on Hemispheric Affairs (COHA) applauds the declaration of the Organization of American States issued yesterday, “Solidarity and Support for Democratic Institutions, Dialogue, and Peace in the Bolivarian Republic of Venezuela.” The  statement represents a complete repudiation of the Venezuelan far right’s coup strategy and offers a powerful endorsement  for the democratic process. In its statement the OAS voiced its support for the steps taken by President Nicolas Maduro in convening a national peace conference.

During the presidency of Hugo Chávez, Venezuela  led the way in the creation of  Latin American organizations that championed regional independence and integration. Through CELAC, UNASUR, and ALBA Latin America came together in new organizations that specifically excluded the United States and Canada. The OAS therefore stood at the crossroads during its closed-door discussions in Washington yesterday: continued relevance or obsolescence. CELAC had already issued a statement insisting that the region be a zone of peace and mutual respect among nations, and next week UNASUR is likely to declare its solidarity with the Venezuelan government. Therefore, OAS Secretary General José Miguel Insulza’s leadership in drawing together the support for  this important declaration was  vital for maintaining OAS significance in inter-American affairs.

The OAS called for universal respect for human and civil rights, standing in clear opposition to the violent extremists in Venezuela  bent on extra-constitutional regime change. The OAS declared “its appreciation, full support, and encouragement for the initiatives and the efforts of the democratically-elected Government of Venezuela and [called upon] all political, economic, and social sectors to continue to move forward with the process of national dialogue towards political and social reconciliation, in the framework of full respect by all democratic actors for the constitutional guarantees of all.”

The United States, Canada, and Panamá voted against the declaration. The U.S. led the opposition to the declaration, maintaining that the OAS was one-sided in  backing the Venezuelan government. The U.S. view was that the statement undercut “the commitments of all OAS member states to promote and protect human rights and democracy…the OAS has a responsibility to remain neutral,” the U.S. said.  The OAS, “cannot take sides.”

However, Washington has been consistently one-sided regarding Venezuela, providing unyielding support for the opposition. Under President George W. Bush the U.S. eagerly backed the short-lived 2002 coup against the constitutional order. More recently, Washington refused to recognize the presidency of Nicolas Maduro after the April 2013 elections. And over the past month, Secretary of State John Kerry’s pronouncements on Venezuela have shown  a highly selective indignation at the violence in the country. The U.S. stance has had the practical effect of buttressing the “exit” strategy that is preferred by the golpistas, even as this approach is roundly rejected by a large majority of Venezuelans, left and right, who want peace and respect for the constitution. Even the right-wing popular front strategy of Venezuelan opposition leader Henrique Capriles is disavowing the violence at the barricades.

The OAS declaration represents yet another failure for U.S. diplomacy in the region. As COHA Director  Larry Birns has observed, “since the coup in Honduras in 2009, Washington  has actually moved to the right on Latin America policy. Not even conservative governments, with the exception of a predictable satrapy in Panama, want to see a small but resourceful minority engineer regime change in the region.”

As the OAS action  has made plain, the U.S. is increasingly isolated in the region. The OAS has joined the other hemispheric organizations in a rather stunning verdict. The United States is increasingly ignored because its views  and policies stand in opposition to those who would support independent and authentic democracies that advance social and economic justice.