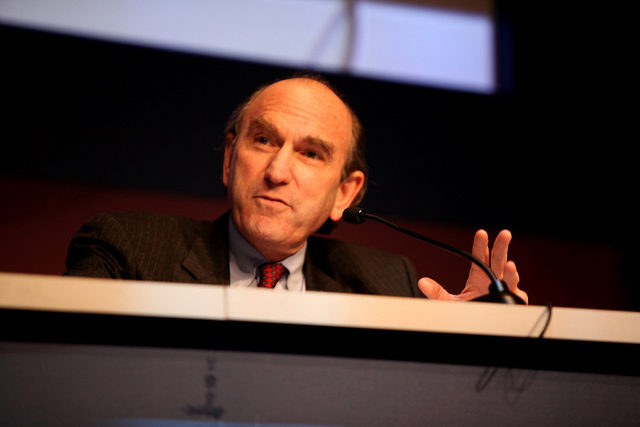 By Taylor Lewis and Kate Terán, Research Associates at the Council on Hemispheric Affairs

With the Trump Administration sponsoring what has been described as one of the most controversial cabinets in contemporary U.S. history, it is critical for those who are interested in such political concerns to not only look at those at the highest level of policy making, but also those who are called upon to support them, particularly the individual being considered for the position of Deputy Secretary of State. On February 6, it was revealed by Politico that Elliott Abrams is under serious consideration for the position, an appointment that would place him directly below Secretary of State Rex Tillerson.[i] Elliott Abrams is a U.S. diplomat who served during both the Reagan and G.W. Bush Administrations. Under President Reagan, he served as the Assistant Secretary of State for International Organization Affairs, the Assistant Secretary of State for Human Rights and Humanitarian Affairs and Assistant Secretary of State for Inter-American Affairs. Under George W. Bush, he served as Deputy National Security Advisor for Global Democracy Strategy, Special Assistant to the President, and Senior Director on the National Security Council for Near East and North African Affairs.[ii] Given his experience, Abrams would appear to be a uniquely qualified choice below Tillerson, who, as the former CEO of Exxon Mobil, has little to no experience working within the U.S. foreign policy positions and its operational base.

Despite his relevant qualifications, however, Elliott Abrams is infamous for withholding a whole series of information from his supervisors and providing false information to Congress at least three times during the investigation into the Iran-Contra Affair during the 1980s, as well as supporting the governments of Guatemala and El Salvador which were actively promoting genocide during the same decade. In 1991, Abrams was convicted and sentenced on two misdemeanor counts of withholding information from Congress. He was later pardoned by President George H.W. Bush in 1992, and in 2001, Abrams was appointed as Special Assistant to President George W. Bush and Senior Director for Democracy, Human Rights, and International Operations at the National Security Council.[iii]  Given that Latin America and the Caribbean have enjoyed an increasing degree of independence and integration in the past two decades, a return to Reagan style interventionism would directly jeopardize diplomatic ties to the region that would have called for continued, stable bilateral relations. In fact, Abrams inflicted such irreparable damage to Washington’s reputation and lack of respect for Latin American opinions or concerns that the name of Elliott Abrams is already guaranteed to go down in infamy.

More generally, the Trump Administration’s repeated inability to seek out even remotely qualified candidates for both cabinet and diplomatic positions is sure to affect the future of U.S.-Latin American relations in a negative manner for years to come.

Moreover, the consideration of Abrams for deputy secretary of state has brought renewed attention to widespread criticism that the Trump administration has been remarkably shortsighted and off-handed in its selection of cabinet members and its methodology to select diplomats thus far. Additionally, the announcement of Mr. Abrams’ candidacy became more troubling with President Trump’s recent claim in an interview with Fox News in which Bill O’Reilly alleged that “Vladimir Putin is a killer”, to which Trump replied, “We have a lot of killers. Well, you think our country is so innocent?””[iv] This comment, while possibly nothing more than “political theater”, begs the question of whether Trump’s administration could be aiming its sights at a new foreign policy agenda that shamelessly uses hegemonic strength to leverage its control of Latin American markets at a detrimental cost to Latin America.

Iran-Contra Affair and other Controversial Precedents

Elliott Abrams is an unprincipled Cold War hardliner who has not easily conceptualized the right of self-representation as evidenced by his exceptionalist approach to Latin America in the 1970-80’s. The Iran-Contra Affair began during the Carter Administration, but escalated under President Reagan as a direct result of his administration’s “anything goes” approach to Nicaragua and Iran. In Nicaragua, Reagan signed an order on December 1, 1981 that directed the CIA to support the paramilitaries of Nicaragua, the “Contras”, with the funds and arms they would need to defeat the Sandinistas.[v] In the mid-1980s, with the codification of the Reagan Doctrine, which called for “supporting democratization everywhere,” it quickly became clear that U.S. operations in Nicaragua were not intended to protect the Nicaraguan people from the danger of the Sandinistas, but rather, an attempt to impose enhanced control by Washington over foreign governments at any cost . In order to do so, and to prevent public disapproval, the Central Intelligence Agency carried out a series of secret attacks against the Sandinistas without prior approval from Congressional intelligence oversight committees.[vi]

One of the leading figures in spearheading these efforts was Abrams, who sought to continue funding the Contras illegally after the formation of the 1982 Boland Agreement, effectively shutting down United States funding of the Contras. To accomplish this, he and others in the U.S.  government sold armaments to militaries around the world and funneled a portion of the revenue received from these transactions to the Contras. Afterwards, when John Kerry (D-MA), a member of the Senate Foreign Relations Committee, asked Abrams during a committee hearing if he knew of any foreign country that financially supported the Contras, he replied, “I don’t know. But not that I am aware of and not through us.”[vii]

Perhaps one of Abrams’ most nefarious actions, aside from evading congressional legislation, was his attempt to protect General Efrain Rios Montt, the Guatemalan dictator whose murderous regime decimated a large number of indigenous populations in the 1980s. According to a report from the United Nations, between 1960 and 1996 in Guatemala, “more than 200,000 died or were subjected to forced disappearance, over 80% from Mayan indigenous populations.”[viii] Furthermore, the commission found that “the state was responsible for systematic violence – including extrajudicial executions, forced disappearances, sexual violence, death squads, the denial of justice, and other crimes and violations.”[ix] In spite of the rampant violence that plagued Guatemala for more than 30 years, Abrams praised General Efrain Rios Montt’s regime as having “brought considerable progress” to the Guatemalan people, going so far as to urge Congress to consider funding his efforts.[x] Moreover, while Elliott Abrams was Assistant Secretary of State, 98 percent of Guatemalans who attempted to seek refuge in the United States were refused asylum and were forced to return to the war zones they once called home.[xi]

The indigenous people of Guatemala were not the only ones to suffer at the hand of Elliott Abrams’ fatal decisions regarding U.S. intervention in the 1980s. Between 1980 and 1992, the Salvadoran Civil War took close to 75,000 lives largely as a result of the United States’ inability to appropriately address the rampant violence the U.S. was funding. In 1982, when reports first emerged out of El Salvador of the “El Mozote” massacre, in which hundreds of Salvadoran civilians were slaughtered by the El Salvadoran military, Abrams denounced these reports as not credible, in an attempt to defend U.S. funding of the violent regime.[xii]  Because of Abrams’ claim that the massacre was nothing more than “fake news,” U.S. dollars continued to flow into the hands of the Salvadoran military which resulted in the death of thousands of innocent Salvadorans.

Even members of the Republican Party, who widely supported Trump’s selection of Rex Tillerson as Secretary of State, have spoken out against Abrams as unfit for the job. Senator Rand Paul (R-KY) wrote on February 6, “I hope Secretary Rex Tillerson will continue the search for expert assistance from experienced, non-convicted diplomats who understand the mistakes of the past and the challenges ahead.”[xiii]

Many Republicans favor Paula Dobriansky for the position, a former diplomat to the U.N. under George W. Bush, who is well liked on both sides of the aisle and has been lauded for her role in the creation of the Paris Climate Agreement in 2015.[xiv] If Abrams were to be appointed and confirmed, testimonies like Rand Paul’s seem to suggest an unavoidable chasm between President Trump, his inner circle, and the traditional Republicans of his party.

The appointment of Elliott Abrams as Deputy Secretary of State would send a message to Latin America that the United States is either unwilling or unable to learn from its past. By putting Abrams in such a key position, the United States would be effectively telling the world that they are willing and able to impose a neoliberal agenda even at the expense of regional peace and independence, and that a man who is almost universally despised by the Latin Americans is somehow being outrageously rewarded for his great misdeeds. Ultimately, the wounds of these wars that Abrams played such a critical role in have not yet healed, as Central American war criminals of the 1970s-80s continue to live with impunity and victims must learn to live in a post-war society.

By Taylor Lewis and Kate Teran, Research Associates at the Council on Hemispheric Affairs

By Kate Terán and Taylor Lewis, Research Associates at the Council on Hemispheric Affairs