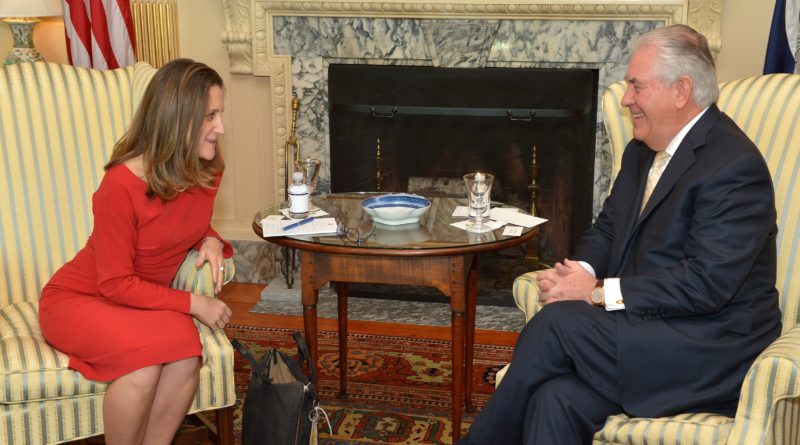 Upcoming trade talks concerning the renegotiation of the North American Free Trade Agreement (NAFTA) are expected to take place between August 16 and 20 in Washington, D.C. One of Trump’s key election promises was to “re-deal” the 23-year-old trade agreement, calling it “the worst trade deal” ever signed by the United States.[i] Meanwhile in Canada, Foreign Affairs Minister Chrystia Freeland is “anteing-up” the Canadian side of the bargain. Freeland is creating a special advisory council on all aspects of trilateral agreement concerning the United States and Mexico.[ii] Freeland is determined to take a firm stance on “defending Canada’s national interest,” as stated on July 17, 2017 by Global Affairs Canada.[iii] Although Canada is open to the opportunity to “modernize” NAFTA, The Canadian Press reported that Global Affairs Canada is also determined to “protect and promote Canada’s interest in the NAFTA negotiations.”[iv] When facing a volatile U.S. administration, the “Canada First” approach should tread lightly or face a lose-lose situation for corporations at best. At worst, it would face retaliation from the Trump administration, possibly escalating into an all-out trade war. Despite the nationalistic sentiment to promote each country’s respective “interests,” whatever they may be, the real losers of NAFTA’s termination would be the corporate elite. If Canada backed-out of NAFTA, reverting to the WTO’s most favored nation tariff rates, additional costs would only amount to USD $4.1 billion, a mere 1.47 percent of Canada’s total exports; having a modest impact on the Canadian economy, but by no mean catastrophic.[v] NAFTA is largely comprised of non-trade elements – such as Intellectual Property Rights and Investor State Dispute clauses – aimed at supporting extraneous de-regulation in the interests of increasing corporate profits. At the upcoming Washington trade talks, Minister Freeland must stand strong in negotiations with the U.S. Chief NAFTA negotiator, John Melle — promoting the interests of all Canadians, not just the corporate few.