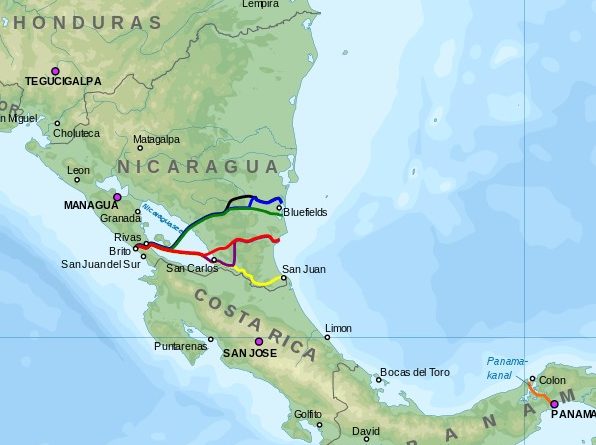 By Edwin Nieves, Research Associate at the Council on Hemispheric Affairs

On July 7th 2014, the Hong Kong Nicaragua Development Group (HKND) announced the approval of a plan to build a canal linking the Pacific and Atlantic Oceans through Nicaragua, roughly one hundred years after the United States completed the Panama Canal[1]. The Nicaraguan enterprise would be the largest civil engineering feat in human history: wider, deeper, and longer than its Panamanian counterpart. “There has been no civil engineering project of this magnitude – ever”[2] claims Bill Wild, chief project adviser to HKND Group. This ambitious plan was projected to cost an estimated $50 billion USD and take five years to build[3]. The HKND broke ground to much fanfare in December 2014 near the mouth of the Brito River in western Nicaragua, with a plan to finish the project in 2020[4]. After over a year of delays, the contentious canal project will resume in August of 2016[5] with an unspecified completion date.

The HKND Group officially claimed that they were waiting for a critical environmental impact report before they undertook construction[6]. The British Environmental Resource Management (ERM) Ltd., the world’s leading sustainability consultancy, was contracted by HKND to prepare this study in accordance with Nicaraguan law[7]. The report stated that the Nicaragua Canal’s commercial potential is considerable, but that its environmental impact would also be significant[8].

The fears of rural Nicaraguans, indigenous peoples, and the environmentally conscious were validated by the environmental impact assessment. The canal’s construction and the supporting infrastructure will destroy almost 1 million of Nicaragua’s 7.9 million acres of rainforest and wetlands[9]. The canal will also cross through Lake Nicaragua, which provides fresh drinking water for a majority of Nicaraguans[10]. Furthermore, Nicaragua is situated in the middle of a hurricane belt, meaning that the Nicaragua Canal will be exposed to physical stresses beyond those that currently afflict the Panama Canal. Bob Stallard, a hydrology expert with the U.S. Geological Survey, who has studied the effect of storms on the Panama Canal for 30 years told Yale Environment 360 that “Nicaragua has experienced at least four Class 4 or greater hurricanes since 1855…The cost of fixing damage [to the canal] could be as much as building the thing in the first place.”[11] Hurricane rains and winds could cause floods and landslides, which could break the canal’s locks and damage local towns and infrastructure.

These environmental consequences are compounded by potential human impact. This project potentially would displace a minimum of 30,000 Nicaraguans and an unknown number of indigenous peoples[12], almost surely extinguishing their traditional way of life. The canal project would certainly cut through the lands of the Rama and Kriol peoples whose lands are still inaccessible by road[13]. Nicaraguan farmers who live in the region surrounding Lake Nicaragua and depend on the lake for their survival also protest the canal project[14], claiming the former revolutionary-turned politician President Ortega betrayed them and sold their country to a foreign company. They worry (not without reason) that the canal will pollute the lake and make it impossible for them to stay in their ancestral homes. This concern is echoed in many small towns throughout the country. Experts told the New York Times “that Mr. Wang will have to pay only the assessed value, or about 5 percent of the market value, for any lands he takes”[15]. While the Times also reports that Mr. KW Pang, executive vice president of HKND, said that HKND will pay market value for the land it wants even though it is not obligated to[16]. This situation is complicated further by the status of indigenous peoples who (According to the Nicaraguan Constitution of 1987) own their land and are autonomous[17]. It is unclear how these peoples would be paid for their land how its value would even be determined. Speculation runs rampant as Nicaraguan property owners in the area report harsh crackdowns by the Nicaraguan police[18]. These events reinforce the fears they have for the future of their security of their homes and livelihoods.

However, HKND and the Nicaraguan government demonstrate optimism that these effects can be offset by the benefits of the canal. Some of the exports from Latin America to China are commodities which are transferred in ships too large for the pre-expansion Panama Canal. According to the HKND’s own website, many Brazilian ships and other commodity exports from the eastern side of Latin America would benefit from the Nicaraguan Canal because they would no longer have to circle the Cape Horn[19]. The size of the Nicaragua Canal would allow tanker ships too large for the Panama Canal to pass, thereby cutting costs and carbon emissions from the mammoth ships[20]. The decrease in costs would keep Latin American commodities competitively priced, and the decrease in travel times would decrease greenhouse gas emissions. Moreover, HKND promises to use some of the revenue generated by the canal, which would be considerable, to fund other environmentally conscious measures such as reforestation efforts and rainforest conservation in Nicaragua. Bill Wild said HKND Group plans “a massive amount of reforestation generally throughout the corridor of the canal”[21].  The Environmental Impact Assessment prepared by ERM also highlighted the need for research and spending on reforestation and conservation in the area[22]. Nicaragua has been facing deforestation and environmental degradation for years, and resources from this engineering project could be used to slow or stop this.

The Nicaraguan government forecasts that the canal project would create 50,000 jobs[23], and its upkeep would support an even larger number of them as well as provide funds for infrastructure and community improvement. Ownership of the canal would also transfer in stages from the Chinese company to the government of Nicaragua[24]. Upon completion the canal, the government of Nicaragua would receive a 1 percent stake in the consortium which would increase by ten percent each decade. The fees collected from ships crossing through the canal (like those exacted from ships crossing through Panama’s canal) could be used for social projects to help the Nicaraguan people.

Yet these positive messages come with caveats. While the Nicaragua canal would allow ships too large for the expanded Panama Canal to pass through, these ships are a minority. Few ports are even capable of hosting the behemoths. This small minority of ships does not justify the production of a canal to accommodate them and their tolls alone could not provide a return on HKND’s investment[25]. Fees for using the new canal at all would have to be low in order to draw sea traffic from the Panama Canal yet would still have to be high enough to return an investment. While money from the canal could benefit the Nicaraguan people, the government would only control fifty percent of the canal and HKND has exacted other tax concessions from the government even if the canal is never built[26]. The cost to the Nicaraguan people and environment would be immediate but the reward would be slow in coming.

Opinions on the canal vary widely depending on the source. Official polls carried out by the Nicaraguan government say the canal had an 81 percent approval rate while a Cid Gallup poll reported that 34 percent of respondents thought the canal project was pure propaganda[27]. This debate between the rural environmental interests and the government business partnership (which was hardly settled when the canal project was approved in December of 2014) has been granted respite. Although the official reason for the delay in the construction was the forthcoming environmental impact assessment, the enigmatic Chinese billionaire behind the canal project, Wang Jing, lost 85 percent of his ten billion USD personal fortune when the Chinese stock market crashed in November and December of 2015[28]. He had promised to provide the initial seed money for the project from his own considerable wealth and make up the deficit by assembling a cohort of investors who could help bring the project to fruition. Bloomberg Business quoted an interview with HKND vice president KW Pang who countered these concerns: “Many businessmen from Latin America, China and Europe have come to talk with us,” Pang said. “The project’s financing does not depend on the state of the stock market in China. It is an international project. Funding will come from many countries and many investment sectors.”[29] The HKND is not being funded by either the Chinese Export Import Bank or any other state source directly[30], meaning that the project cannot necessarily rely on the Chinese government to replace Wang Jing’s initial seed money. Although China has paid for considerable infrastructure projects in the Western Hemisphere over the last decade, Nicaragua has kept up strong relations with Taiwan[31], which could complicate its relationship with Beijing. The HKND has maintained that the project will still move forward[32], but there is little evidence to support this claim besides two ditches dug at the mouth of the Brito River.

At present, the future of the canal project is uncertain. On March 15th, 20,000 people signed a petition asking the Nicaraguan legislature to repeal the law which allows the canal project[33]. Those who fear the environmental impact of the canal are still worried that when the project resumes it will exact a terrible toll on Nicaragua’s environment. However, the Nicaraguan environment is deteriorating anyway and the canal could control the inevitable. Those who want the canal to succeed are anxious because they need a return on their investment, and President Ortega has promised economic relief to a country which has struggled to get back on its feet. Yet the economic viability of this canal project remains in question. Both Wang Jing and President Ortega stand to lose if the project is called off, given the huge financial losses and the humiliation of failure. Much like Shakespeare’s Macbeth, HKND Group and President Ortega seem to have reached a point in which to progress or retreat would be equally painful Nicaragua needs to make a change to improve its economy and protect its environment; but it remains to be seen if the canal project will be that change.

By Edwin Nieves, Research Associate at the Council on Hemispheric Affairs

[9] Smithsonian.org “A New Canal Through Central American Could Have Devastating Consequences” Link

[10] Smithsonian.org “A New Canal Through Central American Could Have Devastating Consequences” Link

[28] Bloomberg Technology. The Chinese Billionaire Has Lost More Than Glasenberg in 2015. Link