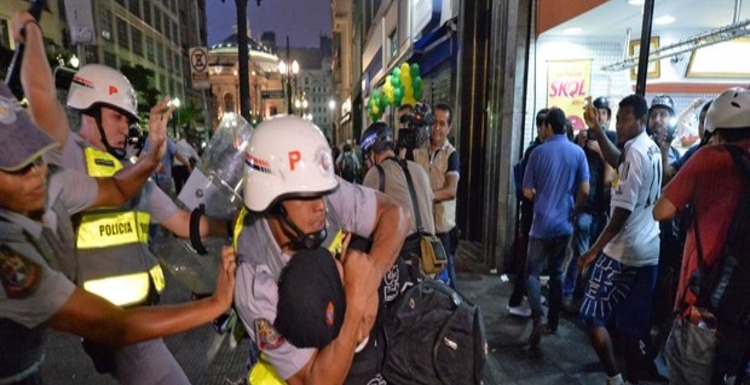 On February 6, a Brazilian cameraman, Santiago Andrade, suffered a lethal blow to the head while protesting against a nine percent bus fare hike in Rio de Janeiro.[1] Andrade had spent four days in an ICU after being hit by a lit firecracker that was set off by a protestor during the demonstration. Andrade later died on February 10. A large share of the Brazilian media has portrayed this fatality as the first death resulting from the demonstrations that began in the country back in June 2013. However, other citizens died as a result of the turbulence and the violent police repression even before Andrade’s fatality had occurred.[2] For example, a street cleaner named Cleonice Vieira de Moraes, from the state of Pará, died of a heart attack hours after inhaling tear gas which the military police used to contain street disturbances.

The emphasis on Andrade’s case and the relative amnesia regarding questions surrounding the deaths is not a simple coincidence. Incidents that directly involve media staff are more likely to be brought to light as they can jeopardize rights such as freedom of expression and information. On June 13 a reporter from the major newspaper Folha de Sao Paulo, Giuliana Vallone, was shot in the eye with a rubber bullet by military police officers. This case also received an ample amount of coverage among the national and international media. Additionally, it is alleged that such media coverage helped to change the narrative surrounding the true nature of the protests and the repression exercised by the military, which until then had largely been overlooked.

Another reason for the media’s emphasis on the cameraman’s death is the political significance attached to the killing. With the World Cup and the presidential elections approaching (in June and October respectively), the nation’s Congress is trying to assuage the public outrage following Andrade’s death in order to fast-track an anti-terrorism law. For the politicians in favor of the legislation, approving it would not only create an instrument to undermine and repress new protests on the streets, but it would also demonstrate a rapid response to the citizenry’s desire for safety; a politically fruitful proposal during an election year.

The fact that the death of the cameraman has been exploited by Deputy Marcelo Freixo, a member of the Socialist Party, exemplifies how the tragedy can be politically manipulated by special interests. Based on non-official testimonies as well as unreliable sources, some major news organizations, including the giant O Globo, reported alleged connections between the congressman and those responsible for Andrade’s death.[3] The case got international attention due to a number of inconsistencies, and culminated with the O Globo article which was confusingly titled “Intern of attorney says that activist affirmed that man who lit firecracker was related to the state deputy Marcelo Freixo.” Said article  was intensively criticized for being an example of the manipulation of information. [4]

The 2013 Senate antiterrorist law 499 is composed of short and vague articles, which ultimately will largely rely on the sometimes questionable discretion of judges to interpret it. According to José Antonio Lima, from the Brazilian newsletter Carta Capital, “a so subjective and generic definition [as the one in the law] is worrisome,” as it could be used to criminalize social movements and tend to see political parties as terrorists.[5]

The difficulty of defining terrorism and the possibility to bend the concept for political reasons is already evident even in the legislative justification of the law. In its very first paragraph, the justification states that terrorism has been understood “in different ways according to time and space,” and the term “has been managed more as a political concept than a juridical one.”[6]

Despite the various opinions over law 499, many of its supporters believe that the bill is necessary and that it represents the best possibility to prevent terrorist attacks. Senator Paulo Paim (Labor Party) argues that the law should not be looked over by a special parliamentary commission, because the application of its rules would be somehow obvious and “the wide majority [of citizens], 99 percent [is favorable].” [7] Therefore, the ruling would be simply a response to a social request, representing no self-interested political move.

The use of the word terrorism as a judicial concept is questionable in itself. All of the illicit acts presented as terrorism in the proposed legislation are already referred to in the Brazilian constitution. According to the Professor of international law of the University of São Paulo, Deisy Ventura, there is no proof that the proposed law will prevent extreme violence. [8] It seems that the law’s main objective is to spread terror within Brazilian society and avoid more anti-World Cup protests, rather than specifically solving a security problem.[9]

Regardless of the opinion concerning the necessity of an anti-terrorist law, the political use of this fast-track legislation is problematic on its own. A consolidated political and judicial system should not solely rule on delicate issues such as terrorism under an accelerated process and in the absence of essential public debate. Article five of the legislation is disturbingly composed of three words: “incite the terrorism”, without any explanation or additional text. This is a crystal clear illustration of how hastily the project was developed and points to the harmful consequences it may produce if it is misused. The priority of the government should be to enforce existent legislation, guarantee its application in accordance with the constitution, and be consistent with international human rights law.

Violence in demonstrations is not a novelty in Brazil. Apart from the governmental instructions to tighten repression on the protests, there is an intrinsic, ferocious behavior in the manner in which military police in the country conduct themselves. As stated by Paulo Vannuchi of the Inter-American Commission on Human Rights the disregard for human rights witnessed at the present time seems to be a continuation of that of the military dictatorship, which governed the country from 1964 to 1985. [10] The 2012 report of the United Nations Human Rights Council, states that the country has a rather violent military police, and suggests the Brazilian government  work towards abolishing this institution.[11] An example of its vicious approach was demonstrated from 2006 to 2010, when the Brazilian military police killed proportionally nine times more people in Brazil than police did the United States.[12] Indeed, one of the main explanations to the extraordinary number of demonstrations in June was the outrage provoked by the disproportional repressive response from the military, which utilized tear gas, rubber bullets, and spice gas against protesters and journalists. Furthermore, the use of agent provocateurs and physical aggression in protests was reported in various states throughout the country.

However, the latest focal point of parts of the Brazilian media and the government is not the military repression, but rather the violent protesters identified as “black blocs.” These individuals are characterized by their dark clothes, anarchical ideas, and a lack of leadership and organization. The black blocs’ tactics emerged in the 1980s and in recent times these groups have spread throughout the country. Allegedly, they appear only during riots, and they focus on attacking governmental and financial institutions, having no ostensible connection before and after that.[13] These groups are the most likely to be imprisoned under the aforementioned anti-terrorism legislation number 499 because they are a major concern for politicians.

In addition to the proposed law number 499, Brazil’s police forces are preparing their supplies of non-lethal instruments to suppress demonstrations, by utilizing tear and spice gases.[14] Moreover, some nascent efforts to handle rioters without using bombs and small weapons are being carried out by groups such as São Paulo´s “Martial Arts Troop” or “Ninja Squads”. On February 22, the troop made its debut against the first large demonstration in the state after Andrade’s death. According to the police, 262 people (more than a quarter of the initially estimated 1000 protesters) were dragged off to jail, including five journalists.[15]

On Thursday, March 13, a third protest against the World Cup took place in São Paulo, which involved about 1500 demonstrators and 2000 police officers.[16] So far, upwards of five protesters have been jailed, but the numbers may increase in ensuing days. Although five arrests reflect a decrease in the scale of police repression, this can be attributed to the fact that the national media and the international community are scrutinizing such developments after the previous protests were staged. Nevertheless, disregarding such public pressure, many officers were spotted walking in the streets without their police badges in public display, which represents a serious infraction against Brazilian law. According to Igor Leone, a member of the organization Activists Attorneys in Brazil, the commander of the police operations told him that the police were wearing new uniforms that had yet to have the badges attached.[17] The fourth protest against the World Cup is already scheduled to take place on March 27 in São Paulo’s famous Avenida Paulista (Paulista Avenue).[18]

The innately violent behavior of military institutions in Brazil constitutes a problem in itself regardless of the nature of the judicial system. Structural changes in their modus operandi are imperative, mainly in the face of the proposed anti-terrorism law, which has the potential to legalize extreme repressive measures. If nothing is done to address these issues, Brazilian citizens will be the ones to bear the consequences of the escalating violence from both the rioters and the security force, and eventually may cost them their fundamental right to peacefully demonstrate in support of their beliefs.

Allan Greicon, Research Associate at the Council on Hemispheric Affairs