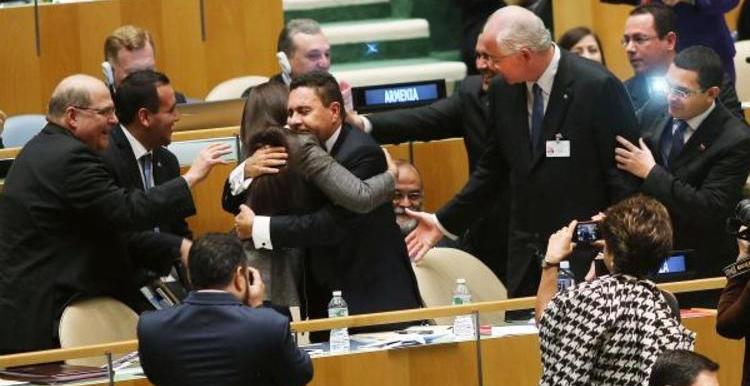 By Larry Birns, Frederick B. Mills, and Ronn Pineo

With 181 out of 193 of the United Nations representatives voting yes on Thursday, October 16, the Venezuelan government has gained not only a seat on the U.N. Security Council, but an affirmation of a leadership role in the Americas. As a result, there are now two strong features of Venezuelan foreign policy that will likely have an intensified impact on the Council: Caracas’ ongoing commitment to construct a multi-polar world, and its anticipated presidency of the Non-Aligned Movement starting next year.

Although there have been some moments of dismay over the last fifteen years with Venezuela’s evolving foreign policy, overall the nation  has advanced to a position where it draws considerable respect among other Latin American nations. Acclaim for Venezuela’s international position already has stemmed from its strong support for efforts aimed at regional integration and the establishment of the region as a “zone of peace,” as well as for its long-time championing of the inclusion of Cuba at the Summit of the Americas. These positions have matured and have now attracted near universal support in recent years by a series of new Latin American regional bodies that have been formed, most notably CELAC (The Community of Latin American and Caribbean States or Comunidad de Estados Latinoamericanos y Caribeños) and UNASUR (The Union of South American Nations or Unión de Naciones Suramericanas).  Latin American nations came together to form these new bodies with the purpose of shaping a common hemispheric vision without interference from the United States.  Indeed, the U.S. and Canada are not even members of either CELAC or UNASUR, and may not choose to join. Meanwhile, Venezuela has been a key player and gained appreciation for its participation in the peace negotiations between the FARC guerrillas (The Revolutionary Armed Forces of Colombia or Fuerzas Armadas Revolucionarias de Colombia) and the government of Colombia.

Continuing the legacy of former president Hugo Chávez, Venezuela is a leading proponent of complementarity in trade relations between regional nations. This philosophy involves finding innovative ways of exchanging goods between Latin American nations based on responding to the most urgent and rational public needs of each country. A growing diversification of trade relationships has resulted, with numerous deals also being struck between Latin American nations and China, Russia, and the European Union, trade arrangements that completely bypass the State Department.  Venezuela has also played a key role in the creation of new Latin American financial institutions, such as the Banco del Sur (Bank of the South), as alternatives to the orthodoxies of the World Bank and the International Monetary Fund.

The Obama administration refrained from open opposition to a Venezuelan seat on the Council until the vote had been taken and Washington had been humbled by the outcome. Congresswoman Ileana Ros-Lehtinen (R-FL) and other hard-line US legislators, as well as the Washington Post and the New York Times, publicly showed their irrelevance by urging the administration to thwart a Venezuelan diplomatic victory. Ros-Lehtinen, a Miami ultra-conservative, argued that the administration of President Nicolas Maduro is bent on “undermining peace and security in the region.” The truth is that unlike the US, Venezuela has not backed golpista regimes in the region and is not involved in a serious conflict anywhere. Rather than being so strained Caracas is serving as an effective mediator in peace negotiations to help bring to an end the longest running war in the hemisphere, and does not have a military base in any other Latin American nation. On the other hand, the anti-Chavista lobby in Washington, and its friends on the editorial boards of the Washington Post and New York Times, seem content to uncritically repeat the claims of the Venezuelan opposition. No doubt the Bolivarian revolution faces serious and urgent economic challenges, persistent high crime, rogue elements within some of its police units, and still battles corruption within the state bureaucracy.  Still, these challenges should be set into the political context of a determined and violent ultra-right opposition, which is set on achieving extra-constitutional regime change. And there have been important gains under Chávez and now Maduro. Over the past fifteen years, the revolution has succeeded in lifting several million Venezuelans out of poverty, increased national control over the country’s natural resources, and supported the further development of organized expressions of popular power.

Progressive forces, including COHA, may not greet with satisfaction every Venezuelan domestic and foreign policy position, and will probably continue to take issue on a selective basis with various political and economic developments.  Nevertheless, a non-permanent Venezuelan seat on the United Nations Security Council is likely to provide a sorely needed rational voice for multi-polarity and an opportunity to broaden the debate over how to resolve international conflicts while promoting world peace and allowing for the respect of authentic national interest.