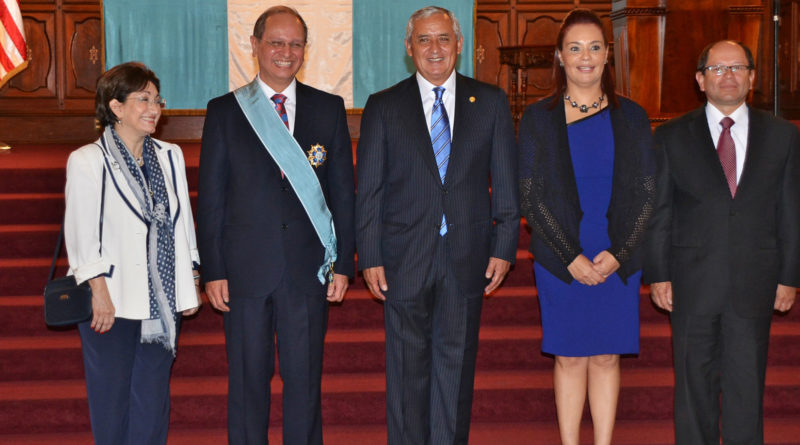 About two weeks ago, Karen Fischer, an American lawyer based in Guatemala, presented an amparo provisional (provisional suspension) to the Supreme Court of Guatemala that temporarily halted the public’s hopes to place current President Otto Pérez Molina on trial on cases of corruption. The amparo’s purpose was to stop or block the efforts of the Comisión Pesquisidora, a five-member commission chosen by the legislature investigating the corruption allegations made against the current president. Fortunately, the Corte de Constitucionalidad (Supreme Court of Guatemala; CC) voted down this measure.

Pérez Molina stated that in asking for this grace period, he was exercising his constitutional right as a citizen to defend himself.[1] He also stated that the measure was a response to declarations made by Gloria Porras, the president of the CC, which indicated that the court had decided on an amparo provisional in favor of the president. The President said he felt obligated to present his own request for the amparo because of the accusations that have been made against him.[2] Filed on June 27, this amparo was the second one to be presented in favor of the president with the first submitted by Fischer.

Gloria Porras was one of the three judges to vote against the measure. She released a statement to the press declaring, “The circumstances are not favorable.” As a result, she voted the request down.[3] The Comisión Pesquisidora can now resume its work in deciding whether or not to recommend that President Pérez Molina be stripped of his immunity before his term ends, a date that is quickly approaching. The court’s decision has delivered a sigh of relief for many Guatemalan citizens who are pleased to see the CC taking a firm stand against corruption alongside them. Many fear that if Pérez Molina is not charged before his term is up, he will escape to another country such as Panama in order to avoid being tried for his alleged crimes. The CC of Guatemala also voted against the amparo provisional to stop reforms in Congress presented by the lawyer Flaminio Bonilla. Porras said the proposal by Bonilla is a very complicated matter that needs further analysis.

With the current president under attack and the Congressional reform boasting public support, left-wing political parties have united for this election, hoping to bring about lasting change in the government. The union of left-wing political parties called Unidad Revolucionaria Nacional Guatemalteca (Guatemalan National Revolutionary Unit) and WINAQ, a political party founded in the indigenous communities of Guatemala have brought hope back to a number of Guatemalan communities because they represent a breath of fresh air among traditionally corrupt political parties.[5] Although not completely unified, the left-wing groups are striving for one common aspiration and share a vision for class struggle and equality. Congressman Amílcar de Jesús Pop Ac, head of the WINAQ party and the one of those responsible for corruption allegations against President Pérez Molina, said that their struggle has not been easy, because they are standing up against the powerful forces of mercantilism in the country represented by corporate interest as well as traditional political parties that currently control the electoral process.[6] Pop blames the wealthy few who zealously guard their interests and harbor power, but these independent parties have been able to catch the attention of los pueblos, or lower segments of the population.

The union of left-wing parties has sparked hope amongst the general public, but so have the actions of the CC, which has acted with vigor against efforts to impede justice. As a result of voting against the requested amparo, the passage of the Reforma a la ley Electoral y de Partidos Políticos in Congress and the corruption investigations against President Pérez Molina continue on schedule after a momentary standstill that only served to anger the population even more. Amidst the constant onslaught of corruption scandals, the stance taken by the CC has appeared to represente a win for the Guatemalan people.