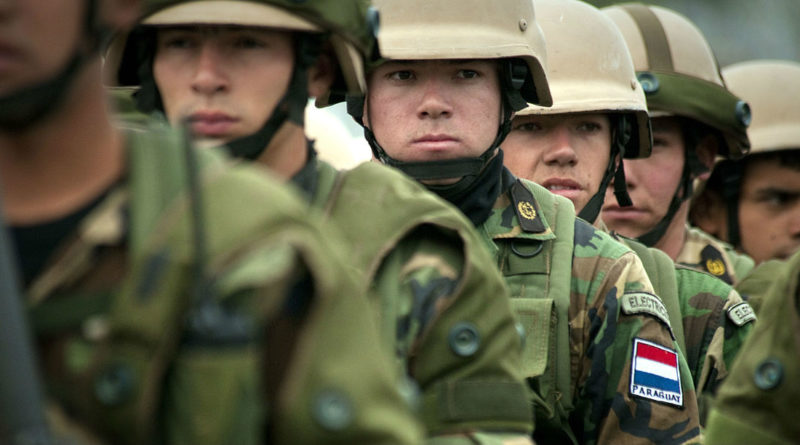 Since the end of the Stroessner dictatorship in 1989, Paraguay has struggled in its efforts to reform its weak institutional structures. Systemic corruption, growing poverty, and media censorship have all contributed to the perpetuation of the country’s stagnation over the years. Paraguay’s consistent failure to institute comprehensive land reform has even contributed to the rise of a local guerrilla movement that has not been neutralized by a corrupt military. While President Horacio Cartes has acknowledged the existence of corruption within the national police and military, many of Paraguay’s structural problems remain mercilessly neglected.

Soybeans cover three quarters of all farmable land in the Paraguay.[1] The majority of the Paraguayan population is rural and over a quarter of the country’s labor force is involved in agriculture. This does not include the large number of Paraguayans who are engaged in subsistence farming. However, 85% of the soy covering Paraguay is inedible and only intended for industrial use.[2] As industrial farms continue to expand in response to increases in global demand, local farmers are finding themselves under pressure. High profit margins and low taxes on soy exports continue to encourage companies and foreign investors to buy the land of local farmers who find it harder and harder to produce food for their own consumption.[3]

The United States Food and Drug Administration reports that 95% of cultivated soy plants come from genetically engineered varieties.[4] The most prevalent strain is Monsanto’s “Round-Up Ready” brand. This type of soy can be indiscriminately sprayed with the potent Monsanto pesticide “Round-Up” to eliminate competing and diseased plants.[5] Periodic saturation with pesticides also kills nearby crops grown by farmers to feed themselves and their livestock. With the companies using this seed to spread out and with larger numbers of rural farmers being displaced, land reform has become the biggest election issue in 21st century Paraguay. However, some rural Paraguayans have refused to wait for government action. Conflicts between campesinos and landowners have been occurring at a quickening pace since the turn of the century.

Incidents are increasing with private guards and police forcibly removing farmers who refuse to vacate lands claimed by corporate entities.[6] Self proclaimed “peasants without land” have also attacked estates and other resources belonging to foreign landowners.[7] In addition to corporations, foreign immigrants bought inexpensive land under the Stroessner dictatorship and developed it into profitable farmland. However, peasants displaced by corporate expansion are now demanding access to land from these foreign landowners and corporate holdings. Over the years these conflicts have escalated into violent confrontations with no clear solution in sight. Former president Fernando Lugo’s attempts to placate the peasants and President Horacio Cartes’ strong-arm approach have both failed to resolve the situation.

The Marxist-Leninist Paraguayan People’s Army’s (EPP) origins trace back to 1992. Since then, the rebel group has waged an armed conflict against soybean barons and a negligent Paraguayan state. The EPP has operated freely throughout northern Paraguay since 2004, after the kidnap and murder of Cecilia Cubas, the daughter of former President Raul Cubas.[8] EPP rebels have funded their operations by collecting ransoms earned from high profile kidnappings, and by extorting a “revolutionary tax” from local farmers and drug traffickers under the guerrilla group’s ideological pretense.[9] Since 2008, the EPP has claimed the lives of three military officials, 13 police officers, and 26 civilians.[10] Edelio Morínigo, a police officer, was kidnapped on July 15, 2014 and is one of two current EPP hostages.[11]

Amidst rampant corruption by police officials throughout the country,[12] President Cartes pushed a decree through the Paraguayan Congress in August 2013 allowing for the military to be deployed against the EPP. Law 5036/13 modified the National Defense and Domestic Security Law which allowed the military to be used for internal security, reminiscent of the days of dictator Alfredo Stroessner. Cartes then established the Joint Task Force (FTC), operating under the command of an army officer, to combat the EPP.[13]

To date, the FTC has not produced tangible results. Military failure in northern Paraguay is particularly troubling considering the diminutive size of the rebel group, composed of roughly 30 members.[14] In fact, the group does not represent a significant threat to citizens outside of the northern Concepción/San Pedro region, leading Paraguayans to question the presence of the military task force in the area.[15] In part, the FTC’s poor results are in part due to a lack of proper oversight on the part of Cartes’ administration. Former Interior Minister Rafael Filizzola has described the task force project as “a giant improvisation”, pointing to the absence of a defined budget and the FTC’s lack of experience working with the Attorney General’s office.[16] Moreover, in its desperate efforts to locate the EPP, the Joint Task Force has committed human rights violations, many of which have not been fully investigated.[17]

The FTC has also been accused of engaging in corruption and criminal activity. General Herminio Piñánez, father of former FTC bomb squad engineer Enrique Daniel Piñánez, has accused the task force of extorting local farmers and accepting bribes from drug traffickers in northern Paraguay. He has specifically referenced General Restituto Gonzalez and police Commissar Antonio Gamarra,[18] who had allegedly threatened Enrique Piñánez after he had accused the Commissar of participating in an extortion scheme in Concepción, according to the famed ABC Color.[19] Oddly enough, President Cartes had replaced both Gonzalez and Gamarra before these accusations surfaced, claiming that the officials have not produced tangible results.[20]

Recent developments have proven to be even more damning for Paraguayan military operations. On August 31, 2015, FTC spokesman and Major Jonás Ramírez revealed to a local radio station that members of the task force were leaking intelligence to the EPP.[21] Ramírez had previously claimed that the FTC’s failure in northern Paraguay had been due to a lack of funds provided by the Paraguayan government.[22] However, a U.S. embassy official in Asunción confirmed to COHA that the United States is providing training to Paraguayan military forces. This has particularly troubling implications, as the United States could be providing support to a profoundly corrupt Paraguayan institution.

Pressured by members of the PLRA, the Chamber of Deputies approved the formation of a commission in June to investigate FTC corruption amidst corruption claims.[23] Victor Rios, along with many other PLRA Chamber of Deputy members, has recently voiced his opposition to Law 5036/13 and the FTC’s activity in northern Paraguay. Members of the Colorado party have remained silent on the issue.[24] Since the approval of the commission, however, the Paraguayan government has taken no further action on the claims of General Piñánez and Major Ramírez, who now has been removed from his prior post.

Over $60 million USD have been officially channeled from Washington to Paraguay in order to address corruption in law enforcement and other public sectors.[25] Corruption, though, is not limited to specific government sectors—it seems to permeate Paraguay’s entire political system. The country has constantly suffered from corruption at all levels as a result of a lack of adequate control institutions and the domination of Stroessner’s Colorado party since his autocratic dictatorship, which ended in 1989.[26] Systemic corruption in the country has become well known internationally; the United States continues to provide economic aid to the country in hopes of reducing incentives for corrupt behavior.[27] However, these measures have largely failed, as political figures continue to freely accept narco cash and enjoy full impunity. President Cartes himself is suspected of illicit activities.[28]

Despite speculation, the possibility of the investigation of any high-profile political figures seems unlikely. A high-ranking Paraguayan national police official has revealed to COHA that members of the police lack the authority to investigate cases of political corruption within the country. This has been perpetuated due to the lack of a central intelligence agency in Paraguay until late 2014.[29] Although the country’s newly created National System of Intelligence (Sinai) represents some progress within the country, its operations will be limited to national security, particularly the threat posed by drug trafficking and the EPP.[30]

The need to investigate and reveal systemic corruption throughout the Paraguayan government has been addressed by the country’s media. However, journalists have seen their hands tied.

Silence of the Press

Journalists that report on corruption have a complicated relationship with the Paraguayan judicial system. Freedom of the press is established in the Paraguayan constitution,[31] and the country has a fairly good reputation in the eyes of the Sociedad Interamericana de Prensa and International Press Institute. Even more significantly, the Paraguayan Congress passed a freedom of information bill in December 2013, and the judicial branch has revoked the immunity granted to members of Congress who have been accused of embezzling public funds.[32]

At the same time, freedom of the press is ironically undermined by Paraguay’s own judicial system. In 2010, Paraguayan judge Carmelo Castiglioni was awarded $50,000 USD in restitution for an article by ABC Color that criticized his ruling that former President Luiz Gonzales Macchi was innocent of embezzlement.[33] The Paraguayan newspaper argued in its article that judge Castiglioni’s political sympathies clouded his judgement.[34] Judge Mirta Elena Ozuna de Cazal ruled that ABC Color should have agreed with Castiglioni’s judgment and that freedom of the press is not absolute.[35] There is a low burden of proof for cases of libel and defamation of character, which creates a culture of de facto censorship. This culture of punitive lawsuits undermines freedom of the press when it is sorely needed.

When not subjected to lawsuits, journalists reporting on corruption have suffered outright violence. El Sindicato de Periodistas del Paraguay (SPP) reports that three attempts were made on the life of radio show host Gabriel Bustamante in July of 2010, allegedly because he charged Isidro Vera (a director of Yacyreta energy company) with corruption.[36] All three attacks were carried out by Mr. Vera’s brothers in the month following the broadcast. The murders of radio hosts Tito Palma and Hugua Nandu Martin Ocampos Paez in 2007 and 2009 respectively remain unsolved, but both men were reporting on cases of corruption leading up to their deaths.[37] Although violence against journalists has decreased since Pablo Medina’s death in 2014, additional threats and attacks on journalists continue to deter investigations into corruption in Paraguay.[38]

Paraguay continues to exhibit serious structural problems as evidenced by its high levels of poverty, unequal land distribution, and guerrilla insurgency. Evidence shows that the country’s police, military, local and federal governments are all involved in a wide range of corruption. However, President Cartes has not demonstrated any political will to address the roots of Paraguay’s current problems, while officials and journalists hoping to investigate corruption have been silenced. The continued neglect of core problems by Paraguay’s government threatens its ability to govern as well as the nation’s security.

[16] In an interview with InSight Crime’s Jeremy McDermott, former Interior Minister Rafael Filizzola explained the situation, “The president does not trust the police, and has put the fight against the EPP, in the hands of the military, which answers directly to him. This is a huge error. There is no budget, while the army [has] no experience of working with the attorney general’s office. There is [an] immense rivalry between the police and the army, going back to the days of the dictatorship. The whole affair is simply a giant improvisation.” McDermott, J. (2015). See: The Paraguayan People’s Army: A new rebel group or simple bandits? (p. 10) Bogotá: Friedrich-Ebert-Stiftung (FES).

[19] Enrique Piñánez died in November 2014 as a result of the detonation of a disarmed explosive in his car—in what was officially reported as an accident: “Padre De Militar Muerto Acusa a Fuerza Conjunta.” ABC Color. 4 June 2015. Web.