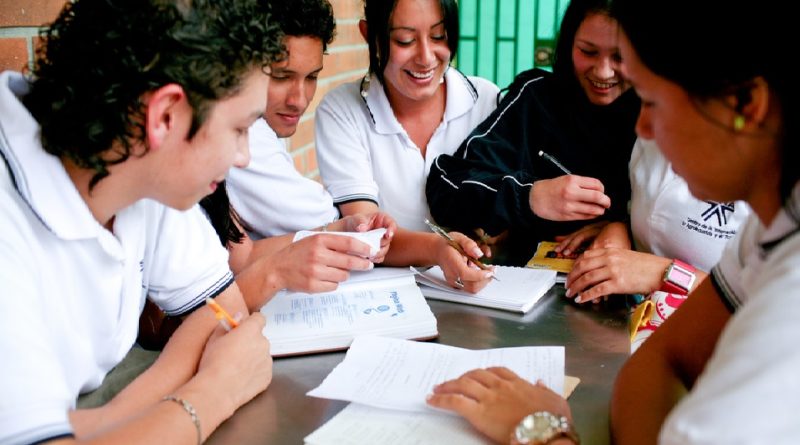 On June 6, approximately 60,000 teachers congregated in the open streets of Bogotá along with students, trade unionists from the Bogotá Telecommunications Company (ETB), and rice farmers standing by as allies. This marked the strike’s third week. Despite the government’s latest announcement that it will invest 1.18 billion pesos ($400 million USD) in the country’s education system, mediated discussions with union representatives continue, while 8 million Colombian students have missed school since May 11.[i]

The strike represents the culmination of a long-term Federación Colombiana de Trabajadores de la Educación/Colombian Federation of Education Workers (FECODE) strategy to improve public education that has involved meetings with parents and students as well as public information sessions with frequent updates on the negotiation process.[ii] Carlos Rivas, the president of the teachers’ union, expressed frustrations with President Juan Manuel Santos’ administration’s failure to meet the demands of teachers. Santos announced that the government would raise the salaries of all public sector employees by 6.75 percent this year,[iii] a relatively meager amount, especially when taking inflation rates into account.[iv] Negotiations that began in March have proven unsatisfying for teachers, who have been rallying for higher salaries, bonuses, and improved health benefits.[v] There also have been calls for improved school infrastructure and nutrition programs as well as a general decrease in class sizes.[vi]

On February 28, FECODE met with teachers to file a petition against the Ministry of Education consisting of 30 demands under seven categories: education policy, teaching career, economics, health, well-being, social benefits, and institutional needs. Eleven points were agreed upon in negotiation sessions beginning on March 8, but the remaining demands continue to be negotiated. Specifically, teachers are demanding a government subsidy of 35 percent of total annual salary for those who earn more than a million Colombian pesos (341 USD[vii]), and 50 percent for those who earn less. The Ministry of Education has proposed that all teachers should receive payments of 15 percent of their annual salary, citing an inability to pay the requested amount. [viii] Articles 356 and 357 of the Political Constitution state that the federal government is responsible for guaranteeing adequate public education funds to municipalities. Furthermore, the right to low-cost, accessible education for all is codified in Legislative Act 4 (2007) and Law 715 (2001).[ix] FECODE asserts that current poor treatment of teachers is dissuading qualified professionals from taking teaching positions and making it difficult for all students to access quality education.

On June 6, FECODE tweeted, “There isn’t more money for education but there is more for corruption. Teachers in opposition. #AdelanteProfe.”[x]

Within Colombia, disillusionment with Santos could increase should teacher demands fail to be met. Since he took office in 2012, there have been three similar strikes, with teachers repeatedly decrying the lack of transparency with the disbursement of government funds. In 2017, the government allotted 33.8 billion pesos (approximately 11.5 million USD) to education spending and 26 billion additional pesos (8.9 million USD) to specifically cover teacher salaries, loans, and health measures.[xi] According to the Ministry of Education, teachers presently make between 1,924,511 pesos and 3,120,336 pesos a month, or 658 and 1,067 USD. While cost of living varies depending on the city and region, it is estimated that in Bogotá, the average annual cost of living is around 10 million pesos (approximately 3,500 USD) and that the average resident of Bogotá spends up to 70% of his or her yearly earnings on housing, food, and transportation.[xii] Colombian teachers throughout the country are not demonstrably receiving a living wage, placing strain on themselves, their families, and the well- being of the nation and its education system.

The most recent teachers’ movement has garnered international support, with unions including the Canadian Teachers’ Federation, the German Education Union, and the Government Teacher Union of Mauritius supporting the strike.[xiii] As Colombia enters a post-peace accord era, all eyes will be on it as teachers advocate for improved education as both a right and a means to strengthen society.