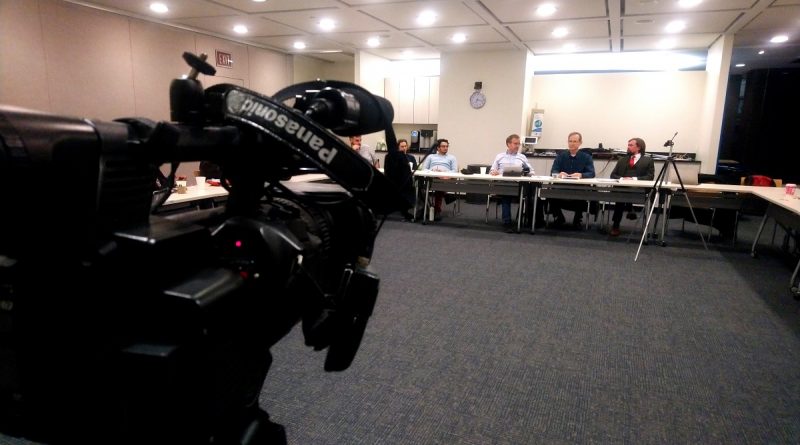 The renowned scholar, Steve Ellner gave the keynote speech at the Council of Hemispheric Affairs’ (COHA) first event of its new era on March 5th, 2019 in Washington DC, which was hosted jointly with the Center for Economic Policy and Research (CEPR). Professor Ellner has written a dozen books about Venezuela and has taught history at the Universidad de Oriente in Puerto La Cruz, Venezuela, for more than 40 years. He provided the audience with a critical ethical insight into the political and economic situation in the country and an in-depth analysis of the current US-backed coup underway against the government of President Nicolas Maduro. Also speaking at “What is behind the war on Venezuela,” was Alex Main, Director of International Policy at CEPR, and COHA’s new director, Peter Bolton, while COHA’s new deputy director, Patricio Zamorano, moderated the panel.

Ellner argued that the only possible exit to the Venezuelan crisis is based on “negotiations with no conditions” between the opposition and the Government. He also expressed concern about the distorted image of Venezuela that dominates Western corporate-owned media. He said:

The narrative coming out of Washington, DC, exaggerates and talks about Maduro as a dictator, and that narrative has not been questioned by the corporate media and by the politicians on the Hill with just a few exceptions. And that is the narrative of the opposition of Venezuela as well.

Ellner pointed out that this false narrative is so predominant that it confuses all analyses, because numerous articles are written “to try to understand how it is possible that Maduro is still in power” using theories and speculation, which lack an awareness of the real situation in the country. He stated:

Ellner furthermore pointed to the double standards of US policy. He pointed out that “the sanctions are producing great damage to the Venezuelan people.” So much so, he added, that “even Trump stated in Hanoi that ‘I am not going to increase sanctions against North Korea because those sanctions are doing a lot of harm’. He says that about North Korea, but what about Venezuela?”

You haven’t seen a campaign that demonizes a President over such an extended period of time, a president who is democratically elected, as you have seen against first President Chávez and now Maduro. This is really a first.

He warned that all this pressure and dirty campaign is so strong that even people in progressive circles are under pressure to call Maduro a dictator.

Professor Ellner also expressed the need to maintain a critical stance towards the government’s mistakes, especially in terms of economic policy, so “you don’t lose credibility” when analyzing the actual situation in the country. At the same time, however, he made clear that these mistakes must be analyzed within their proper context. For example, he noted that the monetary controls exercised on the exchange rate (the value of dollars versus bolivares), which has indeed created problems and distortions, had to be implemented in order to avoid capital flight on the part of the powerful conservative business associations – the very forces that organized and supported the 2002 coup and PDVSA oil strike of 2002-2003. All of these actions strongly hit the Venezuelan economy and in each case the government had to react to avoid further damage.

Ellner also explained how those control policies created a black market of dollars. So, he argued that “it is a valid criticism” to say that the system is not working because of such a big disparity between the official rates and the black market of dollars, and it has caused serious monetary problems. But again though, he pointed out that “you need to understand the context to comprehend the decisions made.”

He also explained that political conditions are different in the South American country:

Venezuela has been in a state of siege so to speak, practically since Chávez was elected the first time in 1998 (…) then [you had] the coup in 2002, the general strike of 2002 and 2003. Countries that are under a state of war, war and democracy are basically incompatible. We can study US history, we see that during the civil war, the accusations against Lincoln, were partly responsible for his assassination. The accusations before the public opinion, that were promoted by people who opposed the abolishment of slavery that used that and convinced a lot of people that Lincoln was practically a dictator, a demagogue. Same thing with World War I, Eugene Debs was thrown off the cliff because of his position regarding the war.

Ellner also expressed his concern about the new strategies implemented under the Trump administration that have established negative precedents for the future. He said:

What Trump is doing is really without precedent, something new in diplomacy. Obama was much more behind the scenes, much more discreet. But in the case of Trump, his top officials and his cabinet, have played an active role. Tillerson, Pence, Bolton, Abrams, they have travelled throughout Latin America. Tillerson began that through his Latin American tour when he presented the possibility of a military option.

Also, the other thing without precedence is recognizing a shadow government, it doesn’t have really history to it, and it sets a really dangerous precedent because it means that the US is doing it unilaterally, not through the United Nations, like the sanctions against South Africa that were channeled through the UN (…)The US will be always able to rely on Western Europe, on right wing governments such as those in Latin America, so in any moment the US can say ‘this government is illegitimate, we’ll recognize a shadow government, or this government is legitimate, we decide’. That is without precedent.

Professor Ellner also pointed out that the self-declared president of Venezuela Juan Guaidó is recognized by just 50 countries, which means the vast majority of nations still consider Nicolás Maduro as the legitimate president of the country.

At the end of the presentation, Ellner defended the right of Venezuelan people to decide their own future and pursue a constructive way to solve the political crisis. He said:

The bottom line is mobilization, that’s what is really going to change things. The work that we do regarding mobilization, the effort we have made along those lines has to debunk the notion that regime change is necessary, that negotiations should take place to call new elections. That is up to the Venezuelan people to decide. Our slogan should be ‘negotiations without conditions’.

On the other hand, Peter Bolton highlighted the fact that the US is only interested in supporting neoliberal agendas throughout Venezuela and the region, under the disguise of humanitarian aid, support for democracy and human rights. He brought to the discussion the situation of Honduras, were the population faces extreme violence, rampant corruption, a conservative government penetrated by the drug cartels, and electoral fraud that keeps Juan Orlando Hernández in power. He stated: “Despite all these conditions, the US continues to support the government of Honduras, with no sanctions or political pressure”. Bolton also paid tribute to the analysis of the late Larry Birns, COHA’s founder and director of over four decades, who called this double standard of US foreign policy “selective indignation.”

Alex Main from CEPR discussed the efforts his organization is making to engage with members of Congress and convey information that is not covered by the traditional media and is actively suppressed by the US foreign policy establishment. He warns that the flow of information in the US portrays a misleading situation about the human rights situation in the country and that this in turn creates conditions that make the illegal US sanctions against the country seem acceptable in congressional circles. He said:

Pretending that the sanctions help Venezuela is not accurate. It is quite the opposite, more people will suffer and die because of these illegal sanctions.

He is more optimistic, however, regarding the rejection of sanctions by a few democrats in Congress and the fact that a draft bill is now circulating to prohibit military intervention in the country. He concluded: “We need to educate them, and we need to make sure Democrats and especially Republicans understand that these sanctions go against the same values of free market they defend”.