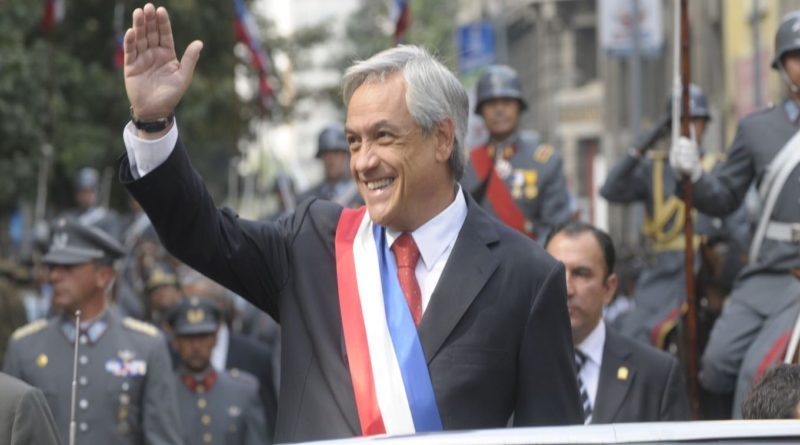 By Kristina Duran, Research Associate at the Council on Hemispheric Affairs

Michelle Bachelet is nearing the end of her second term as president of Chile. While she hones in on successfully enacting major last minute legislation, campaigns have been in full swing to elect the next president. The election will be held on Sunday November 19th. According to Chile’s constitution, if one candidate is unable to consolidate a majority of the votes, then the two leading candidates will go to a runoff set for December 17th. Currently leading the poll is former president and business billionaire, Sebastian Piñera. Following him in the polls are center-left coalition candidate Alejandro Guillier and leftist candidate Beatriz Sanchez.

Sebastian Piñera previously served as president of Chile from 2010 to 2014, this is not his first time campaigning. In fact, it is his third and by far the most conservative campaign that he has ever run. Piñera’s agenda is clearly marked by right-wing policy. When it comes to social justice issues, Piñera–a confirmed catholic– is extremely conservative. He believes that marriage should remain between a man and a women, and that abortion should be outlawed in all cases. The biggest selling point of Piñera’s campaign has been his promise to boost Chile’s economy, which has tremendously slowed down in recent years. The value of Chilean exports has decreased by 25 percent due to a declining demand for copper. This has further caused a trade fall off of revenue, a prominent part of the Chilean economy, to drop and increase the country’s fiscal deficit. In 2016, the fiscal deficit was 2.8 percent of the GDP, now it is at it’s highest since 1993, greater than 3 percent.[i]

At the end of October, Piñera released his proposed government plan, as all government candidates must do before election day. The plan involves spending 14 billion USD on over 735 measures in order to create more productive tax and pension systems as well as invest in infrastructure and hospitals.[ii] He proposed to pay for his plan by cutting government spending and increasing investment in the country by simplifying the existing tax code. In the first scheduled debate between presidential candidates that took place on September 28th, Piñera made it clear that boosting the economy would mean protecting the middle class at all costs. He told the nation,“Stand up and let’s get the Chilean economy going!”.[iii]

Despite the turmoil around his campaign, Sebastian Piñera has maintained large margins over his competitors. According to polls, he leads with about 42 percent of the vote.[iv] On September 26th, the country’s Attorney General launched an investigation of his 2009 presidential campaign, which is suspected of having financial ties to the massive mining firm Sociedad Química y Minera.[v] These are not the first allegations the billionaire businessman had to face. In the first presidential debate he was heavily criticized for the aforementioned charges and assured the public he would fully comply with the investigation. On October 31st Alberto Undurraga, Public Works Minister criticized Piñera’s government plan saying that 21 of the 735 measures Piñera plans to introduce have been completed or are already in progress under current President Michelle Bachelet.[vi] For example, the building of new airports in Santiago and Concepción, and a road connecting the cities of Concepción and Cabrero are already underway.

Following Piñera in the polls with 21 percent of the vote is center left New Majority (Nueva Mayoría) coalition candidate, Alejandro Guillier.[vii] He is a Senator for the 2nd Antofagasta District and has also had to face criticism. Throughout the campaigning process, Guillier has been attacked for not clarifying his platform. With the backing of current President Michelle Bachelet, the public knows him as a leftist candidate who plans on furthering Bachelet’s progressive agenda. However, until recently, no one knew how he planned to do this. In the first presidential debate he stated one of his foremost ideas of creating a constituent assembly to draft a new constitution for the country. This has long been an area of debate since Chile continues to use the same constitution that was implemented under the General Augusto Pinochet dictatorship. Guillier claims that a new constitution will recognize the diversity currently present in the country. Additionally, he believes that a new constitution will lead to “more participative” democracy with more transparency between politicians and the citizens of Chile.

On November 2nd, José Antonio Kast, an independent right-wing candidate, filed a complaint with the Chilean electoral authorities, stating that Guillier should be disqualified from the election because he had violated electoral law. Under article 9 of Chilean electoral law, a presidential candidate must present a government plan or proposal before election day.[viii] At the end of October, Guillier was the only candidate that had failed to present his plan. He made a statement saying that a glimpse of his plan would be made public on November 7th and the full plan would only be made available after the first rounds of the election were over. His reasoning for this was that it would allow the left to unite and create a joint program that represented all of their interests. The postponement of Guillier’s plan caused an uproar among the candidates. On November 7th, after a week of continued pressure and the day after the last presidential debate, Guillier presented a 9.75 billion USD government program.[ix] While Piñera’s proposed plan would cost nearly 5 billion USD more, Guillier’s plan also hopes to accomplish major change. Of course, the plan will continue to expand social reform and includes a focus on improving the country’s education system. Another big part of the plan is to fully implement the new tax system that was created by the current Bachelet administration. The system is predicted to to bring in about 8 billion USD and an expected economic growth rate of 3% per year.[x] In a last ditch effort to rally support against Piñera, Guiller attacked Piñera, saying that a Piñera victory would be a “threat to governability”.

As previously mentioned, the Chilean constitution requires the president elect to receive a majority of the vote. Since Piñera is expected to win around 40 percent of the vote, this leaves Guillier and other leftist candidate Beatriz Sanchez vying for second place in order to make it into the run off.

Beatriz Sanchez, another leftist candidate, has increased in popularity over the month of October. The last of all eight presidential candidates to enter the field of politics, Sanchez is best known in the country as a television-journalist. Broad Front (Frente Amplio) is a coalition of 13 parties of all different positions lead by Beatriz Sanchez with the hope of creating a political atmosphere in Chile that isn’t isolating. Among some of her plans if elected, is to annul the Amnesty Law which was enacted during the dictatorship. This law pardoned hundreds of soldiers who committed human rights violations between September of 1973 and March of 1978 from facing the courts.[xi] Sanchez’ image as a journalist earns her wide respect among the people of Chile. In the second presidential debate she gave the first two minutes of her introductory remarks to other presidential candidates who were not invited to the debate. Besides her devotion to social justice issues, she’s also adamant about implementing a system that increases taxes for the richest people in Chile. After announcing her government plan, Sanchez stated her intent of opening up conversations with Bolivian President Evo Morales to discuss the ongoing border dispute between the two countries.[xii] With days left until election day, Sanchez’ main concern is making it past the first round and then onto the run off. There have not been discussions of an alliance between Guillier and Sanchez but both have stated their intent to support any leftist candidate that makes it to a runoff with Piñera.

It is improbable that Piñera will gain the majority of the vote on November 19 in order to avoid a runoff on December 17th. While there is no denying that Beatriz Sanchez is an amicable candidate with a progressive agenda, that is not particularly far fetched, it is unlikely that she can muster enough support to overcome Alejandro Guillier. Based on polls and public sentiment, it would be extremely surprising if Guillier was not the candidate to make it to the second round.

The inevitable month long campaign between the first and second round is likely to be intense and tensions will surely run high. The only hope for the Left in Chile is if they are able to unite behind the the run-off candidate, only then does the Left have a chance at beating Piñera. Though likely to be Guillier, the left must be prepared to give Sanchez unrequited support in the final election poll. Divisions within the left have been one of the biggest problems in this presidential election. There are eight candidates, six of which identify as being part of left and center-left parties. While many lawmakers have come together to pledge support for any leftist candidate, Carolina Goic, presidential contender of the “Christian Democratic Party” has made it known that she will not support Guillier if he is the leftist candidate that makes it into the runoff.[xiii] With the election a few days away, furthering divisions within the left will only hinder the fight to keep Piñera out of La Moneda.

A return to the right in Chile would be catastrophic. There has only been one right-wing president since the end of the Pinochet dictatorship, and it was none other than current candidate Sebastian Piñera. With a history of human rights violations and corruption in the country’s politics, electing a right wing president will carry much greater weight in Chile. Piñera’s election would also come at a time of massive social change due to President Michelle Bachelet’s wave of progressive legislation in the last year of her term. For example, within the last year, Bachelet has weakened the abortion ban, pushed for same-sex marriage and banned plastic bags in all coastal cities.[xiv] [xv] [xvi] This election is significant not only for the country itself but for Latin America’s future as a region as well. If Piñera became the next president then it would follow the political climate of the region. Hugo Chávez in Venezuela, Luis Inácio Lula da Silva in Brazil, and the Kirchner’s in Argentina were among the forbearers of the Pink Tide in Latin America. After years of leftist presidents the region has recently seen a return to more centrist and right wing policy. Viewing from the moderate left, Mauricio Macri’s presidency has been marked by a stark disdain for “Kirchnerismo”, the social ideology that drove Argentina firmly into the 21st century.[xvii] In Bolivia a referendum will keep the populist President Evo Morales from serving a fourth term. In both Brazil and Peru, more conservative governments have taken hold. During her presidency, democratically elected socialist President Bachelet has made it her mission to protect the diversity that exists within Chile. Both this devotion to social reform along with the Pink Tide era will undoubtedly come to an end with the election of Sebastian Piñera as President of Chile. Billionaire, Catholic, and conservative, Sebastian Piñera has one main goal in mind: protect the economy at all costs, if it means letting the citizens be damned.

By Kristina Duran, Research Associate at the Council on Hemispheric Affairs

[i] A Tarnished Economy Awaits the Next Chilean Leader. Stratfor Worldview. November 15, 2017. https://worldview.stratfor.com/article/tarnished-economy-awaits-next-chilean-leader