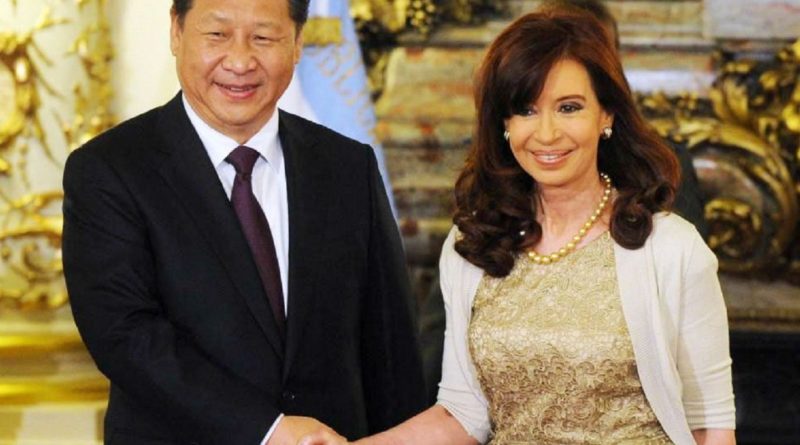 It is no secret that China’s global influence has vastly expanded in recent years. Veiled by the noise of a Trump election and the rise of populism throughout Europe, China has found itself under, particularly favorable conditions to expand its reach into Argentina. This interest in Latin America comes packaged as part of China’s larger campaign for global power, which includes military expansion, foreign direct investment, resource hoarding, and influencing international rules and norms. [i]

Between 2015 and 2019, Chinese President Xi Jinping set the ambitious goal of 500 billion USD in trade with Latin America and 250 billion USD in direct investment. [ii] The process is well underway; trade between China and countries in Latin America and the Caribbean reached 244 billion USD last year. [iii] President Xi remains steadfast in achieving his goal, with the latest development being the creation of a Chinese space station in the deserts of Patagonia.

The construction of the Chinese base for space research in Quintuco, Argentina was negotiated between the government of former Argentine President Cristina Fernandez de Kirchner (2007-2015) and the administration of President Xi. The 50-year contract was officially signed in April 2014 and was promulgated by the Argentine parliament in February 2015. The station began operating in March and, according to the New York Times, plays a pivotal role in Beijing’s bold endeavor to kick off “an expedition to the far side of the moon.” [iv]

Just weeks after the space station began operating in Patagonia, the United States made an announcement that shocked the world. The Pentagon decided to fund a 1.3 million USD emergency response center in the same province where the Chinese base is located, and as such will be the first American project in Argentina. [v]

As it currently stands, the Chinese base is one of the most striking symbols of Beijing’s long push to transform Latin America and shape its future. In many ways, it is becoming clear that such a move directly undermines the U.S. political, economic and strategic power in Argentina and the whole region. In other words, Argentina which once bent to the interests of the United States is beginning to find new allies. In fact, a spring 2017 study conducted by the Pew Research Center on Global Attitudes and Trends found that over 45 percent of Argentine citizens believe that China has a great deal of influence in their country. [vi] This trend, however, is not limited to Argentina, but exists throughout most of Latin America with the majority of Bolivians, Brazilians, Salvadoreans, Mexicans, Venezuelans, and Chileans agreeing that China has a great deal of influence in their respective countries. [vii] Given growing Chinese influence and the physical presence of its station, the tit for tat response of the United States is not surprising.

As more details about the station begin to surface, this “space race” has become an even greater cause for alarm among Washington’s diplomats. Yet, what Washington fails to understand is that this space station is only the progression of China-Latin America policy, which really took off during the 2008 crisis. While the United States. turned its back on Argentina, China saw and exploited a lucrative opportunity. In a first-of-its-kind policy paper that drew relatively little notice at the time, Beijing argued that nations in Latin America were “at a similar stage of development” as China with much to gain on both ends. [viii]

Then-President Cristina Fernández de Kirchner welcomed China with open arms since Beijing’s invitation came at the perfect time: the height of the 2008 financial crisis. Taking advantage of China’s resources helped shield Argentina from the worst of the recession. In a nation that had been shut out of international credit markets for defaulting on about $100 billion in bonds, China became a much-needed crutch.

Instead of mulling over its history of long mistakes with Latin America, the United States needs to analyze its strategy in the region, looking closely at the Chinese space station in Argentina. In particular, these negotiations are problematic because they were held in complete secrecy during a time in which the Argentine economy required foreign investment. Inflation was high, billions of dollars in debt were piling up, and no international institution trusted Argentina enough to lend it money. To make matters worse, the Argentine public was enraged with the government because of its decision to nationalize 30 billion USD in private pension funds. [ix] Then China appeared: a welcome solution to a grim outlook.

First, it struck a 10.2 billion USD currency swap deal that helped stabilize the Argentine peso and then promised to invest 10 billion USD to fix the nation’s infrastructure. [x] The catch, Beijing wanted a satellite-tracking hub on the other side of the globe, and evidently Argentina agreed. [xi] In this way, Beijing took advantage of the country’s weakness to advance its own political agenda. If China can make such secret negotiations without the intervention or ethical questioning of other countries, who is to say this hegemonic power will not continue to do so? This question is at the crux of concern which is now occupying many Washington’s policy-makers.

Additionally, an installation of this magnitude facilitates the intelligence gathering capabilities of China in the southern hemisphere.  Frank A. Rose, Assistant Secretary of State for Arms Control under the Obama Administration, says he spent much of his time worrying about China’s growing space program. [xii] “They are deploying these capabilities to blunt American military advantages, which are in many ways derived from space,” Mr. Rose asserts. [xiii]

Even though the world still cannot fully understand the implications and effects of such a station, it is clear that Beijing has changed the political, social, and economic dynamics of Argentina. [xiv] For instance, Argentine soybean exports to China have changed the country’s landscape. Since soybean accounts for most of Argentina’s exports and China is its primary buyer, soy crops have begun replacing the farming lands of La Pampa, increasing at the same time the national prices of both milk and meat. [xv] In this way, the surge of Chinese investment has hindered several industries such as dairy and cattle as dependency on China makes economic diversification unnecessary.

Although the presence of the Chinese space station in Patagonia is a cause for Washington concern, it is equally important to acknowledge that the issue is more nuanced than U.S. policymakers may want to understand. Despite long-standing U.S. concerns about unfair trade competition, China’s approach is built on multilateralism, free trade, and globalization — values that earlier U.S. administrations used to share. While China may be interested in geopolitical influence, it certainly also has many commercial objectives in the region, including promoting new export markets. According to the Inter-American Development Bank (IDB), thanks in large part to Chinese purchases of raw materials, the value of total exports of goods from the region rose by an estimated 13 percent in 2017 reaching 985 billion USD. [xvi] It cannot be denied that this commercial interest has benefited the Argentine economy in some ways.

Beyond its direct impact on the region’s economic development, China’s creation of a space station in Argentina will also have broader geopolitical implications. It’s true that the current and previous Argentine administrations have sought Chinese capital, eager to address long-standing infrastructure deficits. They have offered a number of opportunities for improving the general climate for China’s rise to hegemonic dominance on the world scene.

However, the physical presence of a space station in Argentina has caused quite a backlash. Many Argentines are worried that the station can become a military base even though China had previously promised to use it purely for civilian purposes. “People are afraid,” says Jara María Albertina, the manager at the local Argentine radio station. [xvii] In this way, the space station has brought up hidden concerns that people were keeping buried, as they continue to see Chinese influence grow in their backyards.

This fear has brought about necessary reflection, and more importantly, questioning of Beijing’s intentions. Many Argentine business owners have begun to criticize China for its extensive promotion of Chinese firms, labor, and machinery within state-to-state investment contracts as well as its lack of inadequate environment and labor protections. Other citizens wonder about the ethics of allowing China to use their state as a ploy in their ambitious rise to global political power. Hence, the space station, instead of simply becoming an icon of China’s growing ambition in Latin America, has brought about unintended consequences which can challenge Beijing’s future plans in the region.

China’s implantation of a space station in Argentina is only the first example of the far reach of Beijing’s tentacles. Although the station is a cause for concern in the United States and Latin America, it is undeniable that China’s investment in Argentina has helped in some regards such as lifting Argentina out of economic recession during the 2008 crisis. However, in other ways, it has also harmed the region economically as the diversification needed to promote long-term health has become nearly impossible due to Chinese dependency.  Given such, negative consequences of this station outweigh the positives. Indeed, this 16-story-tall satellite will require careful monitoring and ongoing dialogue on the part of Argentine politicians, many of which now have doubts about their ties to China, worried that past governments have saddled their nations with enormous debt, effectively selling out their futures. It also demands ongoing efforts by Washington to work closely with like-minded partners in the region to reinforce their support for the process of deepening democracy and economic ties in the region.

[xii] LondoÑo, Ernesto. “From a Space Station in Argentina, China Expands Its Reach in Latin America.”

[xvii] LondoÑo, Ernesto. “From a Space Station in Argentina, China Expands Its Reach in Latin America.”