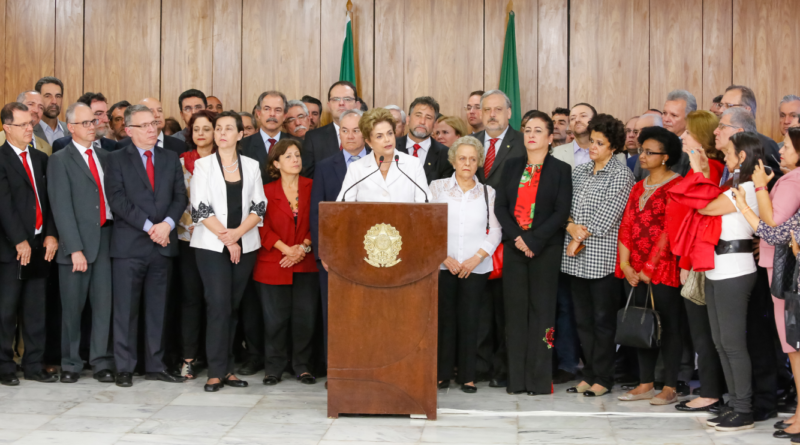 The impeachment this week of Brazilian President Dilma Rousseff represents the most significant test for Brazil’s institutions since the end of its military dictatorship in 1985. After the Senate voted Thursday to begin an impeachment trial of the country’s first female president, less than halfway through her second term in office, one politician described the events as representing the “saddest day for Brazil’s young democracy.”[1] Since the post-dictatorship transition, impeachment requests have been filed against each and every one of Brazil’s presidents, but none were carried through.[2] Rousseff, however, will be only the second president to experience an actual trial. Portrayed as a crusade against corruption, the current process against a democratically elected president rests on unclear budgetary charges and bears the mark of a right wing retaliation after 13 years of left rule.  This process is further complicated by the fact that virtually all of Brazil’s leading political figures are implicated to some degree in the corruption schemes. In the eyes of many, Brazil’s institutions seem to be failing this test and are not holding all actors equally accountable. From the outside it appears that in the young Brazilian republic, the structures of democracy are being shaken down. While the right-wing claims that Rousseff’s impeachment request is a legitimate response to budgetary malfeasance, her supporters are characterizing the efforts to impeach her as unconstitutional, and therefore a coup.

In “Behind Dilma’s Destitution, a Neoliberal Coup,” Tatiana Roque, a professor at the Federal University of Rio de Janeiro (UFRJ) described the events surrounding Rousseff’s impeachment as a “neoliberal coup.” She states: “In the putting on hold of the democratic principles and the weakening of the voting power, we foresee the appearance of a dramatically anti-democratic process.”[3] In coverage of such a complex situation, the crisis has been portrayed by the privately owned media as a movement of the people against a corrupt government, which is ultimately an inaccurate and oversimplified explanation. In light of events this past week, it is even more necessary to analyze the legal ground on which the whole illegitimate process rests and to grasp its significance for the entire region.

The push to oust Rousseff from office has been a protracted and chaotic process littered with soap opera-like developments and reversals. On Wednesday, May 11, Brazil’s Senate voted in favor 55 votes to 22, after 21 hours of tense debate, to suspend the office of President Dilma Rousseff and to begin the formal impeachment trial against her on charges of fiscal and budget responsibility crimes. The process now moved to the Senate after a series of complicated events. On April 17, the Chamber of Deputies voted to approve the continuation of the impeachment process, in a circus-like atmosphere where almost none of the Deputies directly addressed the charge backing her impeachment. The former President of the Chamber of Deputies, Eduardo Cunha, was removed earlier this week on the grounds of the obstruction of investigations in the Petrobras corruption scandal. He was replaced by Waldir Maranhão who immediately after taking office, decided to annul the April 17 decision only to then cancel the request, a mere 48 hours before the Senate was scheduled to commence and vote. In response to this wild back and forth, the highly respected former Supreme Court (STF) judge, Joaquim Barbosa, tweeted: “Do you know what the whole world must be thinking about us Brazilians? “A laughing stock’.” Amidst all this, Rousseff insists that she will continue to keep fighting until the very end. In Brasilia, while waiting for the announcement of the Senate’s decision the two sides of the makeshift wall that separated those supporting from those opposing the impeachment could not have been more contrasting. While on one side the pro-impeachment crowd dressed in yellow and green had a Carnival like celebration, those opposing the impeachment process were at certain times in the evening subjected to tear gas by the police.

Now the Senate has voted in favor of the commencement of the impeachment trial, which will be conducted in the Senate and led by the President of the Supreme Court Ricardo Lewandowski. Within 180 days and after consideration of evidence and testimonies by both the accusatory commission and Rousseff’s defense team, a verdict will be rendered: guilty or not guilty. Meanwhile, she will be suspended from office and her duties will be temporarily fulfilled by the universally unpopular Vice President Michel Temer, from the Brazilian Democratic Movement Party (PMDB). Temer, however, is himself implicated in a number of scandals, leaving his political future uncertain. He stands accused of illegal financing during the 2014 elections and also has been cited in a plea bargain regarding his alleged involvement in the Petrobras corruption scandal.[4]

The Veneer of Legitimacy

Opponents of Rousseff’s administration claim that the current impeachment followed a legal procedure: it was voted on by Congress and is a process acting on the people’s desire to remove an increasingly unpopular president. According to them, the charges behind Dilma’s impeachment request – the maneuvering of funds and tampering with budgets – are sufficient cause for her removal since such acts are illegal under the Constitution due to the Fiscal Responsibility Law. However, the case against Dilma is missing the most important component: proof that a crime of responsibility has been committed.

The right-wing of Brazilian politics, represented by different parties – the main being the Brazilian Social Democratic Party (PSDB) – and principally supported by the traditional ruling class, economic elite, and a highly concentrated national mainstream media, have been out of power at the federal level for over a decade. However, in the current political crisis, recession, and corruption scandals, this coalition sees an opportunity to take back power from Rousseff’s Workers Party (PT) that has been ruling for the past 13 years. Since the right-wing has not been able to win at the ballot box, they have stirred up yet another anti-corruption campaign to gain support from the already angered population.[5] In the midst of an economic crisis there may be enough public discontent to push for Dilma’s impeachment due to fiscal irresponsibility, even if she has not committed a crime. Yet the already complicated situation becomes more complex when one considers that many of the very same politicians fighting for Dilma’s impeachment are also accused of personal embezzlement. All parties – those in power, the left; as well as those in the right-wing opposition trying to replace the current government – are involved in some measure of corruption. Ironically, Rousseff is one of the only political leaders not accused of personal enrichment. Nearly a third of the 594 members of Congress, including the leaders of the lower house and the Senate, are under scrutiny before the courts over claims of violating laws including Eduardo Cunha (PMDB), the former President of the Chamber of Deputies, Renan Calheiros (PMDB), the President of the Senate, and Aecio Neves, the opposition’s (PSDB) leader.[6] The motivation behind the impeachment process therefore appears not to be an anti-corruption campaign, but rather the desire to instigate a political war between the right and left in an opportunistic strategy for Brazil’s political elite to regain power without votes or democratic legitimacy.

Rousseff and her government supporters argue that she has not committed any crime that justifies her removal. Under any circumstances, impeachment without proof of a crime should be considered a coup. The legal flaws in the case against Dilma make the continuation of the impeachment process an undemocratic attempt by the Brazilian elite to enter into power by overthrowing a democratically elected leader. President Rousseff was democratically elected by majority vote in 2010 and again in 2014. Given that she was thereby twice granted a democratic mandate to govern in free and fair elections, the entire process, especially now that the trial has opened, is setting a dangerous precedent in Brazilian politics. The Brazilian Constitution (enacted in 1988 after decades of rule by a military junta) defines the country as a “presidential regime” rather than a parliamentary one. In the former, impeachment is designed as an ultimate solution to remove from power a leader guilty of crime, and therefore deemed unfit to conduct the remainder of its mandate. It should by no means be confused with the more common vote of non-confidence, aiming at replacing a leader who has lost legislative support in a parliamentarian system. Simply put, these attempted impeachments are trivializing the impeachment clause process, and are eroding citizens’ faith in their own political system.

Such a situation raises concerns over the prevailing strength of Brazilian democracy. In an interview with Democracy Now! on May 10, journalist Glenn Greenwald stated,

“To sit here and witness the utter dismantling of a democracy, which is exactly what is taking place, by the richest and most powerful people in the society, using their media organs that masquerade as journalistic outlets, but which are in fact propaganda channels for a tiny number of extremely rich families, almost all of whom supported that coup and then the military dictatorship, is really disturbing and frightening to see.”[7]

No more than three years ago, Brazil’s economy was booming, its prospects improving, and in the long-term it looked as if Brazil’s goal to become a developed power in the world was close at hand. The current economic crisis has reversed this process and frustrated the Brazilian people. While approval ratings for Rousseff and her administration were once high, Brazilian voters have directed their frustration towards Dilma and the Worker’s Party due to the economic downturn. The right-wing political and economic elite have used this economic discontent on top of the nation’s largest corruption scandal to remove Dilma from office – even if there is no legitimate claim backing her removal.

With clear parallels to the 1964 coup that ousted then-President João Goulart as well as to the political crisis that led to oustings of democratically elected presidents in Paraguay and Honduras, Brazil’s ongoing impeachment process is an assault on democracy. The ousting of the current Brazilian president based on political and judicial manipulations, as well as constitutional misinterpretations, undermines the democratic legitimacy of the government but moreover calls into question the viability of Brazil’s major institutions. In its success, the precedents set for future governments are devastating not only in Brazil but in all Latin America. Brazil represents the eighth largest economy in the world, and it is a leading power in the continent.

In the first hours of his new mandate, acting President Temer promised the new government will announce austerity measures.[8] Temer has previously set eyes on Paulo Leme, the chairman of Goldman Sachs in Brazil, to potentially serve as finance minister or central bank chief. Temer also is considering Luiz Fernando Figueiredo, a previous central bank official and founder and CEO of asset manager Mauá Capital, to be Treasury secretary for the central bank. They have been consulted for the drafting of “A bridge to the Future”, the PMDB economic plan.[9]

The right wing takeover of the government in Brazil will likely have momentous consequences for the integrity of UNASUR as a bastion of independence from U.S. hegemony in the region. Combined with the neoliberal stance of President Macri in Argentina, we can expect a concerted effort by this conservative wave to drive MERCOSUR in to the free trade camp, isolate Venezuela, and undermine the Bolivarian cause in Bolivia and throughout the region. But just as Macri appears to be overplaying his hand in provoking popular outrage, the right in Brazil may soon find itself faced with an eroding, ephemeral legitimacy.

[2]  Nolte Detlef, and Llanos Mariana. “The Many Faces of Latin American Presidentialism.” GIGA Focus Latin America, May 2016. Accessed May 11, 2016. https://www.academia.edu/25159273/The_Many_Faces_of_Latin_American_Presidentialism