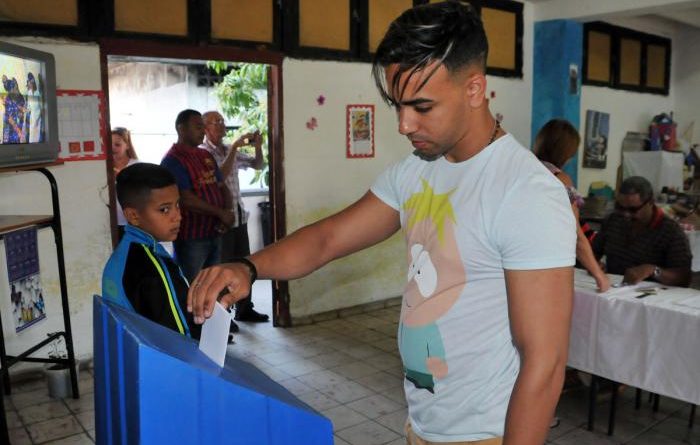 On February 24, 2019, over 7.8 million Cubans voted in the country’s constitutional referendum. Of the Cubans who voted, 86.85% voted “YES” to the new constitution, with only 9% voting “No.” This was an important advance, using democratic procedures that invited vigorous and open debate, for the process of Cuba’s constitutional reform and for meeting the political and economic challenges facing this Caribbean nation.

The need for a new Constitution

Since the triumph of the Cuban revolution on January 1, 1959, Cuba has been working towards building a country and government which recognizes the rights of every human being to shelter, jobs, healthcare, education, human dignity, and equality. Cuba is different from other socialist projects which have come before or after it. It has not followed a cookbook recipe or copied another country’s exact methods. This has meant developing a unique vision and transforming the legal and political system all the way to its foundation – the country’s Constitution. First, in February 1959, they passed what Cuba called “the Foundational Law,” until they were able to formally write and vote on a new Constitution on February 24, 1976. Over the last year, the people of Cuba have been discussing and debating their new Constitution, which was passed by referendum on February 24, 2019.

Cuban journalist Vivian Bustamante Molina outlines the participatory process undergone across the country in the lead up to the Constitutional Referendum, “The approval of the new Constitution was preceded by a three-month process of consultation with the people, in what has been described as a genuine expression of the democratic and participatory nature of Cuba’s socialist system.”

Bustamante Molina further explains, “The [New Constitution’s] text was enriched with opinions expressed during 133,681 meetings held in neighbourhoods, workplaces, secondary schools, and universities. These proposals were all evaluated and led to changes in almost 60% of the proposed articles, including those regarding the country’s political and economic foundations; rights and responsibilities; and the structure of the State, among other important issues.”

Regarding the consultation process, Ulises Guilarte de Nacimiento, the Secretary General of the Cuban Workers’ Federation (CTC), explained to Granma International News, “During the popular consultation process on the new Constitution, workers made their contribution to ensure that the rights of the working class, indispensable in the economic and social life of the nation, are upheld.” This process is one of the reasons so many Cubans participated in the vote, and why so many turned out for the “Yes.”

What’s new about the new Constitution?

Overall the new Constitution includes firstly, some new economic openings regarding private property and foreign investment while maintaining Cuba’s commitment to a planned economy and socialism, as well as free universal healthcare and education systems. Secondly, some political changes regarding the structure of the national, provincial and municipal governments and term length for presidents, as well as the creation of the position of Prime Minister. Thirdly, the Constitution makes some legal and social changes, for example: the presumption of innocence within the legal system; a ban on discrimination based on sexuality and gender identity; and a provision that leaves for future determination specific language that would redefine marriage without sexual or gender identity discrimination.

Throughout the three months of community meetings outlined by Bustamante Molina, many of the Constitution’s articles were debated and contested. Some of the main points raised are in a Spanish infographic we are reprinting from CubaDebate News in this article. 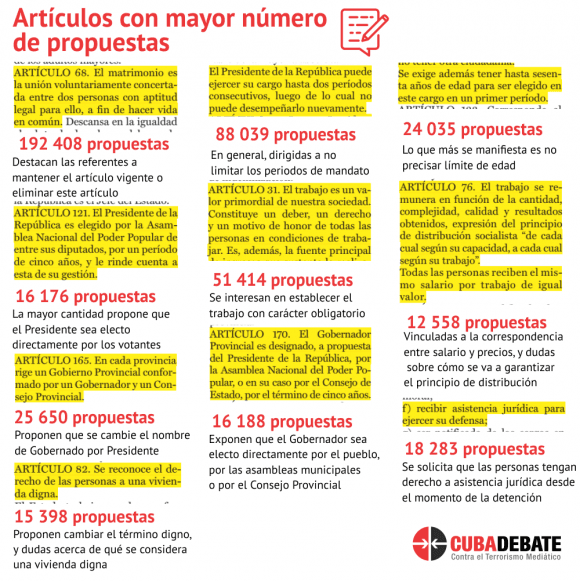 Here are three examples of articles that were often discussed in community meetings:

1) Article 121, on the election of the president by the National Assembly of people’s power, 16,176 opinions were expressed, mostly asking for the president to be elected directly by voters.

2) More than 182, 000 opinions were shared regarding the right to legal counsel. Making the right to a lawyer be explicitly from the moment of the arrest was the main proposal.

3) Article 68, on the theme of same-sex marriage and opening marriage to any couple no matter their gender, received 192,408 opinions, mostly asking to eliminate this article or to maintain the definition of marriage from the 1975 constitution as being between a man and a woman.

Not surprisingly, the push to open the definition of marriage in Cuba was strongly opposed by many churches in Cuba and international religious institutions. They organized a campaign in Cuba and on social media against the rights of LGBTQ+ people to marry. This became one of the most contested articles in the new constitution and threatened to derail the referendum – turning it into a vote for or against same-sex marriage, to the detriment of all other themes and issues.
While Cuba has made important strides in promoting lesbian, gay, bisexual, and trans rights, many anecdotal reports have suggested there was a very clear rural/urban divide on this question. The final version of the new Constitution which was voted on in the referendum removes any definition of marriage, thus opening the door to same-sex marriage in the future. The Constitution says the definition of marriage will be further discussed when Cuba sets out to update its Family Code in the next two years through a “popular consultation process” and “referendum.” Again, regardless of controversy, in the end, the mass discourse and consultations have the last word in Cuban popular socialist democracy.

Of course, it is very contentious to have a national referendum on what is a fundamental human right. For example, the right of black people to vote in the United States, or Indigenous people in Canada may not have passed if the governments had held referendums in the 1950s or 60s. The same goes for same-sex marriage when it was passed into law in Canada in 2005. Rights should not be granted or taken away based on what the majority of society thinks, they are rights and should be irrevocable. All human beings should be recognized equally by the laws governing their society.

At the same time, Cuba is in a difficult position. Cuba’s revolutionary government seeks a sort of consensus in pushing forward its socialist project. It seeks the active participation of all people in politics and society. Some considered pushing forward with explicit recognition of the right to same-sex marriage without building wider understanding and support could undermine the constitutional reform process. In particular, it could have opened a space for enemies of the Cuban revolution to sow further division in society, which was seen over the summer in the messages being sent from anti-LGBTQ+ churches and religious groups in the U.S. aimed at Cuba.

In an article titled, “The reasons behind my vote” President of the Advisory Council of the Cuban Minister of Culture, Graziella Pogolotti takes aim at those who are against same-sex marriage in Cuba. She writes that Cuba’s Constitution must, “condemn all forms of discrimination based on race, ethnic origin, social origin, gender, disability, and sexual orientation.” Pogolotti further explains why she will vote yes to the new constitution: “The concept of family is updated by recognizing its diversity of forms and manners of the constitution. It legitimizes an existing reality with longstanding roots, but hidden under the cloak of hypocrisy, a source of lacerating prejudices inherited from the darkest area of our cultural tradition.”

Results of the Constitutional referendum – A great victory

On February 24, 2019, as he went to vote in the referendum, Cuban President Miguel Díaz Canal made some comments to reporters. Díaz Canal said, “I am convinced that the majority of Cubans will vote Yes for Cuba, for the Revolution and the future, because this Constitution dignifies and extols the values of the Cuban people, the legacy of Martí, of Fidel, of Raúl; it is a Constitution that extends the rights of all, that formulates a socialist state of law; it is an advanced, modern Constitution that will allow us to untangle processes and move forward in a more determined manner.” Díaz Canal further stated, “The better world to which we all aspire is not with neoliberalism. It is with socialism, which we must continue to perfect, and seek a better economic response to problems, because, socially, it has already shown that it is more just.”

Of the Cubans who voted, 86.85% voted “YES” to the Constitution, with only 9% voting “No.” Voter turnout in Cuba for the referendum was also very high, 90.15%. To put this in a comparative context, in the 2016 Presidential election U.S. voter turnout was 61.4%, and in 2015, Canada’s was 68.3%. The participation of the overwhelming majority of Cuban people in this process indicates not only a desire for constitutional reform, but that there is a significant measure of confidence in the process and procedures.

Despite the clear statistics and the triumph of Cuba’s referendum U.S. Secretary of State, Mike Pompeo, decided to make a statement slandering the decision of over 7.8 million Cubans.

Pompeo stated, “On February 24, the Cuban communist regime held what it called a ‘national referendum’ on revisions to its constitution. No one should be fooled by this exercise, which achieves little beyond perpetuating the pretext for the regime’s one-party dictatorship. […] The United States continues to stand with Cubans who have suffered for 60 years the revolution’s failed political system and economic mismanagement. We believe that history is on the side of the brave Cuban people and that this hemisphere is a region where democracy, freedom, and human dignity reign supreme.”

While the U.S. government bashes the constitutional reform process in Cuba, alleging that it is undemocratic, it continues to support a president brought to power by fraud in Honduras and a right-wing coup against the democratically elected government in Venezuela. And while it claims to care so much for the Cuban people, Washington stands virtually lone in the world in imposing a criminal blockade on the people of this island nation.

In an interview with CubaDebate News, Dr. Martha Prieto, vice president of the Cuban Society of Constitutional Law and professor at the University of Havana, was asked: “what values would you say distinguish this Constitution?”

Dr. Martha Prieto responded, “They are essential: human dignity, which has been reinforced and radiates throughout the text, to rights and the whole legal system; equality, also more broadly, within the recognition of diversity; the protection of personal interests, with the demand for human solidarity as a means of ensuring a person’s existence, both individually and collectively, also expressed in the protection of rights for all and in the duty for each to contribute to the development and respect of the rights of others.”

While Cuba has been suffering for more than five decades from the unjust  U.S. blockade, their economy and society are also facing many future challenges. It is only through discussion, debate, and unity that they will continue pushing forward the gains of the Cuban revolution and strengthening themselves for the road ahead. The full potential of the reforms and of Cuban socialism will not be realized, however, until Washington lifts a half century of unjust economic warfare against the island.

Tamara Hansen is the author of “5 Decades of the Cuban Revolution: The Challenges of an Unwavering Leadership” (Battle of Ideas Press, 2010) and is on the Editorial Board of the Fire This Time newspaper. Tamara has traveled to Cuba more than 15 times and has written extensively on issues related to Cuban society and politics. She lives in Vancouver, Canada.