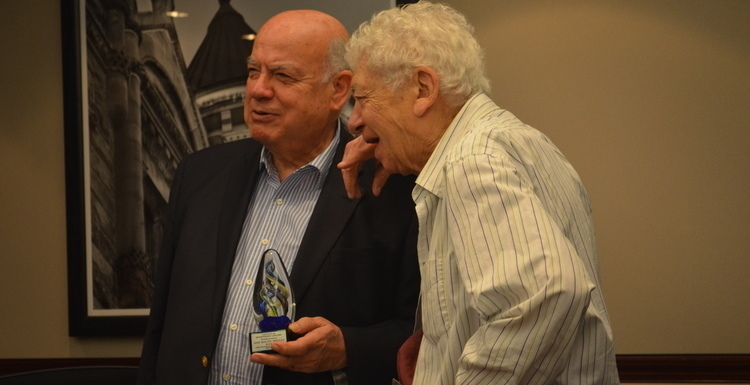 On Friday, July 11, the Secretary General of the Organization of American States (OAS), José Miguel Insulza, addressed the staff, Research Associates, and Senior Research Fellows at the Council on Hemispheric Affairs (COHA) in Washington, D.C. In recognition of his superb leadership qualities and outstanding contribution to hemispheric affairs, COHA bestowed upon the Secretary General the Kalman H. Silvert Award. Kalman H. Silvert (1921-1976) was one of the most preeminent Latin Americanists of his day. Silvert was a person with multiple talents, and was one of the founders of COHA. Silvert was also the first elected head of the Latin American Studies Association. Furthermore, Silvert held faculty positions at Dartmouth College and New York University, in addition to being a program officer at the Ford Foundation.

After receiving COHA’s Kalman H. Silvert award, Insulza spoke of Latin America’s current challenges, the successes and shortcomings of the OAS, and the need for a comprehensive U.S. policy towards Latin America and the Caribbean. Insulza began his remarks by providing some historical context for Latin America’s development. He highlighted the region’s economic and social achievements during the first decade of the 21st century, emphasizing Latin America’s growth in production. Between 2000 and 2012, “the region developed enormously,” Insulza explained. “In just 12 years, its share of the world economy grew from a little over five percent to eight percent.” While this economic development has been uneven throughout the region – Insulza noted that South America experienced greater economic growth than Central America and the Caribbean – its effects were widespread. Most significantly, economic development prompted a reduction in poverty. “[Poverty] is still there, around 26 percent,” Insulza commented, “but that’s a big improvement.” Additionally, Latin America experienced a new wave of nationalism throughout the last decade, to accompany improved standards of living.

Yet, according to the OAS Secretary General, Latin America is now embarking on a new phase in its history. While economic development has slowed in recent years, Insulza’s leadership has resulted in significant strides for the OAS, particularly regarding gender equality and human rights. Concerning the issue of women, Insulza noted that the Inter-American Commission of Women is one of the oldest bodies in the OAS. The Commission has three main goals: end violence against women; the elimination of economic discrimination based on gender; and foster equal participation in politics for men and women, both in and outside of public office. Though more work needs to be done in these areas, Insulza assured his COHA audience that the OAS has made much progress in the social sphere under his watch.

The OAS has also promoted its Inter-American Commission on Human Rights in recent years. However, Insulza noted that his efforts to encourage ethical policies have faltered, since the “human rights commission is not universal.” Some OAS member-states have not signed or ratified the Inter-American Commission on Human Rights, with the United States and Canada standing as particularly noteworthy holdouts. Another problem for the Commission is a lack of sufficient funding. Despite these setbacks, the human rights stance of the OAS sets a hopeful precedent for the region. Insulza promotes inclusive and open dialogue within the OAS, even among member-states that have not officially implemented the Commission.

Insulza sadly noted a lack of engagement and concrete policy from the United States towards Latin America in recent years. This dynamic has hindered OAS efforts to promote hemispheric cooperation and regional integration. Without the wholehearted effort of the United States, it is difficult for Latin American and Caribbean nations to find their position and fully immerse themselves in the international realm. Insulza explained that many countries do not have the resources and leverage they need to make bilateral agreements with their regional partners and with the rest of the world. Thus, the OAS cannot function at its maximum capacity without the support of all of its member-states, especially the United States. Insulza urged the U.S. government to create a “hemispheric policy that will be done with all of us, together,” in order to increase the legitimacy and the strength of the OAS.

Regardless of a lack of U.S. policy towards the Western Hemisphere, Insulza’s speech was optimistic. Insulza stated that, during his tenure as Secretary General of the OAS, “[Latin American nations] have never had more differences, but we also have never had more participation.” It seems the OAS will continue to be a relevant and successful institution, since it has effectively established an open, collaborative forum for discussion on timely issues in the Western Hemisphere. With Insulza stepping down from Secretary General of the OAS in May 2015, one can only hope that his successor will continue to inspire an atmosphere of collaboration and dialogue within the organization.