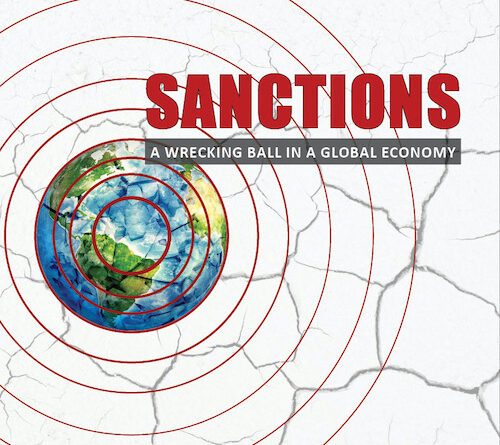 A review of the report Sanctions: A Wrecking Ball in a Global Economy, edited by Sara Flounders for the Sanctions Kill campaign and published by World View Forum.(1)

Sanctions imposed without United Nations endorsement are illegal. That is why they could be legally imposed on South Africa by a resolution of the UN General Assembly in 1962, but are unlawful when imposed by one government, often with selected allies, against any other country, for whatever reason. Known correctly as “unilateral coercive measures,” such actions are not only contrary to international law in themselves, but may lead to other breaches of the law if their effects are so severe as to become “crimes against humanity.”

The report, Sanctions: A Wrecking Ball in a Global Economy, is a comprehensive overview of sanctions on more than 40 countries, imposed by the US and in turn by many of its allies. It covers both decades-long sanctions against countries such as Cuba, longstanding trade embargoes on countries like Iran and Zimbabwe and recent sanctions against Russia and other countries resulting from the war in Ukraine. What comes through strongly is the “wrecking ball” effect on national economies, with the victims usually being the poorest citizens. Often justified on spurious “human rights” grounds, sanctions are shown by the report to have a destructive effect on the real human rights of people in places such as Iran and Venezuela.

In a chapter of the report, Ryan Swann, a researcher at the Bonn International Centre for Conflict Studies in Germany, discusses the case being brought by Venezuela against the United States in the International Criminal Court (ICC), which alleges that US sanctions are a “crime against humanity” because of the severe damage they have done to Venezuelan social programs. One of the main aims of the sanctions, and perhaps their most damaging element, is the stranglehold they put on Venezuela’s oil industry, which has such a prominent role in its economy and whose revenues fund a broad range of social services. Venezuela asserts that sanctions have devastated these services, and they are backed in their claim by a 2021 report from  UN Special Rapporteur on the negative impact of unilateral coercive measures, Elena Douhan.(2) The problem, however, as Ryan Swann concedes, is that the ICC may be reluctant to pursue a case against the United States or, if it does eventually issue a verdict, the US may simply ignore it. As he points out, Washington  has not ratified the treaty and therefore does not consider itself a party to the Rome Statute on which the ICC is based; it has acted to exempt its own citizens from ICC jurisdiction and even, for a time, imposed sanctions against ICC officials.

Venezuela’s case and the obstacles it faces in pursuing it demonstrate a wider problem about Washington’s behavior that goes beyond its use of sanctions. The Biden administration has become fond of championing what it calls the “rules-based order” internationally, a term which the New York Times has deemed vacuous, (3) as the “rules” are never clearly defined. If the US were to adhere to international law, that would put it on firmer ground, but Washington refuses (when convenient) to recognize not only the ICC but multiple international treaties and UN resolutions with which it disagrees.

An example briefly discussed in the book and also relevant to Venezuela arises from the 1961 Vienna Convention on Diplomatic Relations, which the US endorses and which grants diplomatic immunity to the representatives of sovereign governments, whether in their embassies or traveling on official business. Yet Washington completely disregards the convention in the case of Venezuelan special envoy Alex Saab, extradited to the US from Cape Verde where he had been illegally jailed during a refueling stop while  on a diplomatic mission from Venezuela to Iran.(4) Ostensibly aimed at bringing Saab to trial for what is likely to be a spurious money-laundering charge, the real reason for his kidnapping is undoubtedly that he was organizing deals which breach the US sanctions imposed on the two countries involved.

Venezuela highlights another way in which the US disregards international conventions at its own convenience. It is a widely accepted practice that states should not “prematurely” accord recognition to a head of state of a country, when the person to be recognized is not in effective control of that country’s government.(5) Yet in 2019, Washington decided to treat Juan Guaidó as the legitimate president of Venezuela, despite his never having been elected to that office. At the moment, Washington is unlikely to maintain this stance, as the opposition groups which originally supported Guaidó have announced the end of his so-called “interim government.” But the fact that Guaidó received this recognition has enabled him (for example) to seize control of Venezuela’s oil revenues held in US banks and to freeze, and perhaps gain control of, Venezuela’s gold reserves held in London.

Along with sanctions, these other actions have been held to be contrary to international law. They breach the principle of “non-intervention,” established most concretely by the International Court of Justice in its 1986 judgment against the United States and in favor of Nicaragua, resulting from the Reagan administration’s promotion of the Contra war which cost 30,000 lives. The US, of course, famously withdrew its recognition of the court ahead of the case and has never paid the compensation awarded. In the case of Venezuela, sanctions are clearly part of a regime-change operation which has involved not merely the recognition of Guaidó and his shadow government, but also US financial support for the hardline opposition which has sponsored various armed attacks against the Maduro government, all of which have proved futile. A Venezuelan lawyer based in Italy, Giuseppe Puma, who otherwise takes a conservative view of the illegality of sanctions, argues that in the case of Venezuela they are contrary to international law because they are part of a composite set of actions deliberately aimed at the overthrow of President Nicholas Maduro.(6)

Setting aside the illegality of sanctions, Rick Sterling and colleagues in another chapter of Sanctions: A Wrecking Ball criticize Washington’s argument that using sanctions is somehow a safer “alternative” to war. It is claimed that there are “humanitarian exceptions” to sanctions which prevent innocent deaths. Yet in Venezuela alone, where such exceptions are rarely if ever applied, it is estimated that extreme economic sanctions have, over the past decade, resulted in over 100,000 deaths.(7) In fact, when sanctions were imposed by the Trump administration, his national security adviser John Bolton admits urging that they would be “most effective when applied massively, swiftly and decisively.” He called for a “shock and awe” approach that would be so overwhelming that it would lead to mass popular insurrection.(8) Of course, he above all of Washington’s insiders was guilty of the error of assuming that Venezuelans (or Nicaraguans, Cubans and citizens of other sanctioned countries) welcome US intervention and are ready and willing to revolt on Washington’s behalf. This is despite ample evidence to the contrary, not least from Venezuela itself when popular action ensured that the US-inspired coup in April 2002 against Hugo Chavez was one of history’s shortest and most farcical.

Perhaps one of the most pernicious forms of sanction is when the US blocks the finances of specified firms or individuals, of which Sanctions: A Wrecking Ball tells us there are no less than 6,300 cases worldwide. Discussion by this author with individuals in Nicaragua who are on this list indicates there is no “due process” involved and the sanctions are applied with no notice. The direct effects are limited if the person has no US bank account and no plans to travel there, but can be much more serious if they are engaged in trade or government business which involves signing contracts and paying for goods and services. Such sanctions are a perfect example of how the US can claim its actions are “targeted” when in fact they do much wider damage to public services and businesses providing local employment – effects that are of course intentional, not accidental.

Sanctions: A Wrecking Ball concludes that sanctions do not have their intended outcome of forcing regime change: in fact, they usually have the opposite effect, by strengthening people’s patriotism and deepening their hostility to the sanctioning state. This does not, of course, prevent Washington from deploying them, even when their effects on the target populations are obvious and – more surprisingly – when they damage US allies or even the US itself (as with sanctions on Russia which are having severe economic effects on Europe or in the case of Cuba, Venezuela and Nicaragua, where sanctions are a major cause of increased migration to the US).  The deployment of sanctions is arguably one end of a spectrum of what Chris Hedges calls “permanent war” (9) in which the US largely avoids the massive military interventions of the past (Vietnam, Iraq) but is continually engaged in hostile action whether through proxy wars (Ukraine, Yemen), aerial bombardment (Serbia, Libya), limited wars (Syria), coups or attempted coups (Bolivia, Honduras, Nicaragua, etc.) and so-called “lawfare” (Brazil, Ecuador). A minor casualty of such wars is often the relevant local leader (Ngo Dinh Diem in Vietnam, Guaidó in Venezuela, and possibly Zelensky in Ukraine) who is lionized and later abandoned.

Washington’s deployment of sanctions sometimes garners the enthusiastic support of dissident nationals of sanctioned states, often based in the US, who join in calls for ever tougher action. For example, in the case of Nicaragua, this author has criticized prominent Nicaraguans such as Manuel Orozco of the Inter-American Dialogue, who want stronger trade sanctions. Orozco has even suggested that military pressure is needed, calling for an ambiguously named “multilateral taskforce in support of democracy.” (10) A common characteristic of many Nicaraguans who support sanctions is not only that they no longer live in the country but they are from wealthier classes whose families need not fear the effects. Their calls help legitimate demands from Washington think tanks such as the Center for Strategic and International Studies who called for a “total ban on U.S. imports from Nicaragua,” seeking to impose the same misery on the country as has already been achieved elsewhere.(11) If Biden listens to them, the expected consequences are clear. As Ajamu Baraka puts it in his chapter of Sanctions: A Wrecking Ball, the effects could be devastating: “The U.S. intends to turn Nicaragua into Haiti, Cuba into Honduras, and Venezuela… into Libya.”

Peter Beinart’s article in the New York Times concludes that the “rules-based order is a decoy.” He argues that it helps the Biden administration avoid the obvious question: “Why isn’t America defending international law?” (12) Readers of Sanctions: A Wrecking Ball in a Global Economy might conclude that even if it is reluctant to defend international law, the U.S. could at least start to obey it.

[Main image: from the cover of the report “Sanctions: A Wrecking Ball in a Global Economy”]

1. “Sanctions: A Wrecking Ball in a Global Economy,” An anthology by social justice activists. A project of the SanctionsKill Campaign. 188 pages, available at https://solidaritycenter.ourpowerbase.net/civicrm/contribute/transact?reset=1&id=17

2. “Preliminary findings of the visit to the Bolivarian Republic of Venezuela by the Special Rapporteur on the negative impact of unilateral coercive measures on the enjoyment of human rights,” https://www.ohchr.org/en/statements/2021/02/preliminary-findings-visit-bolivarian-republic-venezuela-special-rapporteur

3. “The Vacuous Phrase at the Core of Biden’s Foreign Policy,” https://www.nytimes.com/2021/06/22/opinion/biden-foreign-policy.html

6. “The principle of non-intervention in the face of the Venezuelan crisis,” http://www.qil-qdi.org/the-principle-of-non-intervention-in-the-face-of-the-venezuelan-crisis/

9. “Chris Hedges: The Democrats Are Now The War Party,” https://www.zerohedge.com/political/chris-hedges-democrats-are-now-war-party

10. “Nicaragua’s dictatorship is criminalizing democracy and fueling migration to the US,” https://thehill.com/opinion/immigration/3646934-nicaraguas-dictatorship-is-criminalizing-democracy-and-fueling-migration-to-the-us/

11. “Mapping the Escalation Ladder against the Ortega-Murillo Regime in Nicaragua,” https://www.csis.org/analysis/mapping-escalation-ladder-against-ortega-murillo-regime-nicaragua

12. “The Vacuous Phrase at the Core of Biden’s Foreign Policy,” https://www.nytimes.com/2021/06/22/opinion/biden-foreign-policy.html