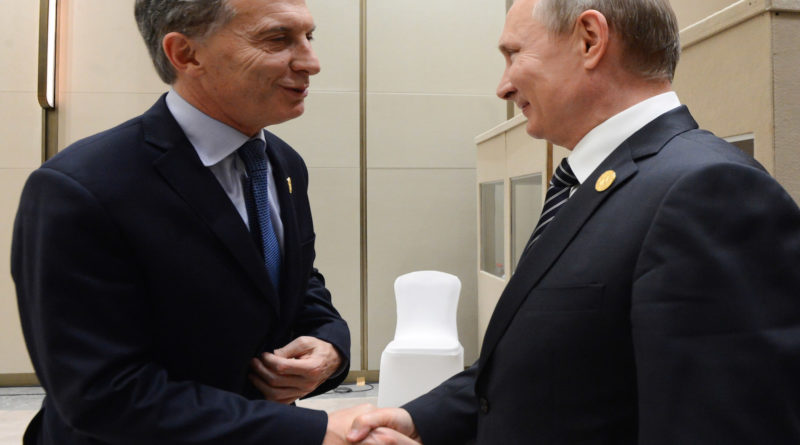 This article is based on a piece titled “Russian Engagement in Latin America: An Update” published on December 19, 2017 by the Center for Strategic and International Studies. With the author’s permission, it has been edited for compatibility with COHA’s editorial guidelines.
In the final months of 2017, the most significant advance in Russia’s relationship with Latin America was arguably the inclusion of eight Latin American teams in the 32-team field for the upcoming 2018 World Cup being staged in Russia. Nevertheless, Russia was almost absent from media coverage of the BRICS+ summit held in Xiamen in September 2017 and Vladimir Putin’s address to the APEC summit in Da Nang, Vietnam in November did not even mention Latin America. In contrast to high-profile Russian political and military initiatives in Latin America in 2008 and 2013-2014, its engagement with the region in 2017 has been uneven. But with United States leadership in the hemisphere on retreat in multiple fronts and an increasing interest by Russia and China to engage and invest in military, security and infrastructure projects in the region, Latin American relations with their Eurasian counterparts will likely change in 2018.

In contrast to Chinese activities in Latin America, Russian engagement is focused on a limited set of countries and their economic sectors, led by arms sales.  While Russia sends tourists to the Caribbean and purchases agricultural goods from the Southern Cone, businessmen and political leaders in the region simply do not dream of access to vast Russian markets, loans and investments, as they do with their Chinese counterparts.

Russia currently has a limited number of commercial projects in the region in petroleum, mining, nuclear energy, construction, and space services.  It also sells a modest number of vehicles and other goods to Cuba and select other economies, but beyond military goods, the competitiveness of Russian products and services is minimal.

In the past year, Russia has lost ground with a number of partners in the region with whom it was building relationships.  In Argentina, the election of pro-Western President Mauricio Macri sealed the fate of several already troubled projects including his nation’s purchase of Su-24 interceptor aircraft, the installation of GLONASS satellite communication facilities, and a contract to build a nuclear reactor in the Atucha nuclear complex.

In Brazil, important Russian arms deals have remained stalled, including the Pantsir S-1 air defense system, although the government did purchase a large number of Igla-S (SA-24) air defense munitions, delivering the last units in April 2017.

Even in Venezuela, its main arms client in the region, Russia appears to have lost ground.  There, the financial collapse of the country’s socialist regime appears to have forced it to make a choice to invest in engine overhauls and other work to maintain the operational capability of the existing fleet of Russian combat aircraft and helicopters, putting on hold the acquisition of an additional 13 Su-30 interceptors.

While Russian setbacks in the region may encourage U.S. complacency, they actually mask dynamics in the region through which Russia would be able to expand its presence more rapidly than is commonly recognized.

In Mexico, whose Army has numerous senior officers who have been indoctrinated (and presumably evaluated) in Russian military institutions, the political tension with the U.S. has created an incentive for Mexico to move closer to Russia as a geopolitical counterweight and warning to the U.S.  The Russian dual-use manufacturer Kamov has already sold Mexico ANSAT helicopters, and Mexico is reportedly set to reevaluate the purchase of more Mi-17s.  A victory by leading leftist candidate Andres Manuel Lopez Obrador (AMLO) in the July 2018 presidential elections could push Mexico even further toward collaboration with Moscow.

Although Nicaragua has been Russia’s hub for re-engaging with Central America, the entire Northern Triangle is susceptible to expanded political and security engagement with the country.

In Nicaragua, Russia has provided the nation’s military with an array of equipment, including BMP-3 and BTR-80 armored vehicles, Mirazh patrol craft, Molina missile boats and T-72 tanks to replace their aging T-55 predecessors.  It has also discussed selling the country Yak-130 fighter interceptors.

Building on the strong relationship with Nicaraguan leader Daniel Ortega, whom the former Soviet Union helped take over the country in 1979, Russia also helped to erect a new counterdrug center in the Managua suburb of Las Colinas, which opened in November. The facility will initially train Nicaraguan police, but is anticipated to eventually receive personnel from across Central America to support Russian security interests within the region.

Russia has also constructed a facility near the U.S. embassy outside Managua for communicating with its GLONASS satellite constellation.  Some have suggested that its sensing equipment, located suspiciously close to the U.S. Embassy, could be used for espionage. Finally, the Russians have signed an agreement that allows Russian naval vessels to access Nicaraguan ports, although it’s not a formal “basing” agreement.

Elsewhere in the Northern Triangle, El Salvador’s President Salvador Sanchez Ceren, who worked closely with the Russians during his days as a guerrilla leader in the Salvadoran Civil War, could expand political, economic and security cooperation with the Russians if the United States either fails to fully fund the Alliance for Prosperity (AFP) aid program for the region or ends Temporary Protected Status for the 200,000 Salvadoran immigrations in the U.S., whose remittances to Salvador have arguably given its government an incentive to avoid policies that might alarm Washington.

In the Caribbean, Russia has made notable progress in shoring up its position in Cuba in the buildup to February 2018, when Raul Castro formally steps down as Cuba’s leader.  The Russian company Interrao has built four power generation facilities on the island, and truck maker Kamaz has established a vehicle assembly facility there.  Most recently, Russia has discussed building a railway in Cuba and modernizing the Cienfuegos oil refinery. In October 2017, the governments signed an agreement continuing Russian oil donations and expanding other petroleum sector cooperation.

Nonetheless, a separate $800 million project to help Cuba finish the Juragua nuclear hasn’t gotten off the ground, nor has Russia substantially helped Cuba to replace its aging stockpiles of Mi-8 helicopters and other Cold-War era military equipment. Other forms of collaboration more directly threatening to the U.S. —such as military base access agreements and the re-establishment of a Russian presence at the signals intelligence collection facility at Lourdes (publicly discussed by Russian congressmen and defense officials)—have remained only rhetorical.

In the Dominican Republic, although the country has not collaborated extensively with Russia in the political or military arena, the elimination of visa requirements for Russians in September 2015 helped increase Russian tourist visits by 90% last year alone.

In Suriname, leader Desi Bouterse—whose son Dino is in a U.S. prison for drug dealing and offering to set up a Hezbollah training base in the country—is reportedly close to signing a military cooperation agreement with Russia.

In Venezuela, despite the negative impact of the nation’s previously-mentioned financial condition on purchasing arms from Russia, the division of the opposition in the face of severe setbacks in the October 2017 regional elections, rising prices for its petroleum, and the successful seating of a new Constituent Assembly with power to amend the constitution, could combine to permit the survival of the Maduro regime.  Indeed, the assembly’s modification of Venezuela’s constitutional framework could allow the Maduro regime to mortgage even more national assets to back further credit from Russian and Chinese sources, potentially even permitting the Russian state oil company Rosneft to assume a more intrusive role in leveraging Venezuelan oil operations.

In Bolivia, the government of Evo Morales is in the process of recapitalizing its military, and has expressed interest in Russian transport helicopters and Yak-130 interceptors.  It has also contracted with Rosatom to build a nuclear research reactor in El Alto, although the source of the considerable water required to cool the facility is unclear.  The Russian petroleum company Gazprom has been an important player in the Bolivian petroleum sector since 2007, including working the Incahuasi field since 2016, and the Azero block, which will start production in 2018.

Beyond ALBA, multiple countries maintain significant defense relationships with Russia, despite close ties to the U.S. and Europe.  Peru, for example, turned to the Soviet Union as its principal arms supplier during the government of Juan Velasco Alvarado, and continued buying Russian equipment such as Mig-29 fighters and sending personnel to Russia for training during the presidency of Alberto Fujimori.  In recent years, Peru has continued to buy arms from Russia, acquiring Mi-171 transport helicopters and Mi-35 attack helicopters to support operations against terrorists and criminal groups in remote mountainous parts of the country’s interior. The Peruvian Air Force is in the process of contracting for 24 additional Mi-171s as well as establishing a maintenance facility for the helicopters near the La Joya base in Arequipa, and may contract to with the Russians to upgrade its aging Mig-29 fighters.

In Chile, the troubled center-left second government of Michelle Bachelet has opened a door for upgraded military relationships with Russia, including a naval cooperation agreement. However, conservative former president Sebastian Pinera (2010-14), set to retake the office in March 2018 after winning last November’s national election, is expected not to broaden Chile’s opening to Russia as much as his opposing candidate Alejandro Guillier would have.

Sino-Russian cooperation strategies in the region: What can the U.S. do?

Ironically, Russia’s advance in Latin America has been limited by China’s own progress in the region.  The PRC has already displaced Russia, to some degree, in arms sales to countries such as Peru and Venezuela.  In the commercial field, Chinese companies have bought Rusal’s interest in Jamaica’s Alpart bauxite refinery, and beat out Rosatom for nuclear energy work in Argentina.

Yet Russian and Chinese interests also complement each other, insofar as the former’s loans and other investments sustain anti-U.S. regimes such as Venezuela, giving them options to conduct troublesome activities with Russia that the PRC would not necessarily risk.  If Russia and China collaborate more explicitly in Latin America, as they occasionally have done so in Siberia and elsewhere in Asia, the threat to U.S. interests could expand, with polar strategy increasingly becoming a focus.

In responding to the Russian challenge, the U.S. should not attempt to block the region’s legitimate political and commercial interactions with Russia and other commercial actors. Instead, it should respectfully apply a combination of incentives to prevent it from building a presence that empowers undemocratic, criminal, and/or anti-U.S. regimes, and from expanding Russian options that could threaten the U.S. from the Western Hemisphere in times of conflict.

The U.S. can help itself by being a good partner, avoiding, where possible, withdrawal from treaty commitments, abrupt increases in deportations of Latin Americans, and rhetoric from senior officials impugning our partner nations and their citizens.

Where possible, the Department of Defense should prioritize high-profile foreign military sales that draw the partner away from reliance on Russian goods and support relationships.  These include the sale of the Stryker combat vehicle to Peru, as well as the continued sale of Blackhawk helicopters and HMMWVs to Mexico.

Within the Army, SOUTHCOM and NORTHCOM, the challenge of Russia (along with other extra-hemispheric actors) increases the importance of resourcing and supporting U.S. theater engagement efforts, including staff talks, exercises, training, and professional military education of partner nation personnel in U.S. institutions such as WHINSEC and the Army War College.  Leveraging State Partnership Programs is an important force multiplier in this regard.

The services can also do more to show U.S. value as a credible partner through peer-to-peer engagements on topics such as the promotion of institutional transformation or augmenting capabilities-based acquisition. Existing U.S. relationships with the region, its geographic proximity and Russia’s limited resources gives the U.S. good options for limiting the more threatening aspects of Russian possible advances.  Yet as Russia’s presence grows, it is in the U.S. interest to act sooner rather than later.