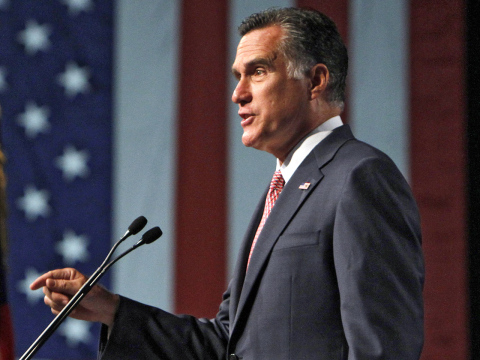 GOP presidential hopeful Mitt Romney has amassed a collection of headlines impugning his foreign policy credentials since his speech at the Veterans of Foreign Wars (VFW) convention and overseas trip. This publicity he has received all too characteristically crops Latin America from forecasts about what a Romney White House would mean for hemispheric policy issues. Still, as his sparse commentary on the region suggests, Latin America would not only remain out of frame, but out of focus should Romney secure the presidency.

In his lone reference to the region during the VFW address, Romney focused exclusively on ties between Venezuelan President Hugo Chavez and Hezbollah. Such emphasis on terrorism in Latin America allowed Romney to incorporate the region into his broad global narrative: the world is “dangerous, destructive, chaotic” and it is America’s moral duty – no, its “destiny” – to safeguard freedom for all humanity.(1) Though the escalating link between the South American cocaine trade and Middle Eastern terrorists marks a valid security concern, Romney has neglected the region’s geopolitical importance with those lean remarks.

Far worse, his foreign policy demonstrates a lack of regard for Latin America’s current political and economic context. The sharp language Mr. Romney has employed in painting the 21st century as an “American century” will likely alienate large segments of Latin America’s political elite.(2) In particular, he has entrenched the United States as an ideological adversary to the Bolivarian Alliance (ALBA), a cooperative that aims to provide an economic alternative to market liberalization based on social welfare and mutual advantage. Drawing from Simon Bolivar’s contributions to the colonial liberation of Latin America, the movement also has prompted calls from ALBA member states–Venezuela, Cuba, Bolivia, Ecuador, and Nicaragua–to confront U.S. imperialism as well as disband the IACHR.

By stressing the inherent superiority of the United States in his speeches, Romney has fed the distaste for domineering foreign influences in Latin America. His imagery only strokes discord, as it situates the United States on the moral high ground bearing the “eternal torch of decency,” a “lantern of liberty,” while the rest of the world presumably stoops in boorish decay.(3) It implies that the United States must uplift other nations so all can experience the grandeur of American society. Such visions for an American century cast the United States as an oppositional figure to any nation that disputes the idea that “[the United States leads] the free world and the free world leads the entire world.”(4)

To be fair, President Obama shares the conviction that home-grown American values and institutions confer this country with an elevated global posture. Unlike Obama, however, the anticipated Republican nominee couches his views on American exceptionalism in paternalistic metaphors and prideful diction. His “unapologetic” tone emerged at the VFW convention as well as in his white paper on foreign policy.(5) He has dismissed any notions of “America as a potentially malign force” and lambasted Obama for expressing regret about perceived abuses of U.S. authority, such as its interference in other countries’ internal affairs, torture of detainees, stagnation on global warming, and record of only selectively promoting democracy. In fact, he defends those actions as necessary to keep the world safe.(6)

That outlook contorts reality, though, glazing over entire episodes in American history. Contrary to what Romney might argue, for example, Latin America is by no means teetering on the brink of a state-controlled economic system. Many countries in the region may have embraced socialist philosophies and expanded public services to enhance education, health care and worker compensation, but with the exception of Cuba, these measures have overwhelmingly taken shape within democratic institutions–or at the very least, through constitutional processes as we see in Venezuela. Further, designating Cuba and Venezuela as two of four “rogue states” that stand to threaten U.S. strategic interests is hyperbolic and self-serving for politicians like Romney who cater to right-wing extremists.(7) Neither country is as antagonistic and isolated from the international community as Iran and North Korea. With its incorporation into Mercosur, Venezuela will have to make valuable concessions to maintain integration, such as participating in the bloc’s FTA with Israel, a state that Venezuela does not recognize. Cuba for its part has opened up its economy under Raul Castro, however marginally, and no longer marks a threat worthy of the 50-year-old embargo that the United States has not since replicated.

Certainly, a look at Romney’s proposals reveals mere talking points cemented with slogans over substance. For as much as he has attempted to portray Obama’s stances as competing with his own while distancing himself from George W. Bush, Romney may actually be too similar to his would-be predecessors for Latin America’s wellbeing. Regarding Cuba, Obama lifted travel bans to the country, but has otherwise adopted Bush’s strategy of catering to the domestic anti-Castro lobby. If elected, Romney’s advisors would likely have him continue such pandering if not reinstate the previous travel restrictions.(8) To diminish drug-related violence in the region, Romney has proposed further militarization of the conflict as well as a hemispheric taskforce to enhance intelligence sharing, two recommendations Obama has explored through the Bush administration’s Mérida Initiative. Even with his proposed Campaign for Economic Opportunity in Latin America, Romney has said he aims to build on the popularity of the FTAs with Panama and Colombia, both negotiated under Bush but signed by Obama.(9)

Let’s face it: when it comes to Latin America, Obama’s policy map is almost indistinguishable from that of his presidential forerunner. But Romney moves beyond any statements Obama has made into neoconservative territory with his view of the international system. He has indicated in his white paper that he believes the United States ought to dictate world affairs as a supreme unilateral force. Further, he has scorned Obama for upholding the virtues of multilateral organizations and implying that Washington should allow other actors to exercise global leadership.(10) If he had his way after the campaign season, Romney would no doubt draw Latin America back to the days of the Monroe Doctrine, in which the United States alone could decide which powers meddled in the Americas.

At the beginning of his administration, by contrast, Obama enjoyed wild popularity in Latin America for having championed antithetical aspirations. At the Summit of the Americas in 2009, for instance, Obama emphasized the need for a shift in U.S.-Latin American relations toward an “equal partnership.”(11) Yet, due largely to tacit U.S. support of the 2009 coup in Honduras, his standing in the region has waned. Many have attributed the president’s recent replacement of his senior Latin American advisor to the heavy censure he experienced in Cartagena at the 2012 Summit of the Americas.(12) Though only time will tell if this decision will alter Obama’s policy on Latin America, it represents an encouraging sign. During his first term, the global recession, Arab uprisings and wars in Afghanistan and Iraq may have monopolized the U.S. foreign policy agenda, but at least throughout this tenure Obama’s attitude toward Latin America was not reactionary.

Romney justifies his intended resurgence for the United States abroad by claiming that those who do not subscribe to American ideals are threats to world peace and that such threats exist all around us. In some cases, as with terrorism and organized crime, his cautionary tale may hold true; however, the speculation that Venezuela and Cuba constitute a clear danger to free societies everywhere has grown obsolete in our increasingly multipolar world.

Singling out countries that openly defy the Washington Consensus as a reason that Latin America ought to defer to U.S. leadership exposes how out-of-touch Romney is. It all but ignores the rise of regional powers, and dilutes the complexity of Latin American relations down to an antiquated model of good and evil. The portrait Romney raised at the VFW convention may have spoken to an older generation – “[l]ike a watchman in the night, we must remain at our post…” – but to the rest of the world, such rhetoric indicates he is stuck in the Cold War-era.(13) As with his Paul Ryan vice presidential pick, hiding behind anachronisms and bellicose nationalism may allow Romney to play to domestic discontent with the flagging economy. Voters must be careful, however, not to fall for this ruse.