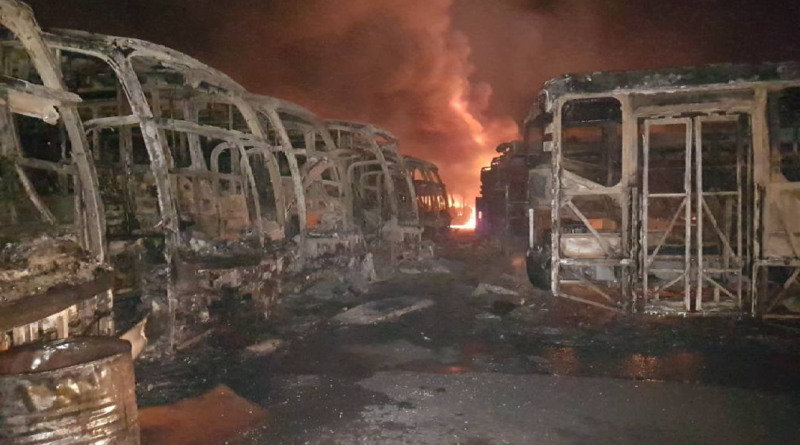 One May 20th, the 21 year old vendor from the shanty town of Petare,  Orlando José Figueras, was beaten, stabbed, doused with gasoline and set on fire by opposition militants in the middle class neighborhood of Altamira during an anti-government demonstration reportedly because they took him for a Chavista or a thief. This atrocity has sent tremors throughout the popular barrios and raised the profile of terrorism from the right in Venezuela. The horrific scene was captured on video and by professional photographer, Marco Bello, and described in testimonies of the victim and his parents. Other demonstrators at the scene reportedly urged the attackers not to kill Figueras as he pleaded for his life.  What happened to Figueras, who has lived to tell his story, is impossible to ignore, and it casts light on the hatred and savagery of some radical and extremist supporters of the opposition in Venezuela.

This hostility did not emerge overnight. An intensifying rhetoric aimed at vilifying and stigmatizing  all Chavistas, often mixed with racism and bigotry, has motivated a growing number of hate crimes and assaults as well as the destruction of symbols of Chavismo. This destruction is manifest in recent vandalizing of government buildings; the Hospital Materno Infantil Hugo Chávez (Hugo Chavez Maternity Hospital); a fleet of buses, and the humble house of a Chavista artisan in the state of Merida. There have even been a number of cases recently where Chavistas, their family members, and perceived sympathizers have been harassed by opposition supporters in the U.S., Italy, Spain, and Australia.

Since some of the anti-government violence and road blocks occur in opposition governed municipalities, in too many cases with impunity, eight mayors have been served notice by Venezuela’s Supreme Court to restore order in accord with their legal obligations. There is also growing pressure on a reluctant Attorney General, Luisa Ortega Díaz, whose allegiance to the government appears to be wavering, to vigorously investigate, and where appropriate prosecute, all of these crimes.

Despite the political polarization that has gripped Venezuela, hatred and violence does not garner broad support in this Bolivarian Republic. According to an April 2017 Hinterlaces poll, 80% of Venezuelans are “in disagreement” with the violent demonstrations and guarimbas [street disturbances] as instruments of protest. Most Venezuelans want peace and support talks between the opposition and the government.

Generalizing about either the opposition or Chavismo will inevitably distort the complex political landscape in Venezuela. The opposition to the Maduro administration includes a diversity of political orientations, from extreme right to social democrat and many of the opposition parties come under the umbrella of the United Democratic Roundtable (MUD). There are also a number of dissident groups on the left, including ones that consider themselves Chavista, but unlike the MUD, none of those groups are appealing for U.S. intervention to advance their agendas.

Most anti-government demonstrators are expressing their dissent peacefully and have legitimate concerns and demands. Many in the opposition argue that the government is undemocratic and corrupt, and that the security forces repress lawful protest. The Maduro administration argues that it is fighting corruption; that there is a U.S. backed coup underway in Venezuela; and that security forces are dealing not only with lawful demonstrations, but also with various levels of anti-government violence, including hate crimes, sabotage, barricades, destruction of property, sniper fire, and armed attacks on police and Bolivarian National Guard (GNB), some of which have been lethal. In the midst of these challenges, Chavistas are still able to mobilize sizable peaceful demonstrations, such as the ones on Venezuelan Independence Day (April 19), and on May 1, to defend national sovereignty and the Bolivarian project.

Some of those in the front lines of anti-government street disturbances are minors, equipped with expensive gas masks and helmets, shields, and at times, Molotov cocktails and homemade weapons. In some middle class municipalities governed by MUD politicians, there is growing impatience among residents for having to suffer the indignity of being ruled by masked children and youth, while oftentimes police look the other way. In such communities these one time “heroes of the resistance” have worn out their welcome. The government has described  these children as victims and delivered a report to UNICEF on May 25th documenting violations of the laws that protect children from exploitation.

Government officials in Venezuela reported the arrests of six paramilitaries from Colombia in the state of Tachira last week, who are allegedly contracted by radical right-wing opponents of the government. These claims deserve some serious investigation by an independent body rather than being derisively dismissed as unworthy of consideration. This is critically important because these ultra right-wing elements arguably aim at terrorizing the general population, exacerbating the economic crisis, and ultimately creating sufficient chaos in Venezuela so as to legitimate a so called “humanitarian” intervention by the United States. If this is the case, the Venezuelan people ought to be commended, even at this late date, for not releasing the dogs of war on a large scale. Venezuelans want peace.

Venezuela Analysis (VA) keeps track, on a daily basis, of the causes of recent deaths in Venezuela.  In a recent summary, VA reports:

“The latest killing brings the death toll in seven weeks of anti-government protests to at least 55, including eight confirmed deaths at the hands of authorities and eighteen people killed by opposition violence. The Public Prosecution has confirmed that at least 972 people have been injured in the unrest to date.

With regard to the MUD’s bid to enter popular barrios to recruit for their cause, The MUD is not likely to get significant traction.  Despite the severe economic crisis, which has been exacerbated by an economic war reminiscent of the tactics used to bring down Salvador Allende, Chavistas and most social movements have not jumped on the MUD train and have defended their neighborhoods from the entrance of opposition militants. The image of Figueras on fire; the assassination of the young Chavista legislator Robert Serra and his wife (October 2014); and the historic memory of the Caracazo (February 1989) are all vivid reminders of the fate that could await Chavistas under a MUD “transition”.

Hate crimes, and the terrorist violence of paramilitaries and the ultra right, as well as the presence of so many children in the ranks of opposition militants at the barricades, is not just a problem for Venezuelans; it could soon pose a political problem for Washington and its allies in the OAS, which justify their blatant interventionism in the name of human rights and democratic values. As Patricio Zamorano points out, Secretary Luis Almagro’s extreme partisanship on behalf of the Venezuelan opposition has not only (deliberately or not)  given the green light to hard liners within the opposition camp;  it has also undermined talks being promoted by Pope Francis. Almagro now has the infamous distinction in the region of severely damaging the institutional legitimacy of the OAS in order to do Washington’s bidding.

The State Department views Venezuela as an obstacle to the rehabilitation of United States hegemony in the region and it sees the OAS as an instrument for imposing its agenda. There is no mystery over this. In an unusual display of candor,  the State Department, in its Congressional Budget Justification for FY 2018, states:

“The Organization of American States (OAS) promotes U.S. political and economic interests in the Western Hemisphere by countering the influence of anti-U.S. countries such as Venezuela and by promoting free and fair elections and building international support for the peace accord in Colombia and rebuilding efforts in Haiti.“ (p. 180)

The OAS ought to take issue with such a statement and insist that the organization should be promoting the “political and economic interests” of all the member states in the spirit of new regional organizations that have worked overtime to buttress the region against an excess of U.S. manipulation.

Such manipulation and meddling is obvious in the case of Venezuela. Obama’s executive order declaring Venezuela an “unusual and extraordinary threat to the national security and foreign policy of the United States”; targeted sanctions against the government; funding for opposition organizations; as well as recent meetings between opposition leaders and U.S. officials; have provided the opposition with the confidence to stay the course for nothing less than regime change without delay.  Ironically, the MUD rejects the regional elections scheduled for December 10, 2017 for which it previously had been clamoring; repudiates the constituent assembly process; demands the release of “political prisoners”; and refuses talks with the Maduro administration mediated by Pope Francis and supported by the UN, CARICOM and other regional partners, as well as the majority of Venezuelans.

It is urgently important to condemn not only abuses by security forces, but also the selective assassinations and hate crimes against Chavistas.  The MUD leadership’s failure so far to denounce all terrorist violence and to completely repudiate the use of children at the barricades, as well as the continued reluctance of some opposition mayors to act to restore public order in their municipalities, is not consistent with a principled stand on human rights.  Although so far anti-government violence is limited to a few parts of the country, attempts at plunging this South American nation into chaos in order to justify foreign intervention ought to set off alarm bells for all progressive forces.

Featured Image: Fifty-four public buses were torched in Ciudad Guyana on May 22. Taken from: @TransBolivar