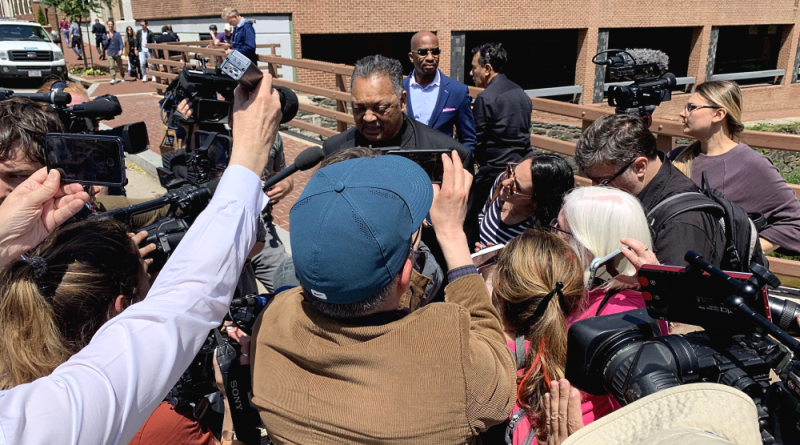 Jesse Jackson, the historic icon of the civil rights movement, visited the besieged Venezuelan Embassy in Washington DC, to support peace and oppose a US war against Venezuela. Rev. Jackson also helped deliver food to the Embassy Protection Collective. The Collective has been inside the embassy since April, with the permission of the constitutional government of President Nicholas Maduro, in order to protect the diplomatic mission from an illegal takeover by Guaidó supporters. In a message from the  Collective to the State Department on May 13, the Collective states:

Since electricity and water have been cut to the building and Guaidó supporters have been blocking food and mail deliveries, the Collective was facing shortages of vital supplies. Defying the heavy police presence, Rev. Jackson proceeded to personally deliver food to the members of the Collective. With access to  the front door of the embassy blocked, the police officers in charge allowed Jackson and his team to deliver the food through a second story window by means of a rope and basket thrown down by the activists inside the Embassy. A lone Guaidó supporter used force to try to prevent the delivery of the food, grabbing onto the rope and trying to steal the bags of food. The police officers on the scene stood by and failed to intervene to stop this use of force against Rev. Jackson’s team. Several  activists had to wrest the rope and food away from this physically aggressive Guaidó supporter, as police agents passively stood by.

In this video, you can see the entire sequence of the delivery of food by Rev. Jackson.

Jesse Jackson expressed opposition to the spread of war into the Western Hemisphere and made a call for dialogue in Venezuela, respect for international law, and respect for human rights for all. “We have a war fever”, he declared, adding that “invasion will not work, occupation will not work. We must stop the war on Venezuela.” He also criticized the unilateral attacks of the US against the Venezuelan government, reproducing the same failed  policies that have been deployed against Cuba for more than half a century. And “like Chile, we have been there before,” Jackson explained, in remembrance of the US role in the overthrow of the democratically elected President Salvador Allende in 1973.

When asked why he was supporting the Embassy protectors, Jackson said:

“War is expensive, war is futile. You cannot starve Venezuela into submission. Unless there is aggressive diplomacy to bring both sides to the table and with the help of United Nations to figure out a conflict resolution to stop the violence. Right now we are in a dangerous course in the Hemisphere, war drums are beating, at the border with Mexico in Texas, in Yemen, Iran, in Syria, Afghanistan. We must free our foreign policy from baggage. It does not make any rational sense.”

Guaidó supporters have lost momentum and physical control of the periphery of the Embassy. The police have expelled them from the front and back entrances, and created specific areas for them and for those who support the Collective protecting the diplomatic mission. The numerous journalists also have a designated space between both groups.

COHA concurs with Rev. Jackson’s support for peace and against US military intervention in Venezuela. COHA also supports Rev. Jackson’s call for diplomacy centered on UN peace efforts as well as a multilateral approach like the one supported by Mexico, Uruguay, the Vatican and others, in order to create a space for dialogue regarding the crisis in Venezuela.