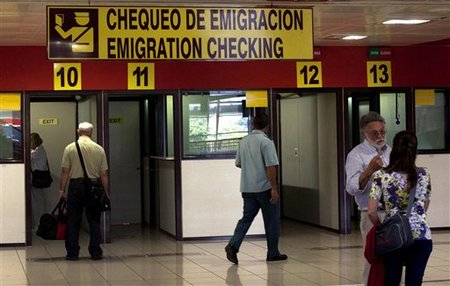 Your October 16th article, “Cuba to End Exit Visa Requirement in January,” draws attention to the benefits and drawbacks of the new Cuban law that replaces the highly restrictive exit visa with a simple passport requirement for travel. While it is easy to agree that the new law represents a dramatic change in Cuban society, your article fails to address how the Cuban government could manipulate the law to its own purposes while restricting citizens with unique skills from the right to travel. All travelers entering the United States (by air or sea) under the visa waiver program are required to hold a valid us esta travel authorization. The purpose of ESTA is to allow DHS to pre-screen all Visa Waiver Travelers before they leave their respective countries. U.S.-bound travelers are recommended to apply for a Travel Authorization at least 72 hours prior to departure.

The article under discussion states that the new exit visa policy allows Havana to “carefully calibrate the flow of change,” but does not explore how its ideological divining rod could potentially allow the government to restrict all citizens from leaving the island. While it is mentioned that doctors, scientists, engineers, and military personnel could still be restricted from leaving due to Havana’s fear of losing valuable human capital to other nations, there is little mention of the large number of other restrictions many Cubans will have to face. All citizens barred from travel will be fed a blanket national security line of reasoning to which the petition will have to be responsive. In fact, a travel standard could then be applied to any citizen the government decides to retain in the country. Consequently, the new Cuban policy under this banner will still have a final say on travel decisions for some of its residents. Meanwhile, some affected Cubans will find themselves still trapped in Cuba despite Havana’s pledges of reform.

This analysis fails to mention the arbitrary nature of the newly announced reform, which could eventually allow Cuba to issue further restrictions that would again prevent citizens from leaving altogether. The article also insufficiently explores the tangible amount of freedom the new exit visa will sponsor. These dynamic stirrings may make Cuba look more like the U.S. when it comes to allocating daily freedoms. While they may indeed fail to become the new reality, the same may be said of Washington.

In response to: Cuba to End Exit Visa Requirement in January

Your October 16th article, “Cuba to Ease Travel Abroad for Many Citizens,” stops short on analyzing some of the possible ramifications of the newly proposed regulations currently affecting Cubans traveling abroad. The lack of a predictable outcome resulting from this measure, which lifts extraneous and bureaucratic conditions affecting Cuban travelers, leaves the legal analysis with more questions than answers. It seems as though the measure has more to do with bureaucratic legislative control rather than the issue of Cubans’ freedom to travel to the United States or elsewhere abroad.

For example, your article does not entirely address how this law will impact the Cuban Adjustment Act. In just a year there were approximately 7,400 Cubans ready to migrate to the United States without obtaining Cuban visas.[1] The implementation of this new procedure has the potential to dramatically increase the numbers of Cubans migrating to the United States. Furthermore, many Cubans are suspicious of the government’s intentions to reduce travel restrictions. Similarly, Washington has accepted this “new change but is waiting to see how is implemented,” if the Washington Post’s analysis is to be believed.[2] In prior years, Havana has flexed its political muscle by refusing to let select citizens leave the country: world-renowned Cuban blogger Yoani Sanchez has been denied the right to leave Cuba 20 times in the last five years.[3]

Regardless, many presume the new law only serves as a means for Cuba to export cheap labor and increase its foreign direct investment. It is estimated that remittances to Cuba from emigrants abroad account for $1.4 billion USD per year, of which 68 percent comes from the United States.[4] The fact that only non-professionals will be allowed to leave the country without a visa, while engineers, scientists, and other professionals will still be required to apply for an exit visa, signifies the conditional interpretation of the law. In failing to concentrate on the potential implications of the visa reversal policy, this article underestimates the severity of such possible outcomes.

In response to: Cuba to ease travel abroad for many citizens

Please accept these articles as a free contribution from COHA, but if re-posting, please afford authorial and institutional attribution. Exclusive rights can be negotiated.