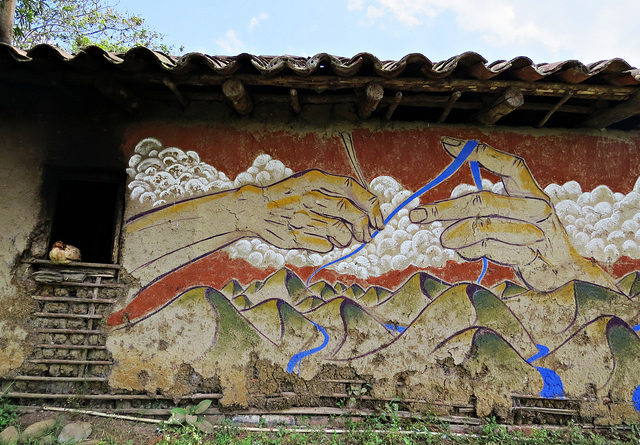 Since May 30, a national strike known as the Minga Nacional Agraria, Campesina, Étnica y Popular, or “National, Agrarian, Peasant, Ethnic and Popular” Movement has expanded throughout Colombia – rejecting the neoliberal economic model of development that the nation has championed in the last few decades. Quite meaningfully, Minga is originally an indigenous concept, referring to an effort of solidarity amongst a group of people in order to serve their community. Organizations of peasants, indigenous, and Afro-Colombian people have raised their voices in a call for an agrarian reform that would explore new ways for “sowing dignity, tilling hope and harvesting a new country.”[1] More than 20 percent of Colombians still live in rural areas – among them a majority of the Afro-Colombians and Colombian Amerindians, who make up 15 percent of the population. Meaningfully, the agricultural sector employs 17 percent of the national workforce.[2] The Rural Colombian populations have been profoundly affected by national development policies based on large scale, private exploitation of natural resources. As a result, the popular sectors have faced a steep decline in economic opportunities, serious environmental damage, and indifference about these issues from Colombia’s ruling elites. The current social upheaval came about in response to the government’s lack of action and continued non-compliance regarding commitments made after a similar wave of demonstrations in 2013, driven by the same social demands.[3] Both movements have led to violent repression, under which numerous people lost their lives – three since the demonstrations resumed on May 30 this year.[4] After the 2013 mobilization, negotiations were held between Minga leaders and the government, centered on key areas intimately connected to the livelihood and needs of the country’s rural populations. [5] The very same demands formulated back in 2013 are being reiterated today – showing not only the seriousness of these issues, but the need for the government to follow through on their commitments.

Calling on the Government to Satisfy Demands

Along with reminding the government of the 2013 negotiations, representatives of the Minga movement are calling for a land reform that would prioritize their autonomy over the land, in contrast to land exploitation by the agro and mining industrial complexes. Their main arguments address social and environmental disruptions that only seem to have been exacerbated by the continuation and expansion of the current economic development model. This model prioritizes the exploitation of land for mining and agro-industrial purposes, often without consulting the communities that originally inhabit and cultivate it. A major priority for the Minga movement is the defense of water resources that are devastatingly impacted by energy and mining projects. Additionally, the Minga calls for the enforcement of human and political rights: the urgent need to guarantee the right to protest, and the non-privatization of – and access to – healthcare and education. They also demand a critical transformation to the approach on the war on drugs.

Closely linked to the previous areas of concern, a central demand of the Minga is the participation in the Havana peace talks, which started in November 2012 between the government and the insurgency group of the Revolutionary Armed Forces of Colombia (FARC, Fuerzas Armadas Revolucionarias de Colombia).[6] The indigenous, Afro-Colombian, and peasant populations are demanding to be included in the ongoing peace talks.[7] The legitimacy and urgency of this demand arise from their intimate connection with the conflict. Topics being discussed at Havana that will directly shape the realities of rural Colombians include post-conflict rural reform and guarantees for inclusion for disenfranchised peoples and victims.

Along with a reorientation of the rural reform that is already mentioned in the peace agreement, Minga participants advocate for the implementation of the Peasant Reservation Zones (Zonas de Reservas Campesinas, ZRC), an administrative grid designed to allow a better redistribution of land. They stand in opposition to both the ZIDRES model (Zonas de Interes de Desarrollo Rural Economico y Social), which prioritizes the interests of agro-industrial conglomerates, and to the growing mineral exploitation throughout the territories. Such a model does not promote consultation with the communities on behalf of the government and agro-industrial conglomerates.[8] Instead, Minga participants call for an alternative and inclusive environmental and economic model that focuses on supporting small and medium landholders, and agricultural producers. In this model ecology prevails as a paramount consideration instead of industry.[9] Eduardo León, member of the political commission of the People’s Congress (Congreso de los Pueblos), a participating organization in the Colombian Agrarian Summit (Cumbre Agraria Colombiana, CAS), argues that food security is a necessity for Colombia, and that with the alternative ecological and small scale model this factor would be strengthened.[10] Food safety is seen as a pillar for the autonomy and sovereignty of the country, since it will not only provide independent internal food production, but also prevent the country from dependence on foreign producers.

Within the same scheme, a source of immense discontent is the free trade agreement that Colombia signed with the United States. This agreement has diminished local agricultural production that cannot compete with the subsidized massive production of the North. This has directly affected the livelihoods of these populations by sharply reducing their economic opportunities.[11] However, negotiations with the government have become virtually impossible due to its absolute refusal to discuss any part of its economic policy.[12]

The peasant movements have been making the same demands for the past three years, with no substantial advances.[13] On June 2, the third day of the national strike, the Ministers of Internal Affairs, Mining and Energy, the Environment, and the High Council for Post Conflict (Alto Consejo para el Postconflicto) met with representatives of the National Indigenous Organization (Organizacion Nacional Indigena Colombiana, ONIC) in Cauca, south-western Colombia.[14] However, the ONIC chose to leave the negotiation table in reaction to the death of an indigenous demonstrator, Gersain Ceron. On June 4, “agreements of trust” were signed in order to prevent army intervention and guarantee the respect for human rights – namely through the presence of representatives of the Office of the Ombudsman (Defensoria del Pueblo, an institution of the government responsible for the protection of human rights).[15] By June 7, negotiations were convened in Bogota, gathering the same participants.[16]

On the same day, the CAS solicited the Inter-American Court on Human Rights (IACHR) to take precautionary measures and send observers to protect demonstrators’ “life, personal integrity, individual freedom, and freedom of speech.”[17] In the letter directed to the IACHR Executive Secretary Emilio Alvarez Icaza, the CAS denounces the violent methods of the public forces and the authorities (both local and national), which by then had led to the death of three aboriginal people; the injury of 200 (both policemen and demonstrators); and the arbitrary detention of 160 demonstrators.[18] The letter expresses concerns about helicopter surveys of strategic zones of the strike, as well as attempts at blocking the supply of food and water to the demonstrators. Particularly worrisome are the methods of the anti-riot police (Esmad): the CAS claims Willington Quibarecama, first victim in the Minga this year, died during an Esmad attack in which “flash grenades packed with dangerous objects such as nails or metallic fragments” were used against the demonstrators.[19] The CAS requested that the government “immediately withdraw the armed forces and their intelligence agencies from the gathering points, or any other actions related to the social protest.”[20]

Ironically, the version of the facts provided by the authorities is the polar opposite. When speaking to the Colombian broadcast station Caracolradio, Defense Minister Luis Carlos Villegas declared that “in the national strike, what has been constant is rather the violence against the state forces.”[21] He estimated the number of the wounded to be a mere quarter of what the CAS had announced – only counting the nearly 50 officers who were injured. He further clarified that Quibarecama lost his life in a “traffic accident,” and that the two other demonstrators were killed by “artisanal weapons”. This latest reference highlights the Minister of Defense’s attempt to associate this mainly pacifist social movement with “terrorist” activities. The official message emphasizes that “there are two protests”: the peasant one, and one infiltrated by the existing armed faction National Liberation Army (Ejercito de Liberacion Nacional, ELN).[22]

The Colombian government appears to promote fear and animosity among the general Colombian population in order to discredit the movement composed mainly of minorities. As the Minga continue their struggle for land rights and social justice, legislators examine a controversial bill which would allow the police to criminalize protesters occupying public space, and to carry out arbitrary arrests – including in private residences, without a judicial warrant. Nevertheless, “mobilizations will continue indefinitely until the government listens to communities and provides concrete solutions to their problems,” CAS declared to TeleSUR on June 8.[23] Thousands have already joined the Minga, blocking over a hundred strategic points throughout the country – including the Panamerican highway.[24] At stake is the future of minorities who, though forgotten by elected officials, immensely enrich and contribute to the nation. The situation illustrates an oblivious government that is sympathetic to the interests of financial elites and even unable to guarantee basic needs to its citizens. The protests of the Minga are rooted in structural inequalities and a call for a profound reorientation of the development model in which Colombia has been engaging for years. It is a pressing and historical necessity for the traditionally disenfranchised to have a voice in the upcoming peace agreement, and the formulation of socially and economically just national development policies.