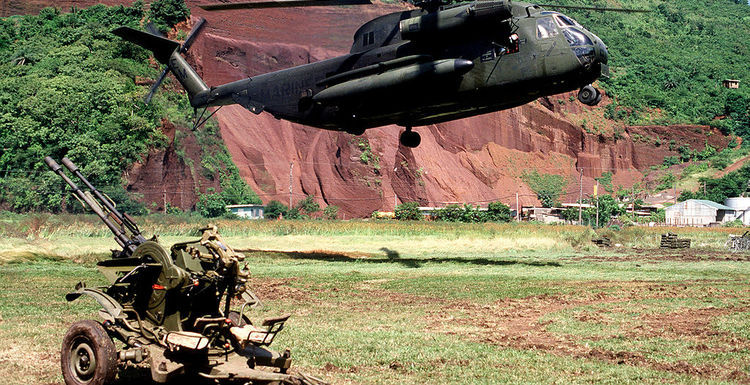 Today, Friday, October 25, marks the 30th anniversary of the U.S. intervention in Grenada. While this American military deployment is but a brief footnote in U.S. military history during the Cold War (and the premise of a 1986 Clint Eastwood film, Heartbreak Ridge), the operation, codenamed Urgent Fury, is a milestone in the Caribbean island’s history. The way in which the events of October 25 are remembered in Grenada, the rest of the Caribbean, and in the United States couldn’t vary more. While the intervention in Grenada arguably never represented a direct security threat to the U.S., it did help to divert attention from the Beirut barrack bombings, which had occurred two days earlier and which killed 241 U.S. and 58 French military personnel. Given the large degree of disagreement throughout the world about the legitimacy of the invasion and the nature of the threat it represented at the time, the anniversary marks a very useful opportunity to bring together different strands and perspectives on the event.

Maurice Bishop, the charismatic leader of the Marxist “New Jewel Movement,” led a coup against the Grenadian government in 1979, and ruled until 1983, when Deputy Minister Benjamin Coard seized power, putting Bishop under house arrest and eventually presiding over his execution. [1] The government was then instantly dissolved and was replaced by a military junta, which implemented such draconian policies as a “shoot on sight” curfew and a shutdown of the country’s airport. [2] At the time, there were some 1,000 American citizens living on the island, many of them students at St. George’s School of Medicine. Reportedly, the Reagan Administration had become concerned that these citizens would likely be harmed or used as hostages, and had also expressed concern about the construction of an airbase on the island, which, in the words of Reagan, “looked suspiciously suitable for military aircraft, including Soviet-built long-range bombers.” [3] An October 2003 commentary by Stephen Zunes, then-associate professor of Politics at the University of San Francisco, explains that a reason for Reagan’s portrayal of the airport was because it had been built with Cuban assistance. Zunes points out that many construction workers were Cuban, but the contractor was British. Moreover, as Zunes correctly highlights, the airport could not have been used for military purposes because it lacked crucial infrastructure, such as “bomb-resistant underground fuel tanks, sheltering bays for parked aircraft, or fortified control towers.” [4]

The buildup, both in military readiness and in public relations, occurred in the context of a worsening situation for U.S. interests in Lebanon. On October 23, 1983, two trucks exploded at a Marine base in Beirut, ultimately killing 241 U.S. military personnel and 58 French soldiers, the worst attack sustained by the Marines since 1945. [5] The climate of anger and uncertainty created by these, in Reagan’s words, “hideous and insane attacks,” seems to have instilled a hunger for military victory at any cost in the American people. [6] Reagan’s justification for action in Lebanon, namely that “we are a nation with global responsibilities,” was just as easily applied to Grenada. [7]

The United States mobilized its military and on October 25, invaded the island with 1900 Marines  that did battle with Grenadian and Cuban forces. The total number of U.S. troops eventually reached 7,000.  The U.S. military suffered 18 casualties, the Cubans 24 (Fidel Castro had deployed Cuban military personnel to the island, but the exact number is unclear), and the Grenadians 45.  The result was a total defeat for Grenada, after which authority over the island was awarded to the former British Governor General of the island, Paul Scoon.

The backlash was immediate both internationally and, to a lesser extent, domestically. While the decision to invade was on the whole popular among the American public, it was lambasted in the U.N. and other international forums. [8] The U.N. General Assembly said that it “deeply deplores the armed intervention in Grenada, which constitutes a flagrant violation of international law and of the independence, sovereignty, and territorial integrity of that state.” [9] Many nations, including Vietnam, Poland, and Algeria, said that the claimed U.S. motivations for invasion were merely a pretext. [10]

The invasion ultimately resulted in reform in the United States military, which had a “glaring lack of advance intelligence about Grenada,” and reportedly made numerous errors in the operation, including unnecessary troop movements that warned the defenders of Grenada of the invasion, and a lack of intelligence that the students they were rescuing were located on two different campuses. [11] 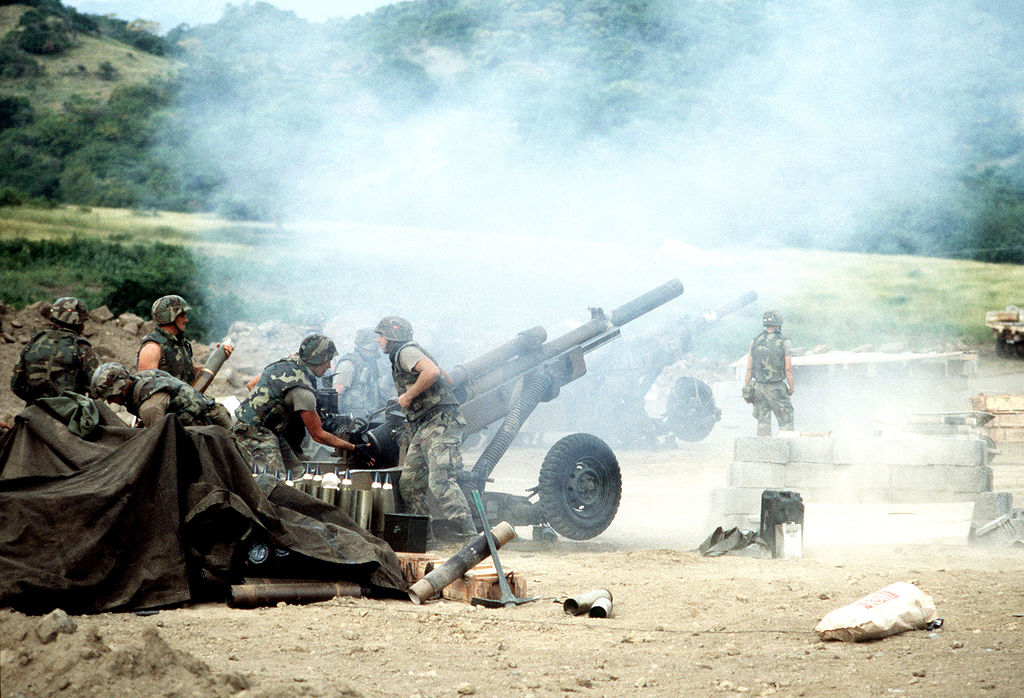 How Grenada and the Caribbean Remember 1983

The 30th anniversary of the U.S. intervention has understandably stirred emotions in Grenada. Over the past several days a number of commentaries have been published in the Caribbean media discussing the intervention, often issuing interpretations quite different from those found in the U.S. The difference between perceptions in the U.S. and those in Grenada primarily rests on the fact that U.S. scholars often situate the operation in the wider context of Cold War geopolitics at the time, including serving as a reason for critiquing then-U.S. foreign policies as well as domino-theory in the Caribbean—meaning whether Cuba and Grenada could have been the beginnings of an expansion of Soviet satellite-states in the region.

But for Grenadians and citizens of the Caribbean in general, the operation has a more personal significance. For example, the journalist Lincoln Depradine published a commentary in the news agency Caribbean News Now on October 21 discussing whether the “truth” will ever be known about how many individuals died during the U.S. operation in Grenada. [12] Depradine also muses that, “For the Americans, they call it an invasion. Grenadians’ reference swings from invasion, to intervention, to rescue mission. The more creative among us coined new descriptors, such as ‘intervasion’ and ‘rescuvasion’.” [13]

Also recently published to commemorate the 1983 events is a book by House of Nehesi Publishers. It is the work of two authors, “Maroon Lives – Tribute to Maurice Bishop & Grenadian Freedom Fighters” by Lasana M. Sekou and “Revolution As Poetic Inspiration: Grenada in ‘Maroon Lives” by Fabian Adekunle Badejo. [14]  The first part of the book is a collection of poems by Sekou, in which he touches on the Bishop assassination, the U.S. invasion, and tensions generated by revolutionary struggles and the search for justice; while Badejo contributes with an in-depth study of the critical relationship between literature, revolution, and the transformation of societies. [15]

Unsurprisingly, many analyses of the U.S. intervention in Grenada are not kind to Washington. For example, an October 19 op-ed by author Jai Parasram for Caribbean News Now began by arguing, “I am deeply offended by American writers who, after 30 years, continue to push the propaganda that America saved the Grenadians and that the people welcomed the invasion of their island.” [16] Parasram goes on to argue,

The Americans who subsequently invaded the island were not the angels they claim to be. They were an invasion force acting on behalf of their government to crush what Washington viewed as a dangerous threat to “democracy” in the Caribbean and the Americas. It was part of a plot that was hatched long before Bernard Coard moved against Maurice. [17]

The U.S. military operation in Grenada was a part of a series of plots that Washington carried out in liaison with others in the the region in order to prevent the spread of potential Moscow-friendly governments across the Caribbean. After the 1959 Cuban Revolution, the Castro government tried to promote regime change in the Caribbean and Latin America (i.e. via the iconic revolutionary Ernesto “Che” Guevara’s attempt to carry out his “foco” insurgency in Bolivia). Due to the successful Cuban revolution and the failure of the U.S.-sponsored Bay of Pigs invasion, Washington then carried out military interventions in the Dominican Republic in 1965 and then Grenada in order to prevent Soviet satellites from spreading throughout its “historical backyard.”

Moreover, as previously mentioned, the Reagan administration and the U.S. intelligence community had suffered a huge blow in the form of massive attacks against U.S. military personnel in Lebanon during that Middle Eastern nation’s civil war. The fact that only two days passed between the attack in Lebanon and the invasion of Grenada is not necessarily a coincidence. Larry Birns, director of the Council on Hemispheric Affairs, argues that the invasion of Grenada was “a military operation that was not meant to do what it said it would do.”

Ergo, given the plethora of (mostly infamous) military operations that the United States carried out throughout the Cold War, it is understandable that the brief intervention in Grenada occupies only a remote footnote in the history of U.S. military and international affairs during the Cold War.

At the time of this writing, neither the website of the U.S. embassy in Grenada, nor Grenada’s embassy in Washington, DC, have issued press statements regarding the upcoming anniversary.  As for how the three-island Caribbean nation is doing in 2013, as an October 21 op-ed by Lloyd Noel published by the news agency Now Grenada stated,

“We have had a variety of leaders, and their party machinery in control of the Nation’s affairs over the years – and here we are in the thirtieth year, with a leader and his team who had been in control for thirteen of those years, and for the second time winning all the seats in Parliament, and therefore no one in opposition in the Lower House.” [18]

The leader that Noel refers to is Prime Minister Mitchell. Incidentally, and to highlight currentU.S. – Grenada relations, Prime Minister Keith Mitchell was in Washington in early October [19] to participate in the annual meetings at the World Bank and the IMF in Washington. He had previously visited Washington and New York in July. [20]

In his October 21 commentary, the journalist Depradine wrote: “was it an invasion by invitation or an invasion by coercion?” [21] The final ruling is still out on how to accurately remember the events that led to October 25, 1983, and what happened on that fateful day and after.