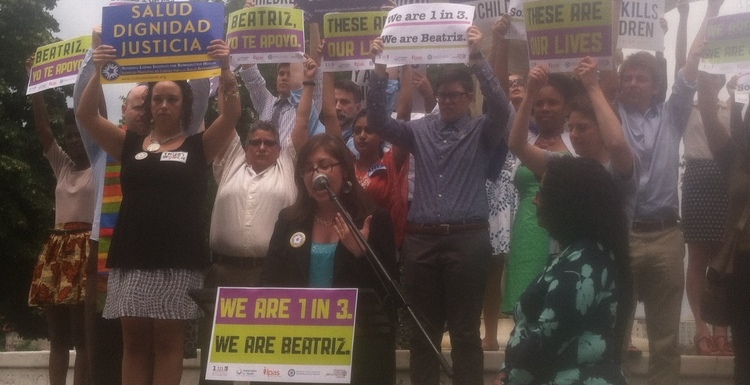 On May 29, the Constitutional Chamber of the Supreme Court of El Salvador ruled to deny a 22-year old pregnant woman afflicted with lupus and kidney disease and known by the pseudonym “Beatriz,” a potentially life-saving abortion. This ruling came in spite of medical assessments determining that it was highly unlikely that either she or her unborn child would survive the pregnancy.  Yielding to public and international pressures, most notably an order from the Inter-American Commission on Human Rights, and immense outrage from international advocacy groups, the Salvadoran court agreed the next day to “privilege the mother” and allow Beatriz to undergo an early C-section, or “induced pregnancy” procedure. On this rare occasion, El Salvador, one of seven Latin American countries with an absolute ban on abortion, showed a willingness to respect the life of a woman, allowing Beatriz to undergo a procedure that medical experts say was, for all intents and purposes, an abortion. [1] Yet Salvadoran officials insisted that the procedure was in no way a form of abortion, revealing that there had been a need to use a term that would be politically acceptable according to norms set by the Catholic Church. Unfortunately, the case of Beatriz is one more instance of the Catholic Church-dictated political apparatus that continues to limit the exercise of women’s rights in El Salvador.

Practices such as violence against women, economic discrimination, impunity, and the curtailment of female reproductive rights make El Salvador one of the most dangerous and difficult places to be a woman. Even the growing momentum and legislative successes of Salvadoran women’s rights groups have proven incapable of standing against the flames of religious stigma that fuel the current abortion debate. Latino, and particularly Salvadoran, culture is tied down to its Catholic roots in a way that reveals its colonial remnants, and persisting manifestations of power established in the heyday of Spanish imperialism. Prior to and during the Salvadoran Civil War, however, a liberation theology tendency of Catholicism challenged the Church hierarchy and led a grassroots movement to empower the poor and oppressed members of society against a backdrop of institutionally enforced class discrimination. During the civil war, this popular church stood with the poor in the face of massive repression by government security forces and priests were targeted for murder by the death squads.  The casualties included Bishops Rutilio Grande and Óscar Romero.  Despite the courageous defense of the poor and marginalized, the popular church did not constitute a major force for women’s rights.

Although today there still exists a progressive religious presence in the form of the remnants of the popular church, and individual Protestant and Evangelical priests, the overwhelming prevalence of the Catholic Church has allowed it to distinguish itself as the proponent of strict anti-abortion laws in El Salvador, discouraging those with dissenting views, either within the Catholic Church or in the other religious sects, from openly expressing their differences. [2] The constant assault on the public psyche by Catholic dogma has resulted in a religious populace that is highly sensitive to meaningful secular change. Politicians are aware of this and pay respect to the Catholic leviathan in order to ensure election to public office. According to Deysi Cheyne, director of the Institute for Investigation, Training and Development of Women in El Salvador, the Church has a great influence over public institutions like the Ministry of Education and the Ministry of Health; this clout has proven capable of infiltrating public education. [3] “[The Church] has a series of manuals and guidelines concerning sexual education that are incorporated in school curriculums,” Cheyne says. [4] Thus, religion has a major stake in molding cultural norms in Salvadoran adolescents, as well as strengthening the ideological hegemony that casts women as second-tier citizens, for generations to come.

But the Church is not just an ideological force that guides public perception of what is right and wrong; it is also a preeminent political power that exerts “direct influence on [institutional] regulatory changes,” maintains close ties to right-wing nongovernmental organizations, and a close relationship with Salvadoran elites. [5] This exclusive relationship, which allows it to significantly influence health and education policies, accounts for the antiquated legal structures in place that restrict the advancement of women’s rights in the Central American nation. In fact, the Church and other right-wing Catholic groups in El Salvador lobbied for a stricter penal code against abortion in 1997. The Church’s anti-abortion campaign swiftly achieved a ban the following year by successfully mobilizing students from Catholic schools and attaining access to Salvadoran media platforms. This yearlong effort, which was facilitated by Church entrenchment in political life, has resulted in a continued struggle for the women of El Salvador, filled with routine tales of disrespect for women’s autonomy, especially with regard to control over their own bodies, with tragic, sometimes fatal, consequences.

Public disdain for abortion procedures does not seem to make an impact on the high rate of unsafe and illegal abortions performed each year in El Salvador. About 32 abortions are performed per 1,000 pregnant women; in fact, highly restrictive abortion laws do not coincide with lower rates of abortion. [6] In Latin America the rate is even higher than in Western Europe, where abortion is legally permitted. Because of the legal consequences and social stigmas associated with abortion in Latin America, 95 percent, or 4.2 million of the region’s abortions each year, are considered unsafe according to the World Health Organization, a phenomenon that is a direct result of the criminalization of abortion throughout the region. [7] Yet women who undergo unsafe abortions do not necessarily wish to stray from the requirements for good Catholics; many are victims of the vast income inequality that still pervades most of Latin America. Women like Beatriz feel they have no choice other than to “interrupt” their pregnancies due to economic hardships, health concerns, or conception through rape or incest. [8] Beatriz has even stated that, “abortions are almost always wrong,” a belief she put in practice when she gave birth to her first child under similar, but less dire, health risks. [9] This goes to show the extent to which some Catholic values compete against matters of well being, and as an extension, some individual liberties, in nations like El Salvador.

The stringent abortion law in El Salvador, however, does not only forbid a woman’s right to choose the fate of her own body, but it also creates a society of paranoia, where risk of facing legal penalties serve as incentives for doctors and nurses to uphold the ban. In the case of “Manuela,” a 33-year-old woman with two children, Salvadoran courts sentenced the mother to 30 years of jail for murder after seeking medical attention when she suffered a miscarriage. Manuela was accused by doctors of faking her miscarriage to cover up an attempted abortion and was imprisoned without a trial. She died in jail due to health complications in 2010. The individual stories of Beatriz and Manuela reveal how the Catholic-political hydra has alienated and rendered their rights and liberties a matter of moral vilification, which is an order reinforced by not only a culture of antiquated maxims, but also a corrupted “secularism” that infiltrates professional practice in medicine, law, and politics.

On June 11, 2013, women’s rights and sexual education groups gathered in Washington D.C. to support Beatriz through public demonstration. “We’re standing here in solidarity with Beatriz and other women whose lives are negatively impacted by the stringent abortion laws we see in Latin America,” said Aimee Thorne-Thompson from the group Advocates for Youth. Indeed, the trial of Beatriz had a fortunate ending with the help of international advocacy that for many was considered a “success.” Nevertheless, this high profile case had the potential to establish a significant precedent for progressive and democratic values in Latin America.

Beatrice Loayza, Research Associate at the Council on Hemispheric Affairs

[1] “An Abortion by Any Other Name: Beatriz and the Global Anti-Choice Spin Machine” RH Reality Check, June 4th, 2013.

[2] Interview with Deysi Cheyne, Director of the Institute for Investigation, Training and Development of Women in El Salvador (IMU), June 19th, 2013. Translated from Spanish.

[5] “Persecuted: Political Process and Action Legislation in El Salvador: A Human Rights Analysis” The Center for Reproductive Law and Policy.