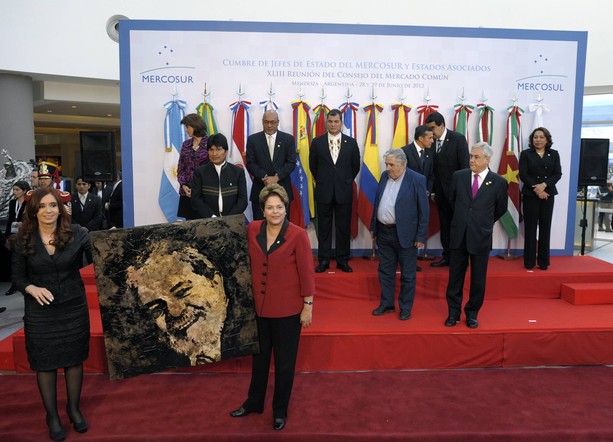 The most salient transnational consequence of Fernando Lugo’s impeachment has been the reshuffling of the already fragile South American balance of power. Paraguay had consistently blocked Venezuela’s ascension into the powerful Mercosur trade bloc professedly due to concerns over violations regarding the “democracy clause.” Ironically, after Lugo’s impeachment, Mercosur was able to suspend Paraguay by citing this same article and admit Venezuela in a move that appears based on economic pragmatism. Furthermore, before a liberal wave swept Lugo to power, the Paraguayan conservative bloc had been an ongoing ally to Washington, a tie that Asunción possibly now will look to rekindle. Therefore, implications from these fluctuating relations and regional volatility include a balance of power shift as well as a possible U.S. military reemergence in the region.

Mercosur and the Balance of Power

The hasty structural changes to Mercosur have altered the trade bloc’s internal dynamics and rendered a future reconciliation with Asunción difficult, if not impossible. The Paraguayan government alleged that Uruguay, Brazil, and Argentina had formed something akin to a new Triple Alliance and claimed that 90 percent of Paraguayans would opt to leave Mercosur if given the choice.(1) A permanent withdrawal by Asunción would drastically alter the inner politics of Mercosur because the two “guay” countries had balanced Brazil and Argentina, who increasingly have viewed Mercosur not so much as a conduit to the international market, but rather as a bastion of protectionism.(2)

Mercosur has, therefore, abandoned its original aim to promote trade integration, instead opting for a political union and enhanced access to oil. With the most to lose from this changing organizational framework, it comes as no surprise that Uruguayan President José Mujica has called for Mercosur and continent-wide customs union, Unasur, to integrate.(3) This move would add balancers to the regional organization such as the Pacific countries of Colombia, Chile, and Peru, whose integration into the international market has brought them the trade diversity Mercosur originally sought. However, Unasur lacks the economic potency of Mercosur and a further integration would render any future regional organization as nothing more than a weak political alliance.

Venezuela brings more oil to Mercosur, leaving Brasilia and Buenos Aires salivating over the possibility of unfettered access to the commodity. However, Caracas also brings questionable policies, including its shipments of oil to the oppressive Syrian government. Furthermore, Paraguay has alleged that the Venezuelan foreign minister had met with Paraguayan military forces on the eve of the impeachment and encouraged them to step in to protect Lugo.(4) If these claims are true, Caracas’ support for democratic legitimacy in its own hemisphere must be called into question. For Mercosur, Chavéz’s anti-Western stance will likely erode its ability to integrate into international markets. As Sergio Amaral, a former Brazilian trade minister, argued, “It is already difficult to negotiate with groups such as the European Union because of Argentina. What will happen when Venezuela is at the table?”(5) Mercosur clearly wants increased access to Venezuela’s oil, but by adding Caracas to the trade bloc, it threatens whatever reputation the organization has built in terms of democratic promotion and international trade policy.

The United States has quietly attempted to build its military presence in South America in order to check perceived anti-Americanism in the region, drug smuggling across the Andean route, as well as possible terrorist connections in the Tri-Border Area. Under the Bush administration, the “New Horizons” program sought to construct military bases in Paraguay, Argentina, and Chile to monitor this category of activity. In 2006 and 2007, the Pentagon successfully worked with the Paraguayan government, deploying marines to perform “medical readiness training” operations that were nothing more than observational operations to identify dangerous rural leaders.(6) However, after Lugo’s election, Asunción cut off all American military operations to appease its Southern Cone neighbors. This decision angered Washington as well as the conservative Colorado Party, which historically has sympathetically supported U.S. interests in the region.

Now, with the Colorado Party currently set to retake power in the 2013 elections and the liberal wave systematically beaten down in Asunción, the United States has an optimal opportunity to reenter the region. This almost contemptuous viewpoint might explain why Washington has all but refused to make a statement regarding the Lugo impeachment. By granting the Pentagon access to the region, Paraguay would also greatly anger both Mercosur, which is attempting to build regional hegemony, as well as the Bolivarian Alliance.

Although Paraguay tends to think of itself as an unseen nation, the Lugo impeachment has become somewhat of a watershed moment for recent South American geopolitics. With Venezuela entering Mercosur, Uruguay calling for greater regional integration, and the real possibility of U.S. military reentrance into the region, Lugo’s impeachment has directly led to a shift in regional balance of power. The ripples of this impeachment are turning into noticeable waves and thus are shaking the foundations of South American relations that have remained in place over the past two decades.

[3] “Mujica proposes to blend Mercosur and Unasur into an only more flexible group.” Mercopress, July 6, 2012. http://en.mercopress.com/2012/07/06/mujica-proposes-to-blend-mercosur-and-unasur-into-an-only-more-flexible-group