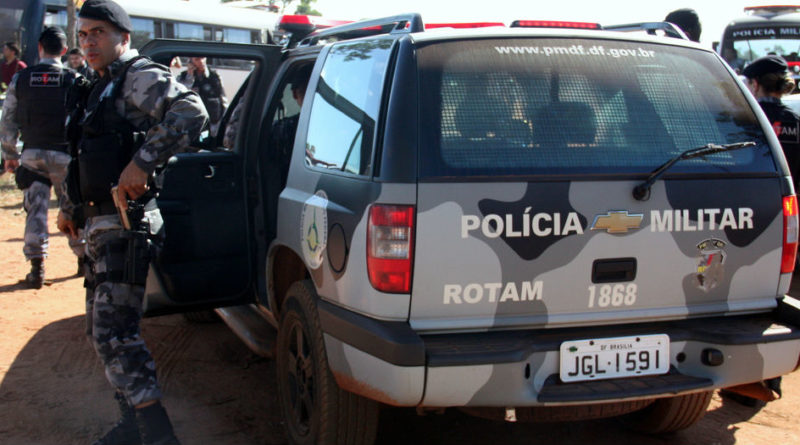 Public discussion regarding police brutality in Brazil has intensified following two waves of homicides in the Amazon city of Manaus.[1] Violence has increased in Manaus, an emerging hub for the South American drug trade, as rival cartels battle for control over smuggling routes in the Amazon rainforest.[2] However, Manaus is no anomaly; homicide rates across the entire country are at peak levels and are increasingly tied to the police.[3]

The police are believed to have been involved in the first wave of killings, which occurred between July 17 and July 20, leaving 35 people dead.[4] While investigators have not officially linked the murders to law enforcement authorities or found the perpetrators, they acknowledge that it is uncommon for those outside the police force to have access to the ammunition that was used in many of the homicides. Despite speculation that the killing spree was linked to the drug trade, a strong line of investigation suggests the recent fatal shooting of a police officer could have motivated the perpetrators.

The second wave of murders in the city occurred just weeks later during the first weekend of August, leaving nine dead.[5] Five of the cases occurred in less than 10 hours. The region’s security forces are currently being reinforced to battle the spiking violence.

High levels of homicide, however, are not a phenomenon exclusive to Brazil’s Amazon region, but part of a larger nationwide trend. Of the 50 cities in Latin America with the highest instance of homicide, 22 are in Brazil.[6] Especially disconcerting is that these levels of violence seem to be increasing. According to a report by the U.N., armed crime in Brazil was higher in 2012 than it had been in the past 35 years, with over 50,000 homicides reported that year. [7] The report blames a slow justice system, flawed police investigations, and the widespread availability of firearms for the lethal violence.

In this atmosphere broad segments of Brazilian society have come to accept a violent police force as a necessary, if perhaps unseemly, means to control crime. Conservative politicians have made strides in Congress, where 21 legislators now form what is called the “bullet caucus,” which has sought to lower the age of criminal responsibility from 18 to 16, among other measures involving law enforcement.[8] Although data has shown that Brazilian adolescents are far more likely to be victims of crime than perpetrators, the argument that this measure would help battle crime rates prevailed and the lower house of the Brazilian Congress approved the amendment.[9] The strengthening support for tough-on-crime policy has been seen by many as granting the police forces near immunity, allowing them to operate without fear of consequence throughout Brazil.

Unlike in the United States where police brutality has drawn significant opposition, in Brazil, the phenomenon has been met with little popular uproar.[10] While U.S. law enforcement agents have killed 11,090 people over the past 30 years, their Brazilian counterparts have killed 11,197 people in a period of just five years.[11] Still, despite episodic demonstrations, a growing movement like the one in the United States seems to be absent from Brazilian society and politicians feel comfortable in boasting how many people they killed while security officers.[12]

Police officers too often turn to violence as their first resort because they view criminals as deviants beyond reform.[13] Additionally, they often view arresting criminals and imprisoning them as fomenting crime, rather than fighting it, since many jails are controlled by criminal organizations. In the state of Rio de Janeiro alone, the police killed at least 563 people in 2014, a 35 percent increase from the year before, according to the state’s Institute of Public Security.[14] Across Brazil, police killed an average of six people a day between 2009 and 2013.[15]

Especially alarming is the increase in the numbers of young Brazilian men killed by the police, particularly those of African descent. More than half of those killed in 2012 were men under the age of 30 and two-thirds were identified as black, according to the U.N. report on violence in Brazil. While many of these young men are involved in criminal activity, many others were innocent, killed by police by mistake.

Although Brazil was a slave colony and nation—it imported 5 million slaves, 10 times more than the United States—and was the last country to end slavery (in 1888), issues of race are seldom discussed.[16] Many view the country as one free of prejudice and believe there is a “racial democracy” because the country never had laws separating the races as in the United States. However, there is an increasing body of research revealing the prejudice and racial disparity in Brazilian society. A study by the University of São Carlos concluded that 58 percent of all people killed by the military police in the state of São Paulo were black.[17] Ignácio Cano, a researcher from Rio de Janeiro State University, has found that blacks in Rio de Janeiro are three times more likely to be wounded or killed by police than would be expected by their share in the population.[18]

Regardless of their skin color, however, the deaths of young Brazilians are often seen as the inevitable price that must be paid in police efforts to fight crime. Yet, current and former police officials run much of the country’s criminal activity.[19] These officers perpetrate violence through membership in militias, criminal organizations that often operate with impunity.

Last year, in a case decidedly similar to the recent one in Manaus, the killing of 10 civilians in a northern Brazilian city by a group of masked men brought attention to this issue.[20] The men were suspected to have been seeking revenge for the killing of a police officer that was accused of being involved in a militia. With precedents such as this one, many have speculated that the recent series of murders in Manaus are new cases of police-related violence.